Shares of Ares Capital (NASDAQ:ARCC) hit a 52-week high yesterday. Let's take a look at how it got here to find out if it can vault even higher.

How it got here
Why do investors like to put money in firms like Ares Capital? It's usually not because they're fans of companies named after ancient pagan gods. Rather, it's the dividends they spit out on a regular basis.

Ares is a business development company (BDCs), basically a lender to small- and medium-sized enterprises (SMEs) seeking capital but unwilling to take on relatively pricey bank debt, launch an IPO, or partner with a venture capital outfit. The government, smartly realizing that SMEs are the motor of any economy, has encouraged investment in BDCs by essentially mandating that they pay out 90% of their profits as disbursements to shareholders.

That's why their yields are so strong relative to the payouts of traditional companies. At the moment, they big players in the sector are generally hovering a bit below the 10% mark.

Ares isn't a standout in this respect -- fellow deity Apollo Investment (NASDAQ:AINV) has it beat, and BlackRock Kelso Capital (NASDAQ:BKCC) stands just above the double digits -- but its yield is certainly holding its own despite the recent run-up in share price. 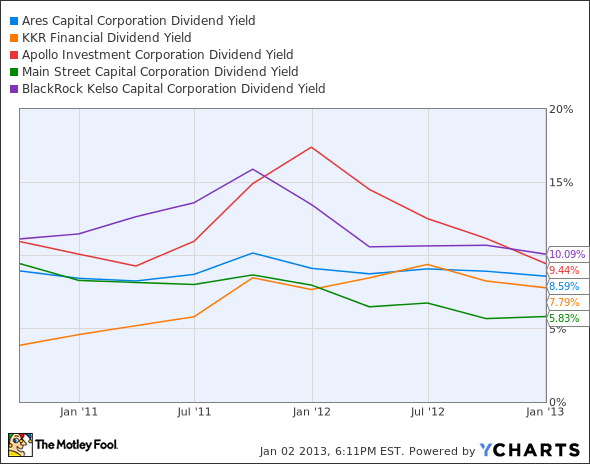 Like the better BDCs out there, Ares has been a reliable payer over the years. And a rising net profit has lifted the dividend boat; the company has boosted its payout three times over the last year and a half. Starting at the end of 2011, the $0.35 it disbursed for 10 quarters in a row was increased steadily to the current $0.43.

Dividends are particularly hot at the moment because they've dodged a very big Federal bullet. If the fiscal cliff went unavoided, dividend recipients would have plummeted to the ground. This is because one automatic tax increase that would have kicked into effect was a hike on -- right! -- dividends. Instead of the traditional 15% rate, they would have been taxed as ordinary income, which carries rates that can be significantly higher.

Sanity prevailed, however, and the lawmakers kept that 15% intact (save for individuals who make above $400,000 annually and couples taking in over $450,000, both of whom will have to fork over a not-very-onerous 20%). So it wasn't surprising that BDCs would see a lift on the news. Since Ares is the largest star in the BDC galaxy in terms of market cap, it's no wonder the company's shares moved northwards.

A lender of first resort
It's not only size that matters. Investors are also encouraged by Ares' financial performance of late. All of the company's key financials have grown encouragingly over the past few quarters; revenue was $218 million in 3Q, or 57% higher than in 2Q. Meanwhile, net saw a quarter-on-quarter gain of an even 50% to land at $137 million.

What helps is that the company has skillfully integrated the assets of Allied Capital, the big, notorious BDC that went belly-up a few years ago after nearly half a century in business. In 2011, the first full year of Allied's consolidation in Ares, the bulked-up company posted revenue of $731 million, up sharply from 2010's $529 million and more than three times 2009's figure.

It also did a fine job assuaging the dividend tax fears of its investor base. Like many other companies staring down the cliff face and seeing big tax increases at the bottom, it found the cash for a special dividend payout by the end of last year.

But not to any damaging degree -- that baksheesh amounted to $0.05 per share. This struck a nice balance between reassurance and damaging financial sacrifice. And it was almost certainly a factor supporting the stock's rise.

What's next
Ares' rally might yet have space to run. The one major asset class that boasts yields comparable to those of BDCs is the REIT sector, and many of those stocks are struggling at the moment. Of particular concern is the market for the mortgage-backed securities some of the big REITs rely on, a market that's getting squeezed by increased demand.

This has affected their dividend payouts, which have gone down while those of BDC's are typically steady or rising. So it's no wonder that top REITs like Annaly Capital Management (NYSE:NLY) and Capstead Mortgage (NYSE:CMO) have seen their stock prices drop considerably in recent weeks.

BDCs aren't currently grappling with such a tough issue, and they're doubtless benefiting from the flight to more solid dividend payouts. In the case of Ares, it also helps that the company's financials are sturdy as well, and the market is bullish in the wake of the fiscal cliff deal. Ka-ching!