Next week is the weeklong technophile extravaganza we all know and love. The Consumer Electronics Show kicks off in Sin City on Jan. 8 and lasts through Jan. 11, and OLED display technology is expected to have an wider presence this year than in previous years. Will that boost OLED pioneer Universal Display (NASDAQ:OLED)?

Last year, OLED TVs were shown off by both Samsung and LG, Universal Display's two largest customers. Showing off is one thing, but actually shipping them for sale is another altogether, and neither company has actually sold an OLED TV yet.

LG is looking to take home the title of the first company to sell OLED TVs and has now announced that it's launching its 55-inch OLED TV in South Korea and is expecting to ship the TV sets in February. Consumers looking to procure one will have to fork over approximately $10,000.

Prices like that mean that mainstream adoption remains farther off, but the manufacturers have to start somewhere. One of the big benefits of an OLED TV is they can be incredibly thin. LG's model is just 4 millimeters thin. Hopefully, Samsung will disclose information on pricing and availability so investors can get a better idea of when more OLED TV models will hit the market.

In fact, Samsung has even been teasing a new TV design that's "unprecedented" and "timeless," leading up to CES. The teaser image is a bit mind-boggling. Is Samsung preparing to launch a portrait-oriented TV? Could it be transparent? Will it have an OLED display? What in the world is going on here? 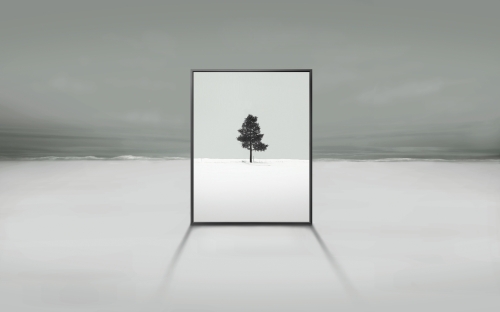 Samsung and LG are leading the way in the OLED TV market, but the devices probably won't see meaningful unit volumes until 2014 or later as they work down the cost curves.

TVs giveth, and TVs taketh
For Universal Display, the delay of OLED TV production was precisely why it got crushed after last quarter's earnings. Management's guidance had been expecting material sales to rise heading into a TV production ramp, but OLED TV delays required the company to significantly reduce fiscal 2012 revenue guidance from a range of $90 million to $110 million to a lower ballpark of $80 million to $82 million.

That also left Universal Display with a glut of inventory -- about two and a half times higher than where it started the year and carrying $9.5 million of it on the books at the end of last quarter.

Bullish pair
Several Street analysts were out earlier this week with hopes that CES would give OLED technology some press time and boost Universal Display accordingly.

JMP Securities analyst Alex Gauna believes the added visibility with product pipelines will bode well for the company, as these 55-inch OLED TVs are on the horizon along with 5.5-inch flexible OLED displays. Gauna believes that flexible displays could be featured in the next batch of high-end smartphones such as Samsung's Galaxy Note III or the "X Phone" that Google (NASDAQ:GOOGL) is reportedly working on at its Motorola subsidiary. He predicts that 2013 will be a big year for OLEDs, driven by increased smartphone penetration.

Cowen & Co. analyst Robert Stone also thinks super high-resolution OLED displays will be positive catalysts, like a 5-inch AMOLED display with 441 pixels per inch. Stone also believes that Universal Display's heavy short interest could propel a rally if those shorts start to get squeezed. He notes that 27% of Universal Display's float is held short. As of Dec. 14, there were 9.6 million shares held short, which, while down from the peak of 14.4 million in May, still shows there are plenty of bears out there.

Universal Display ended up losing 21% in 2012. Hopefully the stock will fare better in 2013 as OLED adoption picks up and the TV industry approaches mainstream adoption of OLEDs. CES might bring plenty of good news for Universal Display next week.