The biggest investment story of the past decade is that stocks went nowhere. The S&P 500 (SNPINDEX:^GSPC) is lower today than it was in 2000. Dividends provided some return, but inflation eroded it out. It has been a dreadful decade for stocks.

But this chart might be the best rebuttal to the "lost decade" argument, and perhaps the most important chart of the past decade: 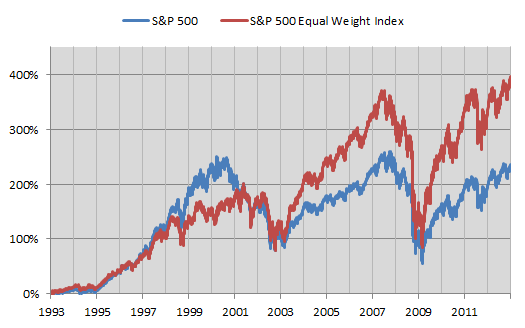 What we're looking at here is:

Unlike the traditional S&P 500, the Equal Weight Index is at an all-time high. It's more than doubled since 2000, providing investors with a solid return.

The reason the two indexes strayed so far apart is simple: Megacap companies were all the rage in 2000, making them some of the most overpriced. And since the traditional S&P 500 weights its components by market cap, it was weighted heavily in the market's most overvalued companies.

Look at the S&P 500's largest holdings in 2000 and their subsequent performance.

These 10 companies made up more than a quarter of the S&P 500 in 2000. And with a few exceptions, their performance has been an utter bloodbath ever since.

The Equal Weight Index, however, gave each of these companies a weight of just 0.2%, so colossal losses stemming from the megacap dot-com busts had a much smaller impact.

That fact alone has kept the S&P 500's returns low for the past decade relative to the Equal Weight Index.

So the average stock has actually performed well over the past decade. The S&P 500 has done poorly because a handful of companies were grotesquely overvalued a decade ago, and those companies made up a disproportionate share of the index.

This also goes the other way: In 1999, just two companies, Microsoft and Cisco, accounted for one-fifth of the S&P 500's total return.

The important question is, why does the S&P 500 weight its components by market cap? Last month, I interviewed Robert Arnott, CEO of Research Affiliates and a pioneer of alternative index strategies. He told me, "The S&P 500 was never intended as a strategy; it was intended to measure how the market is performing." In Arnott's view, it makes more sense for indexes to weight companies by their economic footprint -- things like revenue, earnings, and dividends.

By beating most active managers most of the time ... [the S&P 500] gained tremendous traction, and people didn't look at alternatives.

Just imagine if in 1957 the S&P had said: "Here's an S&P 500 that tracks the market. It's cap-weighted, and by the way, we're doing a sister index, S&P Profits 500, that weights companies by their profits." The latter would have trounced the former, and cap-weighted indexation would never have gained popularity.

So it goes. Just a reminder that what's popular isn't always what's best.