To help Foolish investors better understand the oil and gas boom in the United States, we are putting together a series of articles focusing on the major energy plays in the Lower 48. We'll need to rely heavily on these areas to achieve North American energy independence. Today we're going to take a look at the Niobrara formation in the Powder River and Denver-Julesberg Basins. 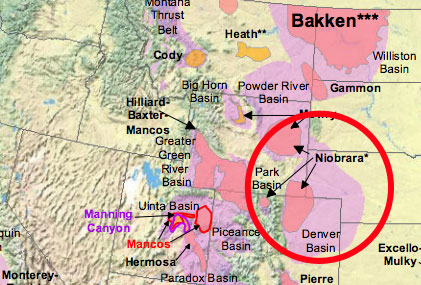 The organic-rich formation consists mainly of shale and carbonate layers from a former marine environment. Although it's typically referred to as a shale formation, Niobrara has significant layers of chalk and limestone as well. Niobrara is mainly a liquids-rich play, namely oil and natural gas liquids. The resources are found anywhere between 3,000 feet and 14,000 feet, with most of the oil located about 7,000-8,000 feet down, while the biogenic natural gas is at depths around 3,000 feet.

Here's a breakdown of their net land acreage:

You can see that Anadarko leads the pack with over 1 million net acres, followed by Noble and Chesapeake. Land leases can change quickly, though, and they're not the only indicator of which companies are strongest in the play – production is key. 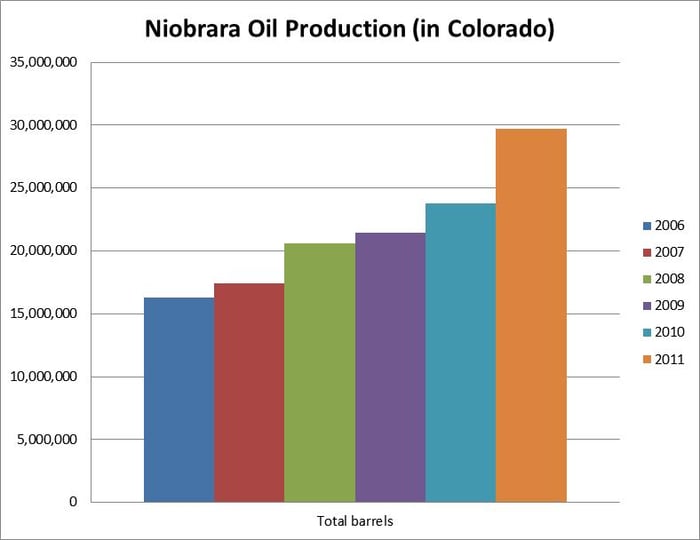 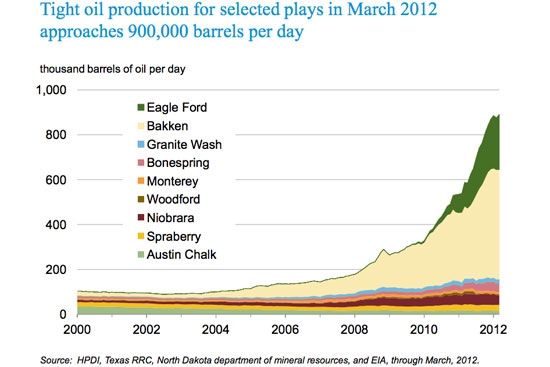 You can see that through March 2012, Niobrara tight oil production is significantly lower than the Eagle Ford, Bakken, and other plays. The formation hasn't produced as much oil as companies originally anticipated. Many companies won't drill wells until they've taken a 3-D seismic image of possible well locations to determine if there's enough oil to start drilling. This doesn't necessarily mean that production in the Niobrara won't ramp up in the future, but for now it doesn't come close to the Bakken.

In 2012, there were about 45 active rigs in the most productive area of the Niobrara formation, the Denver-Julesberg basin. That's four more than in 2011. Of those rigs, 40 of them were located in Colorado's Weld County.

Drilling economics
Depending on the company you keep, you may have heard whispers of the Niobrara Shale being called the "neo-Bakken." It has received that name thanks to the favorable preliminary estimates for the play and the high quality crude it produces.

Oil quality is measured by a couple metrics, one of which is API gravity. It is an empirical metric designed by the American Petroleum Institute to measure how light oil is in comparison to water. A number greater than 11° means it floats on water, and greater than 31° is considered a light oil. These light oils have a higher percentage of end products, like gasoline and jet fuel, and are easier to refine, and thus are more desirable. Recent crude in the Niobrara Shale has an API gravity ranging from 35° in the Powder River Basin to 58° in the southern Denver-Julesberg Basin. Bakken crude, from the region with a reputation for high quality crude, has an average API gravity of 42°, so Niobrara crude could prove to be a refiners dream.

In terms of oil production, the Niobrara is the youngest of the tight oil plays in the U.S. Production in the region with modern drilling technology started up in 2010, almost 10 years after its neighbor to the north. Based on preliminary studies, though, it may have been well worth the wait. The Niobrara Shale is believed to have almost 100 billion more barrels of oil than the Bakken, its average well costs are about $2.5 million less, and it has a higher recovery percentage, according to the a December report by the Oil & Gas Journal.

The well completion costs are less than in the Bakken in large part due to the shallower drilling depths needed to reach the Niobrara Shale. A recent drilling report from Encana (NYSE:OVV) said that its average well depth in the Niobrara is at about 7,300 feet, compared to typical depth of drilling in the Bakken reaching well below 10,000 feet.

Before shouting the praises of the Niobrara, there are three signs that make the play a little less lucrative. One big risk for the region is the variance in well potential. Rex Energy (NASDAQ: REXX) reported back in November that it had drilled two duds, and some of SM Energy's (NYSE:SM) wells have initial productions as low as 250 barrels of oil equivalent per day. Conversely, Chesapeake seems to have found some very lucrative wells in the northern tier of the play. Back in August, the company reported wells in the Powder River producing as much as 2,400 barrels of oil equivalent per day. The high-risk, high-reward environment in this region could make for elated investors or endangered companies.

Another major disadvantage for the region is the lower projections for estimated ultimate recovery, or EUR. That same Oil & Gas Journal report projects that EUR for a Niobrara well will be less than half that of a Bakken well. While this could be a major concern, keep in mind that this is still a very young play and several companies have yet to find the most lucrative wells.

Finally, similar to the EUR rates, the decline rates for Niobrara wells are very high. Some first-year decline rates are as high as 90% for the play. So while initial production at these wells could be great, they could subsequently fall to a level that makes them no longer commercially viable. If this does prove to be the case, expect companies who specialize in enhanced oil recovery techniques, like Denbury Resources (NYSE:DNR), to come in to the play in a couple of years and snatch up some of the less productive wells.

Companies who are producing in the region have taken a much more tempered approach than in some of the other plays in the U.S. After getting burned because of oversupply gluts in 2012, several exploration and production companies are looking to keep production in the Niobrara slow enough so the region doesn't have the same growing pains that the other regions experienced.

One of the largest hurdles the region needs to address in order to make the Niobrara Shale play more lucrative is the build-out of takeaway capacity from the region. This comes back to the play being so young. Historically, much of the production in the region has been refined and consumed locally. Now, with an expected rush of production, there will be a large expansion of transportation infrastructure. Kinder Morgan (NYSE:KMI) is in the process of converting their Pony Express gas pipelines to move oil from the Bakken and Niobrara to Cushing, Okla. 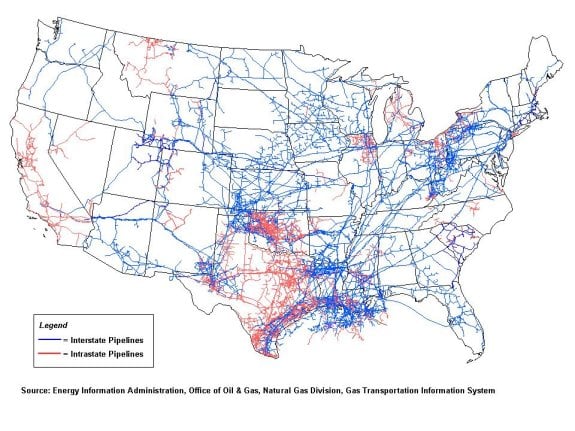 The next problem, though, is that Cushing is still on the verge of overflowing. Takeaway capacity for the West Texas Intermediate price point has yet to be completed. Both Enterprise Products Partners (NYSE:EPD) and TransCanada (NYSE:TRP) are in the process of expanding takeaway capacity from Cushing to the Gulf of Mexico by 1.4 million barrels a day. Once takeaway capacity is able to handle a larger load, expect Niobrara production to ramp up.

So you want to buy a piece of Niobrara?
There are still large tracts of land being held by federal and state governments. This is in part why mergers and acquisitions have been relatively quiet for much of the region. Several companies are still able to pick up large chunks of acreage within the play by buying from state auctions. Undeveloped land tracts in the Powder River Basin have sold at auction for as much as $1,500 an acre. Back in April of 2011, Marathon Oil sold 30% of its operational stake of 181,000 acres for $270 million to a Japanese firm. This amounts to about $1,500 per acre for land that, at the time, only had 18 exploratory wells without any significant production.

What these Fools believe
The Niobrara formation may have a lot of oil, but it just hasn't panned out quite the way companies have wanted. Production has been lower than previously expected when the drilling push began in 2010, but it doesn't mean Niobrara is slowing down. Many companies are still very active in the play, but it may take them longer than usual to get to the production rates they want.

Investors should keep an eye on three things: land lease sales, production, and takeaway capacity. If companies start selling large portions of their leases without picking up new tracts, it could indicate that they aren't able to produce the amount of oil they want from Niobrara. But even if companies don't dump large portions of their land leases, investors should continue to watch the production levels to see if companies can figure out a way to efficiently draw oil out from Niobrara.