There were three economic reports this morning.

This morning the Department of Labor announced that initial jobless claims rose to a seasonally adjusted 371,000. That's 4,000 above last week and higher than analyst expectations of 365,000. The rise brings the four-week moving average -- a more stable measure of the jobless trend -- to 365,750. 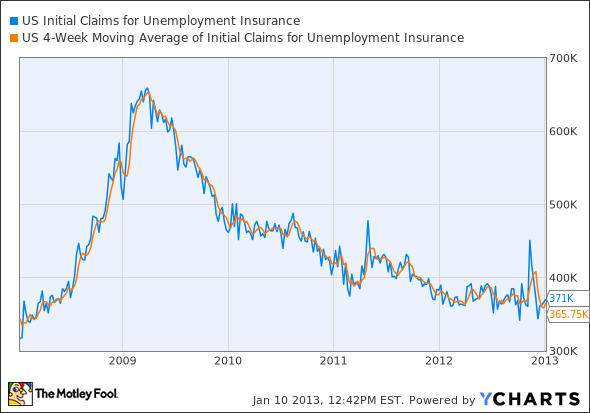 The second economic release was also from the Department of Labor, which reported that job openings rose slightly to 3.68 million in November, up 10,000 from October. Year over year, job openings are up 12%. The third and final release of the day was from the Department of Commerce, which reported that inventories rose 0.6% in November, accelerating from October's 0.3% growth. Inventories have risen 7% in the past year as the economy has strengthened.

After an upbeat report from Alcoa, things are looking up for earnings season, so it's no surprise that the market is up.

Today's Dow leader
Today's Dow leader is Bank of America (NYSE:BAC), up 2.8%. Banks' financial results are highly dependent on the health of the economy, so financial stocks are up on the relatively positive economic releases today.

Bank of America had a huge year in 2012. The bank's stock soared 107.3% in 2012 as the bank settled with 49 states over the robo-signing fiasco, estimated its future liabilities to Fannie Mae and Freddie Mac, divested noncore operations, and significantly improved its financial situation. More recently, the stock has been rising as the U.S. housing market continues to improve. The strengthening economy, among other factors, is why Fool analyst Amanda Alix thinks Bank of America can hit $20 per share before the summer. Click here for her take.