Stop me if you've heard this one before: Apple (NASDAQ:AAPL) has monster growth opportunities in China. During the week, CEO Tim Cook was quoted during an interview with Xinhua News Agency as saying he strongly believes that China will become Apple's biggest market, overtaking the U.S. for the first time ever.

China is currently our second largest market. I believe it will become our first. I believe strongly that it will. We are growing very fast. We are continuing to invest in retail stores here and will open many more over the next several years. We have some great sites selected, our manufacturing base is here, and we have incredible partners here. So it's a very, very important country to us.

What would it take for this to actually happen?

Apple's Greater China segment, which includes Mainland China, Hong Kong, and Taiwan, has posted incredible growth for Apple over the past few years, both in terms of absolute dollars and in the geography's percentage of total revenue. Unsurprisingly, Apple's U.S. home turf has long been its largest market, but that could easily change within the next few years. 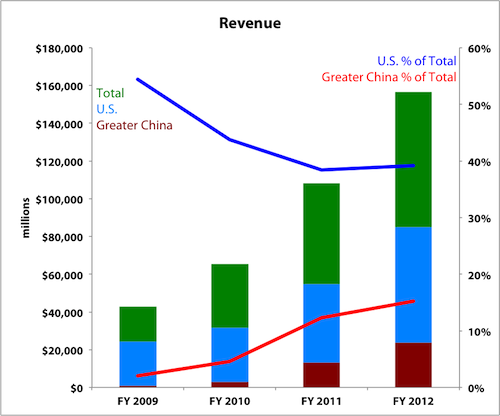 In fiscal 2009, the U.S. generated $23.4 billion in revenue, while China was only approximately at $858 million. Those figures represent 54% and 2% of total sales, respectively. But in fiscal 2012, China's contribution to the top line rose to 15%, as domestic sales were just 39% of Apple's total revenue.

From 2009 to 2012, U.S. sales grew at a compound annual growth rate of 27.3%, far short of the 129.5% CAGR that Greater China put up. However, China's four-year CAGR is a little misleading, because it's coming off such a small base, and Apple can't be expected to double sales in Greater China every year. The U.S. four-year CAGR is more realistic, since it's a mature market and sales could conceivably grow at this rate in the near future.

If Apple grows U.S. sales by 20% annually while China grows at 70% annually, Greater China would surpass the U.S. to become Apple's biggest market in three years.

As it stands, the U.S. still generates more than two and a half times as much as Greater China, so the Middle Kingdom still has a way to go before it can become Apple's top contributor. How will it get there?

Retail
Apple now has 11 stores in Greater China: eight in Mainland China and three in Hong Kong. Growing its retail footprint is an important aspect of Apple's local presence. The company has also fallen short of some of its prior plans. At the 2010 annual meeting, then retail chief Ron Johnson said that Apple was planning to open upwards of 25 retail stores in China over the next few years.

Well, it's been nearly three years since then, and Apple's shy by quite a bit. Apple needs to make up for lost time, and Cook's comments point to aggressive retail expansion in the region.

China Mobile
Investors are widely expecting Apple to finally enter into a deal with China Mobile (NYSE:CHL) this year, giving Apple access to a subscriber base of 707 million. The nation's two smaller carriers offer the iPhone and have grown their share of the 3G market as a result.

This partnership has been a long time coming, but both companies would benefit once it's inevitably inked.

It's on the horizon
It will be a milestone when China becomes Apple's largest market, especially if you consider the breathtaking speed at which it may happen. If it happens in three years, Greater China will have gone from being 2% of revenue in fiscal 2009 to its biggest revenue generator in 2015. That's not too far away.