Earnings season is barely a week old, and already the surprises are mounting up. On the plus side of the scorecard, the leader so far is seed tech giant Monsanto, which reported nearly double the profits that analysts were expecting. Already at a multiyear high, Monsanto is starting 2013 with a bang.

But this isn't Lake Wobegon, where all the companies can be above average. We've also seen our share of earnings misses. Let's take a closer look at three of the biggest whiffs so far.

1. Chipotle (NYSE:CMG)
Chipotle released preliminary fourth quarter results and food-cost inflation took a big bite out of profits. Analysts expected earnings of $2.09 a share, but Chipotle's early results peg that figure at just $1.95. And more expensive ingredients made all the difference. Food costs are coming in a full 1.3 percentage points higher this quarter, comprising 33.5% of sales. That cost bump was more than enough to swamp what would have been solid growth for the quarter.

After all, the top-line number still looks healthy. Chipotle kept its traffic figures humming, and expects sales to come in at about $700 million. That's a 17% jump from the year-ago quarter and also a bit higher than the $690 million that the Street was expecting. Comparable-store sales growth should be 3.8%, which is a tad below the "mid-single digit" bounce the company had forecast last quarter. As for the future, Chipotle is "optimistic that food inflation will level off in 2013." But that's actually nothing worth feeling optimistic about. Chipotle needs cost growth to reverse, not simply level off, if it's going to reverse the slide on profitability this year. Until then, the company will have a tough time justifying a P/E multiple that's so far higher than its peers.

2. KBR (NYSE:KBR)
Thanks to a surprisingly expensive fourth quarter, the engineering and construction services company took a hatchet to its full-year earnings estimate, cutting it from $2.70 a share to just about $2. KBR blamed "significant" project charges in its U.S construction and minerals divisions for the shortfall. The minerals business was already a slight drag on KBR's income, reporting a $4 million loss last quarter. As for this quarter, the company didn't give much detail about the new project costs, except to say, "[W]e have take steps to resolve the issues giving rise to these charges." If this is a one-time event, then investors don't have much to worry about, as KBR's pipeline of projects looks strong.

And at least KBR is confident that its cost issues will be resolved. It just issued guidance for 2013 earnings, which, at a range of $2.45 to $2.90 a share, is a bit below analysts' expectations for $2.60 in profits. But that forecast might prove conservative, as it doesn't include any new major hydrocarbon projects that the firm might win over the year.

3. Tiffany (NYSE:TIF)
Tiffany also surprised investors with an unwelcome update to its fourth-quarter expectations. The company said holiday sales growth was disappointing, and so full-year earnings will be well below the guidance it issued in late November. And that forecast was itself ratcheted down from an earlier estimate. All told, Tiffany now expects around $3.20 in profits for the year, as compared to the $3.75 it was calling for as recently as late August.

Tiffany can't blame a general slowdown in the luxury goods market, either. Coach (NYSE:TPR) sales have held up well. The company reported an 11% bump in revenue last quarter, with the North American market turning in an impressive 8% rise. And more recent results suggest the high-end market held up fine through the holidays. Department store Nordstrom (NYSE:JWN) reported one of the best comparable sales increases, 8.6%, of all retailers over this shopping season. That sales growth came from both Nordstrom's outlet locations and from its full-price stores.

Coach's and Nordstrom's gross profit margins have also held up better than Tiffany's over the past two years: 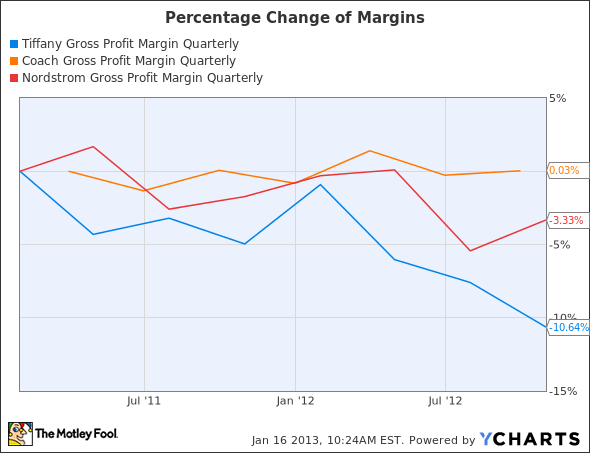 Foolish bottom line
That's why of the three misses, Tiffany's is the most concerning. While Chipotle and KBR lost control of their costs this quarter, I see them recovering by fixing that weakness. And next quarter's results should explain a lot about whether they've made any progress there. But Tiffany's fall is three quarters running now, and it's pressuring both profits and sales. So there's every reason to expect more misses in the quarters ahead.