To help Foolish Investors better understand the oil and gas boom in the United States, we're putting together a series of articles focusing on the major energy plays in the 48 contiguous states. We'll need to rely heavily on these areas to achieve North American energy independence. Today we're going to look at the Barnett Shale.

Introduction
The Barnett Shale is the largest natural gas play in Texas and may be one of the largest on-shore natural gas plays in the United States. The shale is located in the Fort Worth Basin in Northern Texas and spans about 5,000 square miles. It encompasses about 18 Texas counties and holds a large amount of gas directly under the city of Fort Worth.

Barnett is an organically rich and thermally mature formation that averages about 7,500 feet in depth. The shale has been tapped for natural gas in the past, but it wasn't until the mid 2000s when production increased because of hydraulic fracturing and horizontal drilling techniques. 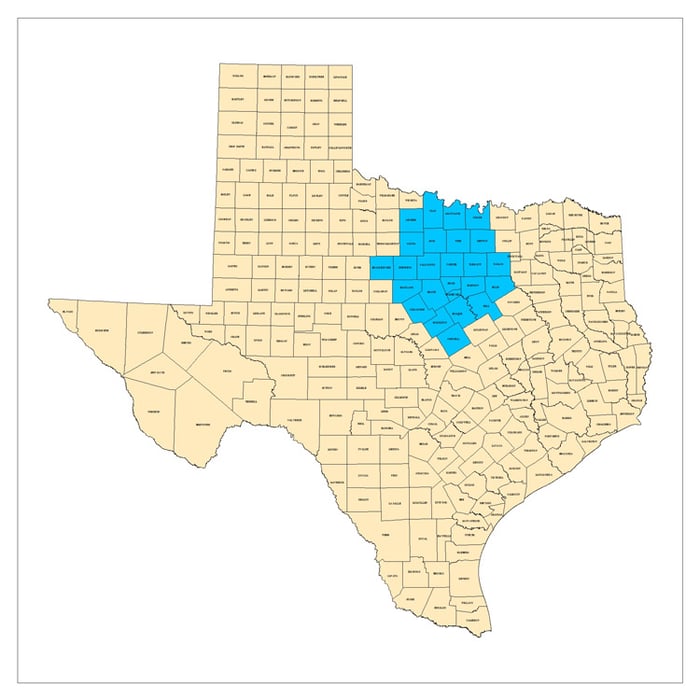 According to the U.S. Energy Information Administration, the Barnett Shale has about 44 trillion cubic feet (tcf) of natural gas, with about 24 tcf being technically recoverable.

The bosses of Barnett
In any gas play, companies try to buy up the biggest tracts of lucrative land. Three of the top four landholders in Barnett are Devon Energy (NYSE:DVN), EOG Resources (NYSE:EOG), and Chesapeake Energy (NYSE:CHK). Although land doesn't necessarily translate into production, for Devon and Chesapeake it has. Devon got in early on the Barnett play with its purchase of Mitchell Energy back in 2002, which gave the company a jump on production before everyone else. Devon has invested a lot of money in the Barnett -- $1 billion  in 2011 alone -- and lately the company has focused on the more lucrative natural gas liquids in the Barnett.

Chesapeake Energy is almost always a dominant force in land ownership when it comes to natural gas plays, and the Barnett is no different. Although the company is one of the leading producers in Barnett, Chesapeake has cut its overall natural gas production and says its Barnett production is already down from its peak in early 2012. In 2008, Chesapeake had 40 rigs in the Barnett, but that number has dropped to just two now.

EOG has large amounts of land resources in the Barnett Combo Play, which means it has access to the more profitable natural gas liquids, or NGLs. In 2012, NGLs accounted for about 86% of EOG's production in the Barnett. EOG's focus on liquid natural gas should help the company remain a strong contender in the area, compared with competitors who are highly leveraged in the Barnett's less lucrative dry natural gas.

Here's the breakdown of land leaseholders by net acres: 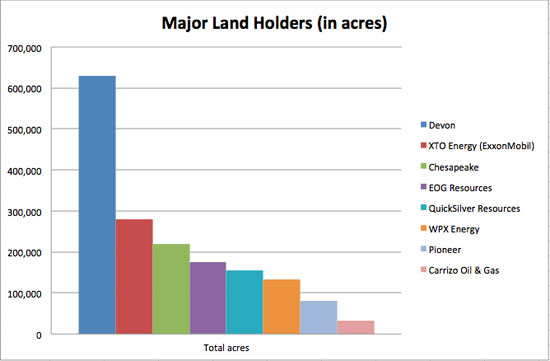 Barnett production
Acreage is only part of the gas play equation -- production is what matters most. The Texas Railroad Commission posts Barnett Shale production information, and the latest data (up to July 2012) shows the top gas producers: 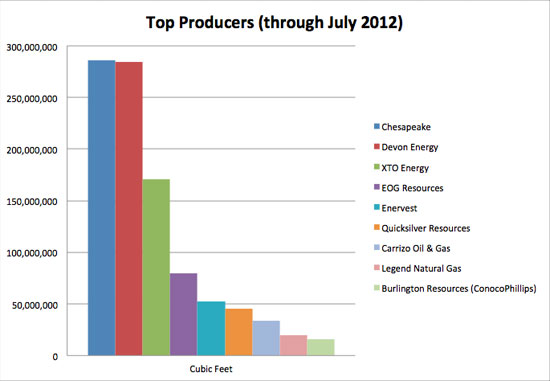 Devon Energy and Chesapeake far outpace the other players, with XTO Energy, a subsidiary of ExxonMobil, taking the third spot.
Although Barnett has been drilled for decades, it wasn't until the mid-2000s that production skyrocketed, because of horizontal drilling and hydraulic fracturing. From 2004 to 2010, the number of horizontal producing Barnett wells spiked from 400 to more than 10,000. Here's a look at the increase in natural gas production from 2000 through mid-2012. 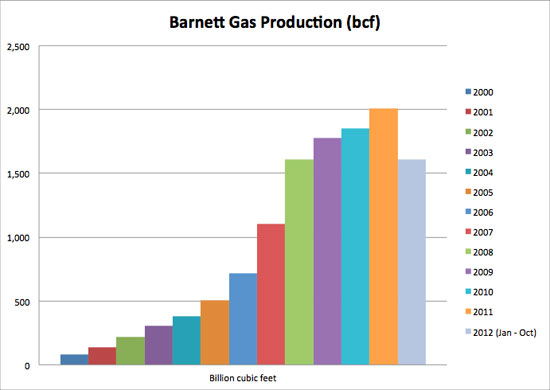 Since 1993, the Barnett Shale has produced more than 12 trillion cubic feet (tcf) of natural gas.

Although production has been high from the Barnett, the amount of active rigs dropped in 2011 to its lowest level in seven years. One possibility for the decrease in rigs may be that companies use multi-well pad drilling and multi-stage fracking techniques to increase well efficiencies. Another likely reason is that natural gas prices are down and companies have moved some of their operations to more liquids-rich plays.

Drilling economics
In unconventional shale-play years, the Barnett is almost ancient. Modern drilling techniques were used in the Barnett shale for nearly a decade before some of the new players, such as the Haynesville-Bossier and Marcellus, even got off the ground. Much of the data used to determine the ultimate recovery of shale wells is based on field values from the Barnett region. This is the 15th year in which companies have drilled in the shale using horizontal drilling and hydraulic fracturing.

After the boom in drilling from 2006 to 2011, we're starting to see a slowing down of drilling activity in the play. That's resulting a production plateau, and some of the younger plays are starting to catch up.

Back in February of last year, the Haynesville play surpassed the Barnett as the most productive shale region in America. 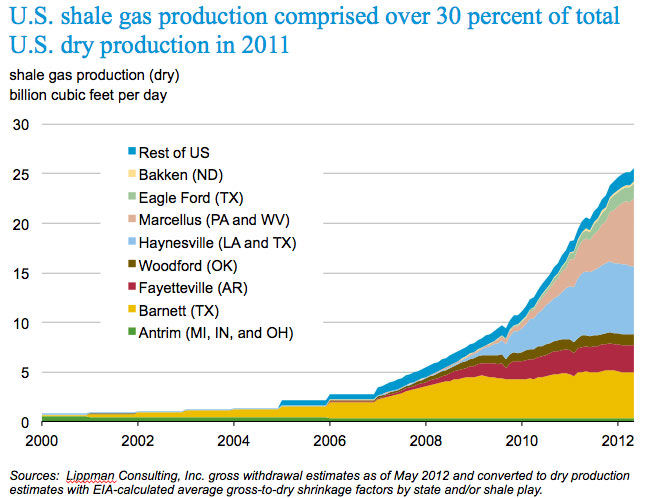 But who says you can't teach old dogs new tricks? One of the big emerging stories in the Barnett has been what is called the Barnett shale combo play. This region has emerged as a section of the shale that offers 55% liquids production to what has been considered an almost pure gas play. Both EOG and Pioneer Resources have the most land holdings in this part of the shale, and they are also responsible for most of the drilling activity for 2012.

With an average drilling depth of about 7,500 feet across the whole play, companies have reported well completion costs to be in the $3.5 million range. According to the EIA, costs for wells have increased in the past four years, so it's likely that many cost efficiencies have already taken place and it's becoming more and more difficult to drill. While the estimated ultimate recovery, or EUR, for Barnett is rather paltry at 1.3 billion cubic feet per well, the number looks more attractive when you consider the expected EUR versus the costs to drill a well in the play.

This table gives you an idea how much bang a company can get for each buck used in the play. So while Barnett might not be able to hold up to the Woodford, it's a better value than the Marcellus or the Haynesville-Bossier. Also, decline rates for wells in the region are high. A well in the field will undergo a 70% production drop after one year of drilling. That's no as high as the numbers for some of the other unconventional gas plays, but it still brings the long-term commercial viability of a well into question. 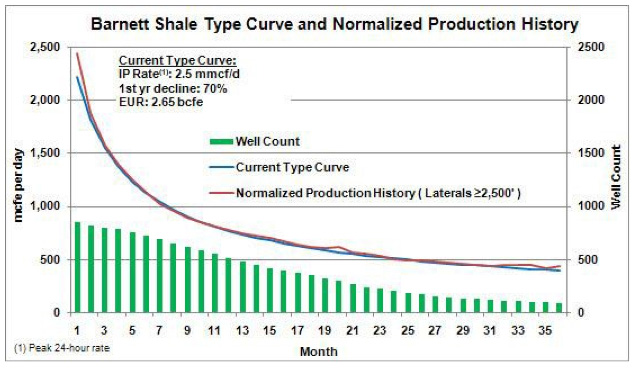 Since the field is older, it has the advantage of having an infrastructure in place that can handle the capacity of the region. This means companies looking to move their products outside the region to pursue the best price will be able to do so much better than some of the other regions that have yet to build out their takeaway capacity.

So you want to buy Barnett?
In 2011, there were two major transactions that help to give a picture of the costs associated with the Barnett. In November 2011, Encana (NYSE:ECA) agreed to sell 50,000 acres and all its assets in the acreage to private holding company EnerVest for $975 million, or about $19,000 an acre. Similarly, Range Resources (NYSE:RRC) sold its 52,000 productive acres back in March 2011 to a private company for $900 million, or $17,000 an acre. These numbers may seem high in comparison with some of the more speculative shale plays in the U.S., but keep in mind these properties are proven reserves with a stronger takeaway capacity.

Since then, thanks to falling gas prices, so, too, is the price of acreage in the play. Atlas Resource Partners bought 12,000 acres from Carrizo Oil & Gas back last March for $190 million, a number closer to $15,000 an acre.

What these Fools believe
Production expectations for Barnett have tapered off a bit recently, but some companies remain optimistic that the play will produce enough gas to remain profitable. As with other plays, companies need to maintain well efficiencies to get the most out of the Barnett.

While it's very possible that the Barnett has already seen its best days pass as a shale play in the U.S., the possibilities in the Barnett Shale Combo Play could help the region hang on for longer as a critical part of the North American energy picture. Weaker players in the region are trying to shed their positions so they can focus more on other plays where they already have a stronger presence. This trend will probably continue, provided we don't see a large jump in natural gas prices.

One company that's remained strong in the Barnett is Chesapeake Energy. The company is one of the top producers in the play and is the second-largest natural gas producer in the United States. In our recent premium report on Chesapeake, we examine how the company has shifted its business strategy and what it means for investors. You can get your own copy of this report by clicking here.