The analyst community was expecting Intel to earn $0.45 a share in net profit on revenue of $13.53 billion, but earnings came in at $0.48 a share on revenue of $13.5 billion, declining 3% year over year. CEO Paul Otellini continued to call the operating environment "challenging," stemming from the continued weakness in PC demand. Last quarter, Gartner and IDC estimated that worldwide PC shipments declined between 4.3% and 6.4% from the year before, falling directly in line with Intel's reported decline of 6.4% in its PC client group division.

Expenses on the rise 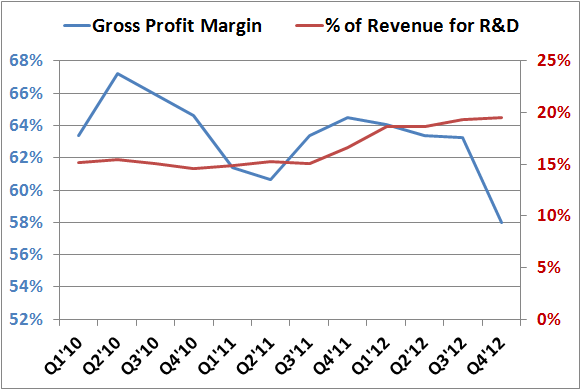 Intel's gross margin primarily took a hit as a result of excess capacity charges stemming from actions to reduce inventory levels and relocate resources toward its upcoming 14-nanometer process.

Not to be confused with research and development spending, Intel expects its capital expenditures to grow from $11.3 billion in 2012 to $13 billion for full-year 2013, a pace that's expected to grow faster than full-year revenues. The company is investing heavily in its upcoming 450-millimeter wafer transition, which will allow Intel to reap the benefits of a greater economy of scale later this decade. If you back out the $2 billion for these wafers, Intel's capital expenditures will be relatively flat from 2012. The remaining $11 billion will be primarily going toward constructing 10 14-nanonmeter foundries, which, according to Paul Otellini, are critical for Intel's future. Leading-edge capacity bears the lowest cost for Intel on a per unit basis, has the highest performance, and generates the lowest power. In Otellini's words, "the world's leading-edge fabs are the single greatest asset we have."

All that hype about tablets and smartphones driving new server demand turned out to be not as robust as expected. In the past, Intel had hinted that 122 tablets or 600 smartphones would be enough traffic to occupy one server. Considering that Gartner estimated over 650 million smartphones and 110 million tablets shipped in 2012, you would expect that Intel's data center group saw relatively strong demand. However, the data center platform actually saw a decline of 1% in terms of unit volume on a year-over-year basis, and zero growth sequentially. The main driver of revenue growth was the group's average selling prices, which rose 8% from the third quarter and 5% year-over-year. The rise in ASP was attributed to a richer mix of products, which helped offset the weakness of the enterprise server market.

Discounted expectations
Intel shares are currently trading at over a 40% discount to the S&P 500's P/E of 16.9, indicating the market has little faith in Intel's growth prospects for the foreseeable future. Analysts expect Intel's earnings to decline by nearly 10% in 2013. Undoubtedly, Intel is a company that's undergoing a difficult transition from the PC glory days to a future that requires deeper roots in mobile computing. The company has over $18 billion of cash on its balance sheet, pays a 4.2% annual dividend, offering investors extreme value and protection for their patience. Over the long term, I still believe Intel shares are a worthy investment in 2013 because of their value relative to the company's improved competitive positioning in the next few years. The investment Intel is currently making into its 14-nanometer processes is expected to begin bearing fruit next year. In a few years' time, Intel's manufacturing leadership should help improve its positioning in our mobile-computing world, although investors shouldn't expect any miracles overnight.