For the longest time, Apple's (NASDAQ:AAPL) guidance was laughably low. Investors wouldn't be wrong to have simply ignored its outlook in the past, because the company always decimated its own guidance by astronomical margins. Those days are gone.

Perhaps Tim Cook wants to be more honest with investors, as the difference between actual results and guidance has declined significantly under his tenure. CFO Peter Oppenheimer made a very subtle semantic distinction with Apple's prior method of providing guidance and the new approach. The "new" Apple guidance is the real culprit behind its monstrous plunge today.

Sticks and stones may break my bones, but guidance was terrible

Oppenheimer repeated this line several times on the conference call when responding to an analyst seeking to understand the distinction with the new approach.

In the past we provided a single-point estimate of guidance that was conservative, that we had reasonable confidence in achieving. This quarter and going forward we're going to provide a range of guidance that we believe that we're likely to report within. No guarantee as forecasting is difficult, but we believe that we will report within that range.

Again, this becomes a semantic debate since Oppenheimer no longer describes future guidance as "conservative" as it was in the past. Taken at face value, investors are afraid that Apple will no longer actually beat its guidance and instead report "within" the provided range. That's why it actually matters that Apple guided revenue below Street expectations for the current quarter, whereas previously investors could have simply shrugged it off as another lowball forecast.

How bad could it be?
Apple is guiding revenue in the March quarter to $41 billion to $43 billion, short of the $45.4 billion that analysts were targeting. The midpoint of guidance represents 7% growth from a year ago, while analysts were hoping for 16% growth.

Apple declined to offer specific earnings per share guidance, so investors have to do a little legwork to calculate its bottom line outlook.

That translates into earnings per share guidance of approximately $9.18. That's a whopping 25% lower than the $11.6 billion in net income and $12.30 in EPS that Apple put up in the previous March quarter. Again, Apple's guidance fell short of the $11.67 EPS that the Street was modeling for.

One of the fears coming into the December quarter release was that Apple would put up negative earnings growth based on its guidance. The company was largely able to avoid that, and net income was actually a hair higher last quarter to reach a new all-time record, while EPS was down $0.06 due to share dilution.

It was the best of times
The biggest contributor to this predicted decline is gross margin. The midpoint of guidance calls for gross margin of 38%. However, the year-over-year gross margin comparison deserves some additional context. The previous March quarter saw Apple's highest gross margin ever, so any comparison is going to stack up unfavorably. 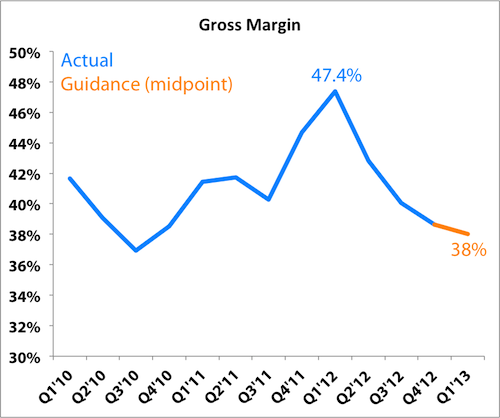 Not only is a 47% gross margin for a company with substantial hardware sales absolutely insane in the first place, but also arguably unsustainable. That being said, as Apple works its way down the cost curves of all of its newly redesigned products, gross margin should bottom out soon and rise again.

Whether or not it can ever achieve such a high level of gross profitability again remains to be seen, and it will also be a direct function of how frequently Apple decides to refresh its product cycles (which appear to be accelerating) and whether or not it moves downmarket with a lower-cost iPhone, among many other variables.

In absolute terms, it's not as if a 38% gross margin is bad by any measure, and plenty of other hardware-related companies remain envious.

In sickness and in health
If investors take guidance literally, then the outlook is disappointing relative to expectations. Now, more than ever, Apple's guidance is actually worth paying attention to, for better or for worse. Right now, that's worse.