Apple (NASDAQ:AAPL) investors tend to focus singularly on the iPhone, and for good reason, as the high-margin device remains the bulk of the business for now. Shares are down over 35% from all-time highs, largely on fears of saturation within the high-end smartphone market slowing down the iPhone's growth prospects.

Judging by how investors are currently valuing Apple, it's almost as if no one appreciates the iPad anymore.

Plenty to go around

Even as the iPhone business matures and growth decelerates, the iPad still has massive opportunities ahead of it, as the broader tablet market remains nascent. The only meaningful success that rivals have had thus far is in the low-end, most notably Amazon.com's Kindle Fire and Google's Nexus 7. Both of those devices sell at cost in order to further the e-tail giant's and search titan's goals of driving content sales and search traffic, respectively.

Microsoft (NASDAQ:MSFT) is jumping in with its Surface tablet, but as expected, it didn't report Surface unit sales when it released earnings last night. Surface RT is trying to compete with the iPad directly at the $499 price point, something no rival has done successfully to date.

Still, even if rivals begin to gain traction in market share, which is inevitable considering how much the tablet market is expected to grow over the years, Apple's potential is incredible.

The iPad alone will soon be bigger than all of Intel
Market researcher IDC recently boosted its forecasts on where the tablet market is heading, with worldwide shipments in 2013 expected to be 172.4 million, reaching 282.7 million by 2016. Apple is expected to grab half of those units and grow at a compound annual growth rate of 21%. IDC also expects Android to grab 40% of 2016 shipments, with Windows coming in No. 3 with 10% share that year. 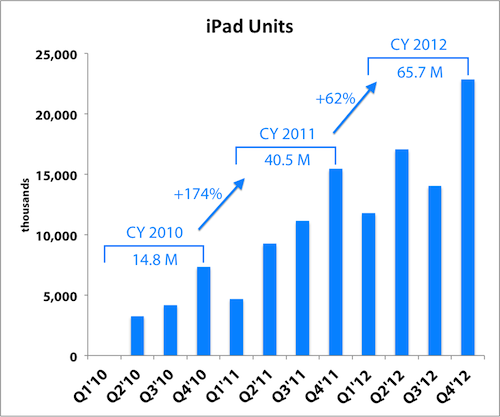 iPad average selling prices have declined from $582 in 2011 to $500 in 2012, in part due to the introduction of the iPad Mini and continued sales of the iPad 2 at the $399 price point. As consumer demand shifts toward the smaller form factor, ASPs will likely continue declining while unit shipments rise. iPad ASP in the most recent quarter was $467, but even if we use a conservative ASP of $400, we're still talking about $56.5 billion in iPad revenue in 2016.

That's more revenue than all of Apple generated in the fourth quarter and also more than many entire companies generate annually. That's more than the $48 billion in revenue that Amazon generated and $53 billion in sales that Intel (NASDAQ:INTC) cleared in 2012. Intel's 2013 guidance calls for low single-digit revenue gains, after posting a slight top-line decline in 2012. Assuming Intel only grows in low single-digits for a few years (a safe assumption considering the current state of the PC market), it's entirely conceivable that the iPad will actually overtake Intel in revenue in the near future.

The iPad alone is already bigger than Windows
With Microsoft reporting its latest figures last night, we can compare iPad revenue against its Windows division. The Windows business is one of Microsoft's three biggest segments, contributing over 40% of the quarter's operating income, and has been around for almost three decades. This is also the operating system that powers 92% of the world's PCs. 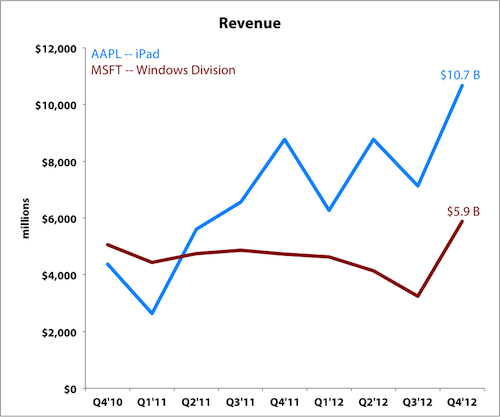 Diversify, diversify, diversify
The iPad will also help diversify Apple's business and reduce its reliance on the iPhone, although iPhone sales will always be critical. More importantly, the iPhone business is heavily reliant on carrier subsidies, which is a risk in itself, as wireless carriers stand between Apple and consumers.

The tablet market is an unsubsidized market where Apple sells directly to consumers. Even cellular-equipped iPads are sold unsubsidized with a la carte data packages, relegating carriers to commoditized service providers. This reduces the risk of possible subsidy reductions, since carriers have their own bottom lines to protect.

The ramp up to global tablet adoption will be long and profitable for Apple. Investors need to appreciate the iPad opportunity more.