Investors are none too happy with Apple's (NASDAQ:AAPL) latest earnings results. The gut-wrenching 12% sell-off is evidence enough of that. All of the pessimism, some of which is justified, surrounds iPhone results. While the company moved an all-time record of 47.8 million units, it was still shy of the 50 million that most were expecting.

It's entirely reasonable for investors to focus so intensely on the iPhone business, since that's been the primary revenue driver of the overall business for several years. Any shortfalls in that segment will inevitably lead to selling pressure.

It wasn't always this way. The iPhone hasn't always been the belle of Apple's revenue ball. More importantly, it won't always be in the future. Apple's primary revenue driver is destined to change again -- and that's the real inflection point investors are waiting for.

Wait a minute. Let's zoom out for a second.

Looking back, Apple's primary product driver has changed several times over the years, obviously starting with the Mac. As the iPod was launched and grew into a successful product family, it eclipsed the core Mac business as the biggest revenue generator. 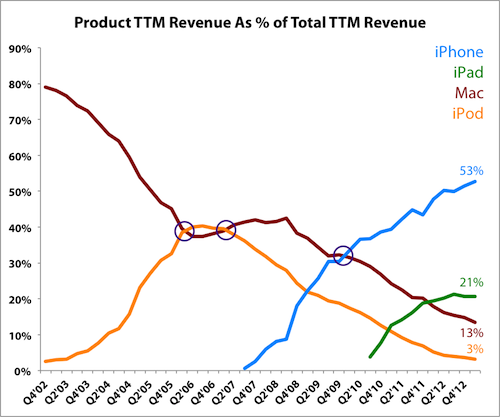 This transition took 18 quarters from the iPod's launch to when it became the biggest contributor to trailing-12-month sales, which occurred in fiscal Q2 2006 at 40% of TTM sales. This arrangement didn't last long, as the Mac retook the crown exactly one year later, likely due in part to the downward trend in iPod average selling prices as Apple introduced new models at lower price points.

The iPhone, on the other hand, took 11 quarters to become the big moneymaker, which still holds true to this day by a long shot, at over half of TTM sales.

Why ask why
There's no avoiding the fact that iPhone growth is currently decelerating, and as the biggest business, that's going to be a painful process. As far as why this is happening, there are numerous reasons.

Apple occupies (and dominates) the high-end smartphone niche, a market segment that may be reaching saturation as the first wave of smartphone adoption. Now that Apple has conquered the high-end market -- particularly within the U.S., where it enjoys a market share over 50% -- the company needs to turn its attention to lower-end and international markets.

That includes emerging markets and unsubsidized markets, where rivals have been able to gain traction with lower price points.

The iPhone may be maturing, but the iPad is still young.

They grow up so fast
It's worth noting that of Apple's three most successful product families, the iPad has seen the fastest adoption by far. This is a device category that OEMs left for dead a decade ago, and is now booming ever since the iPad resurrected it. 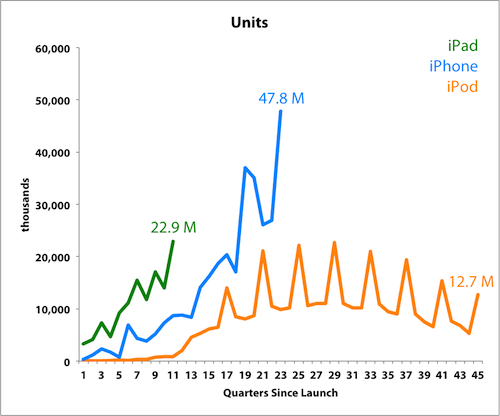 The iPad is now in its 11th quarter since launch, the same time frame it took the iPhone to become No. 1. However, the iPhone business has grown so fast that it's going to take longer for the iPad to catch up. The iPad business has already grown up to $32.9 billion in trailing-12-month sales. If it were a stand-alone company, that level of revenue would rank it No. 92 on the Fortune 500.

One day, the iPad will overtake the iPhone as Apple's primary revenue generator, driven by global tablet adoption. It won't be this year or next year, but it will happen.

What matters most
This is all before considering what else Apple may have up its sleeve. There's a good chance that the company will launch a low-cost iPhone this year aimed squarely at unsubsidized and emerging markets. Tim Cook continues to reiterate that Apple has an "intense interest" in the TV market, and some type of foray seems inevitable there.

If Apple makes these moves, it may take longer for the iPad to become Apple's business, but the iPad will eventually displace the iPhone as what investors care most about.