Gross margin is still within the normal historical range.

Apple (AAPL -1.96%) has seen its share price tumble since hitting a record high last September on the day that the iPhone 5 was released. There are two main reasons why the stock has come under pressure recently: concerns about falling gross margin, and rising competition.

However, Apple's gross margin is likely to stabilize around its recent level (just below 40%), and Apple remains the premiere brand for high-end consumer electronics devices. This strength will soon return Apple to solid earnings growth. Long-term investors need to see beyond day-to-day share price movements; from a long-term perspective, Apple's prospects remain bright.

Margins are correcting, not deteriorating
Investors were shocked during the company's October conference call when Apple CFO Peter Oppenheimer projected gross margin of 36% for the first quarter of the 2013 fiscal year. In the year-ago quarter, Apple had posted a 44.7% gross margin. Apple's management explained the drop primarily by pointing to the confluence of multiple product launches in September and October of 2012. Launch costs and low initial yields were to dilute gross margin.

Apple's October forecast was very conservative, as has been typical for the company in the past.  Still, when Apple reported results last week, gross margin was 38.6%, down 610 basis points year over year. However, while most analysts and investors have talked about Apple's gross margin deteriorating, it is more accurate to say that gross margin is correcting. The chart below shows that Apple's gross margin last quarter was well within the company's historical range. 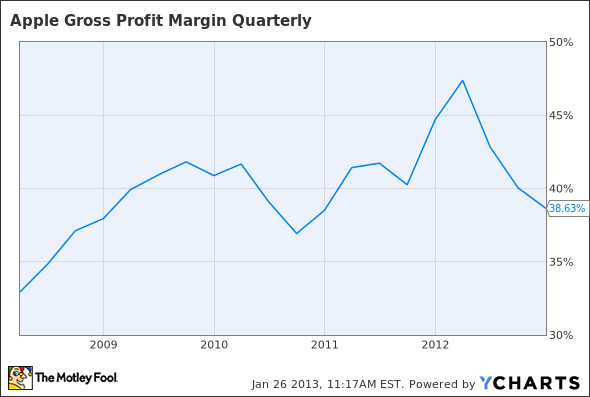 Last year's spike in gross margin to well above 40% was an aberration. Gross margin was boosted significantly by the launch of the iPhone 4S, which was very popular despite being quite similar to the iPhone 4. The iPhone 4S did not face the same launch costs as most new products because it retained the same form factor as the iPhone 4, which had been in production for 16 months. As a result, Apple's gross margin soared past previous highs.

Apple still rules the high-end
The other major concern among Apple investors is that competitors are gaining share in the smartphone market, where Apple generates the vast majority of its profits. Last September, Google (GOOGL -1.02%) announced that over 500 million Android devices had been activated since 2008, the vast majority of which were smartphones. In the same period of time, Apple sold roughly 250 million iPhones. Moreover, the gap appears to be growing. Samsung alone plans to ship 350 million smartphones this year, more than double the likely sales volume of Apple's iPhone lineup. Most of these will be Android devices, although Samsung is also launching a variety of models running Microsoft's Windows Phone 8 OS.

However, Samsung and other Android manufacturers are driving higher unit volumes by expanding into low-margin budget smartphones. Apple is not really interested in competing in that market segment. By contrast, in the high-end, where virtually all of the smartphone market's profit is earned, Apple is still king.

In its 2012 fiscal year alone, Apple sold 125 million iPhones. By contrast, while Samsung has scored hits with the Galaxy S series and (to a lesser extent) the Galaxy Note series, these two product lines have only sold 125 million units combined over their lifetimes. No other manufacturer comes even close to Apple's success in the high-end market. Former market leader Nokia shipped just 4.4 million Lumia Windows smartphones last quarter, whereas Apple shipped 47.8 million iPhones in the same period. Apple's high-end dominance is particularly obvious in the U.S. The prevalence of large smartphone subsidies here means that most smartphones sold are high-end models. In the critical U.S. market, Apple has recently been gaining share, passing 50% for the first time this fall.

Bigger may not be better
Many investors have become particularly concerned that the iPhone is too small compared to competing Android devices. Indeed, many Android phones have screen sizes of approximately 4.7 inches, and some so-called "phablets" like the Galaxy Note are more than 5 inches. By contrast, the iPhone 5 has a 4-inch screen, while all previous models have 3.5-inch screens.

Samsung's success indicates that many smartphone buyers want a larger screen than the iPhone currently offers. However, it would not be very difficult for Apple to address this market if the iPhone's smaller size becomes an impediment to sales.

Moreover, bigger is not always better. Many users prefer smaller phones, which tend to be more portable and easier to use with one hand. Verizon's management stated that slightly more than half of iPhone buyers last quarter chose the iPhone 4 or 4S (each of which has a 3.5-inch screen), rather than the iPhone 5. This suggests that among many iPhone buyers, having a large screen is not a priority.

No need to panic
While the past few months have been rough for Apple investors, panic selling is usually a bad investing strategy. Apple remains a strong company, and generated record cash flow last quarter. Apple's profit machine, the iPhone, is still the top seller in the high-end smartphone market. Furthermore, with Apple's gross margin having reset to a more normal level this year, future revenue growth should restart positive earnings momentum.