Even with Monday's triple-digit losses in the rearview mirror, the Dow Jones Industrial Average (DJINDICES:^DJI) has started 2013 with a bang. Investors couldn't be happier with the index's 3.5% year-to-date gain. It's quite a contrast with the doom-and-gloom talk surrounding many world economies these days, particularly with Europe still in a slump while Japan and China race to see which Asian economy can pump stimulus money the fastest.

With that said, however, just how is the Dow performing against the world's major indexes to start the year?

The Dow goes one-up on the world
Turns out the Dow's surge isn't just an American thing: Only Japan's Nikkei has managed to significantly outperform the Dow so far this year as new Japanese Prime Minister Shinzo Abe's inflationary goals and loose monetary policies fuel a Japanese renaissance in stocks. Meanwhile, the Dow's gains have easily bested the performance of many fellow indexes around the globe. 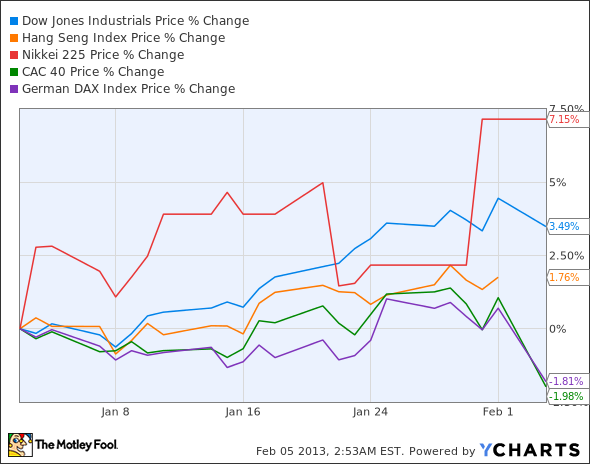 Hong Kong's Hang Seng Index has performed fairly well, all things considered -- particularly as China comes off of last year's infrastructure and GDP slump, which had many economists fearful of a downturn. Despite the economy's recent upturn, some Chinese stocks have dragged down the country's markets. China Petroleum and Chemical Corporation (NYSE:SNP), also known as Sinopec, hasn't helped. Sinopec's stock has been slashed 4.8% to start the year. With the company pledging to invest $4.8 billion to improve refiners in order to clean up pollution, Sinopec's own clean-up -- which wasn't helped by the company's announcement of a share-sale program totaling more than $3 billion -- could take some time.

Germany's DAX certainly isn't holding its own against the Dow. As Germany struggles to handle the ongoing fiscal crisis that has swamped Europe, the nation's stocks have taken a hit. Siemens (OTC:SIEGY), which is reportedly considering selling lower-growth businesses, has seen its shares fall 5.3% so far in 2013. Deutsche Bank, however, has managed to defy the drop and post gains of more than 10% to start the year despite the European financial fears and reports that Italian prosecutors have launched an investigation into the bank's practices.

Meanwhile, France really isn't carrying its weight, with the CAC-40 index suffering worse than its counterparts. In addition to the European crisis, France has struggled with internal squabbling over higher tax rates proposed by President Francois Hollande that could derail business operations within the country. Some French stocks have managed to stave off terrible losses, such as pharmaceutical firm Sanofi, which has strong global ties and is down just more than 1% this year. Others have suffered far worse: Steel firm ArcelorMittal (NYSE:MT) has seen shares fall an ugly 6.5% this year as the steel market remains down. And the uncertain future of China's infrastructure market has especially hurt the steel industry, whether companies are based in France or not.

Ultimately, however, the data shows us one thing: The Dow's off to a great start in 2013, and there are few markets that can boast this kind of success to kick off the year.