Earlier this morning, Sprint Nextel (NYSE:S) reported earnings, while posting the highest postpaid net additions on its Sprint platform since 2007. The third-largest domestic wireless carrier sold a total of 20 million smartphones throughout all of 2012.

Included in those figures are 2.2 million Apple (NASDAQ:AAPL) iPhones that were sold in the fourth quarter alone. These results complete the iPhone figures from the three largest carriers -- both AT&T (NYSE:T) and Verizon (NYSE:VZ) disclosed iPhone figures last month. Investors can now get a better picture of the domestic smartphone landscape, and Apple's dominance of it.

Sprint sold a total of 6.1 million smartphones, meaning that the iPhone represented just 36% of its total. That's lower than its rivals, but still a nice jump in absolute iPhone units for Sprint. Among the top three carriers, nearly two-thirds of all smartphones sold during the fourth quarter were iPhones.

One thing to keep in mind for Sprint is that it has committed to buying $15.5 billion worth of iPhones from Apple, whether it can sell them or not. The carrier has now had the device officially for five quarters. Based on Apple's consolidated iPhone average selling prices each quarter, and the activations that Sprint has reported thus far, the carrier may have already satisfied up to $5.5 billion of that commitment. 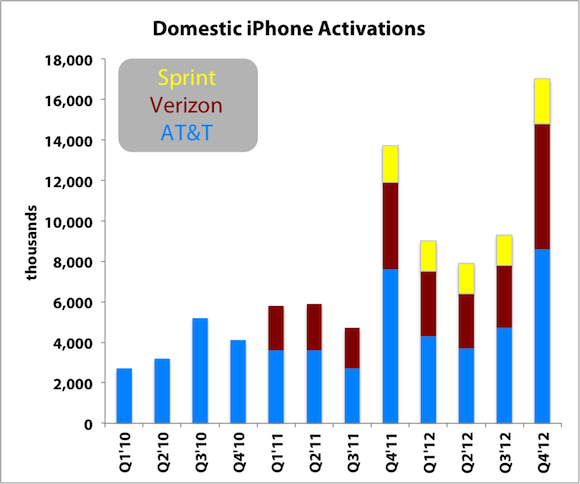 That would be 35% of its commitment in 31% of the timeframe, so it's slightly ahead of schedule. In absolute unit terms, Sprint has now sold a total of 8.5 million iPhones since it became an iPhone carrier.

Close enough
The activation figures that the carriers report don't exactly line up with Apple's actual domestic sales each quarter, a difference that I highlighted after Apple disclosed domestic data from its court battle with Samsung. The reason for this is that activation figures include new sales as well as possible activations of older models that have been sold or given to new users. In addition, Apple recognizes sales based on channel sell-in, so its inventory starting positions and other factors can contribute to the discrepancy.

There are also smaller carriers like Leap Wireless's (NASDAQ: LEAP) Cricket, and some other regional companies, but I assume that those sales are negligible rounding errors relative to the big carriers. In the two quarters since Leap got the iPhone, it has decided not to report actual unit data, so I don't think we're missing a lot there.

The good news is that, over the longterm, these factors tend to balance out and over the 16 quarters of domestic data that Apple directly provided, the average difference between activations and domestic unit sales was just 1%. That means that activations are generally a fairly good proxy for domestic sales in the long term, even if they're somewhat bumpy each quarter.

The bigger picture
That being said, if we look at AT&T, Verizon, and Sprint figures combined, we get a decent approximation for domestic iPhone sales, which, in turn, imply international unit sales. This metric has declined over the past several quarters after reaching as high as 74% in Q1 2012. 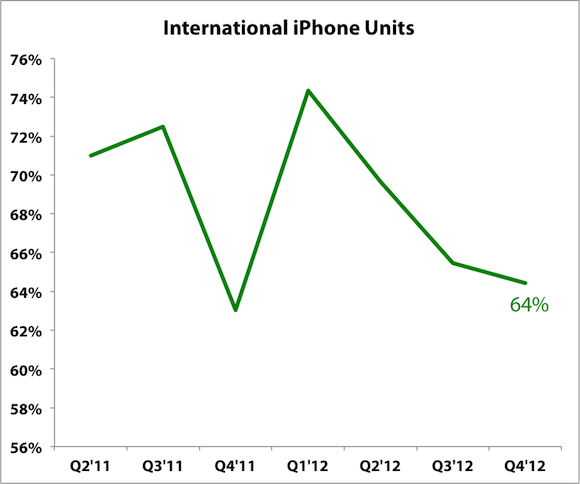 With most of the advances that rivals like Samsung are making in the smartphone market coming from abroad, these latest figures are just another sign that Apple needs to focus more on international iPhone growth.