When a stock's share price is lower than a North Dakota thermometer in February, investors tend to give it the cold shoulder. But as fortunes change and the market warms to a stock's prospects, its price can heat up in a hurry. Unfortunately, it's hard to tell that a stock is melting investors' hearts until after it's made that upward leap.

Taking the market's temperature
But using Motley Fool CAPS' proprietary ratings, aggregated from the opinions of the 180,000-member-driven investor community, can help us find previously low-rated companies that recently enjoyed a bump in investor confidence. We can see whether they're truly heating up -- or headed back to the deep freeze.

Business services giant R.R. Donnelley (NYSE:RRD) made it through Google's earnings announcement last month without incident, allowing investors to breathe a sigh of relief there would be no snafus. It was of course Donnelley's early release of Google's earnings announcement last October that sent shares of the search king plunging. Boy, make one mistake and you're tarred with it forever.

Caution: Contents may be hot
For a company that made its mark early on as a traditional business-printing services provider, publishing magazines, catalogs, retail inserts, books, and directories, Donnelley is actually the SEC's largest filing agent,  sending in 100,000 forms a year. As Donnelley's CEO noted in the aftermath of the Google brouhaha, you don't often hear about them performing the service because there's hardly ever an issue.

Its better-known printing business, however, is in the grips of a secular decline, losing ground to the digital distribution of content and online advertising. Although it may have signed up Office Depot last year to handle its catalog and direct mail services -- a deal it says is "a multiyear, multimillion-dollar agreement" -- Donnelley's future needs to be in electronic media.

Net sales in its U.S. print segment fell 6.4% last quarter, causing a 5% drop in net earnings excluding restructuring charges. Include them, though -- and I think an argument can be made in favor of these not being one-time charges since they've been taking them for years and years -- and profits fell 55% from 2011. The changing nature of its business has resulted in persistent overcapacity, price erosion, and the need to continuously redefine itself by shedding operations. 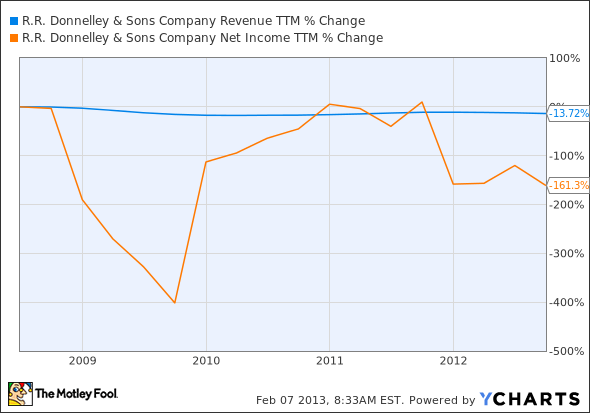 Donnelley's stock may have gained back some of the ground it lost in 2012, but it's been a long way down and shares remain almost 30% below their 52-week highs. So what does it have going for it that could warrant investor enthusiasm?

Book 'em, Danno!
In its favor, Donnelley is one of the industry giants, trailing only Dun & Bradstreet (NYSE:DNB) in terms of revenues, but because of its reliance on printing it hasn't weathered the storm as easily. D&B's revenues have grown at a compounded annual rate of 2% over the past five years compared to a 1.3% decline at Donnelley. It is, however trying to make a transition to electronic media. In 2011 it bought Journalism Online to help media companies generate subscription revenue from their websites, and last year it purchased Edgar Online, an electronic database of SEC forms, a nice adjunct to the filing business.

Donnelley also bought XPO International, a meaningful addition to its logistics services, but one that bulks up its ability to deliver letters and packages and moves it further into territory occupied by UPS and FedEx.

Where the digital realm hasn't yet had an impact is in its educational and specialty division, as physical textbooks are still the preferred choice. Not that the industry isn't struggling, though. The educational materials segment of schoolbook publisher Scholastic (NASDAQ:SCHL) has yet to regain its 2010 sales levels while revenues are only inching up at reference book publisher John Wiley & Sons (NYSE:JW-A), with sales growing just over 2% in 2012. Still, it will be hard for Donnelley to mount a meaningful turnaround by concentrating on publishing schoolbooks.

The weight of the world
One major concern is that Donnelley carries a lot of debt, born of the numerous acquisitions it's made. With a debt-to-equity ratio of 3.5, the business services specialist is well above the relatively negligible amounts carried by Scholastic or Thomson Reuters. It does generate sufficient positive free cash flow and management plans to use it to pay down debt, but investors who eye its juicy 11% dividend yield will want to know how safe the payout is if it can't gain traction.

Despite the stock trading at just five times earnings estimates, I have difficulty viewing the business services leader as cheap. The secular decline of its primary business lines suggests we'll continue to see weakening fundamentals despite making acquisitions to help transition to the digital age. I see it having further yet to fall before we see a true recovery taking form.