Apple (NASDAQ:AAPL) is cheap. It's a fact. Considering the massive 33% pullback that shares have seen over the past few months, combined with a rock-solid business, Apple's trading multiples have compressed further into value territory.

Earnings were relatively flat last quarter, but the company's P/E has still trended lower and is now just 10.66. 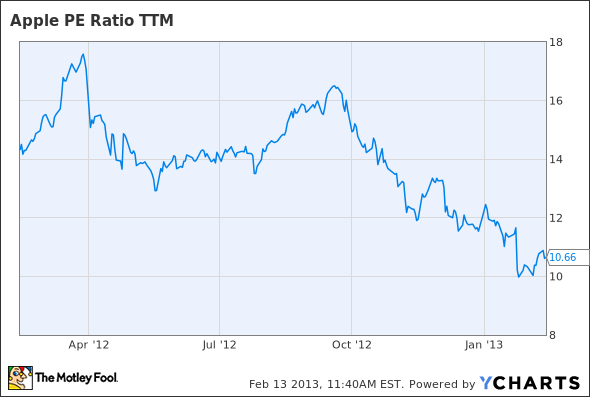 That's significantly cheaper than the S&P 500, and according to a recent Bloomberg report, we're talking about the biggest discount relative to the broader market in 12 years. By Bloomberg's estimates, Apple trades at a 29% discount to the S&P 500, a level not seen since December 2000.

At the same time, Apple has previously been proven to be disproportionately responsible for much of the market's earnings growth, highlighting how strange this discrepancy is. In fact, one technical analyst recently recommended a brave trade to capitalize on this divergence.

Oppenheimer's Carter Worth has recommended going long Apple while shorting the S&P 500 since the index has rallied significantly over the past few months while the Mac maker has gotten unjustifiably crushed. Worth believes the broader market has gotten ahead of itself and is set to pullback while Apple is due to bounce and head higher to approach $525.

That's still substantial upside from current prices and shows just how undervalued Apple has become in recent months -- so much so that investors are freerolling on numerous potential product introductions in the near future.

Will you take advantage of the biggest pricing discrepancy in Apple shares in a dozen years?