House of Cards is a risky title.

Netflix (NASDAQ:NFLX) bet $100 million on two seasons of original content, hoping that it would pay back in the form of more numerous and more faithful subscribers. And after that, we'll see a bunch of follow-on lottery tickets: a reboot of long-canceled cult hit Arrested Development, horror series Hemlock Grove, women's prison comedy Orange Is the New Black, and even a children's series about racing snails in cooperation with DreamWorks Animation.

So far, House of Cards seems to be off to a good start. The show opened to good reviews and high user ratings, Netflix says (without getting too specific) that people are watching it a lot, and even third-party sources like IMDb.com have confirmed that the show attracts plenty of eyeballs.

But what if it's nothing but a quick fling? What if House of Cards attracts a bunch of curious shad flies, happy to take a look for free but gone in a heartbeat? Maybe the Netflix model of dumping entire seasons on the audience all at once simply doesn't work. Perhaps all of these original content bets are doomed to come up snake eyes every time.

The risk
Some critics worry that Netflix stands to lose mightily if the premium series bets don't pay off. These are often the same pundits who expect the company's balance sheet to implode at any moment, and argue that every penny saved would be a penny earned here -- Netflix simply cannot afford to put any capital at risk.

I would advise these guys to calm down. The current slate of original shows is not very large in comparison to Netflix's total content budget, and the company has played this game before.

Longtime Netflix watchers might recall the Red Envelope Entertainment venture. This was an in-house production and distribution operation that Netflix ran for a couple of years, starting in 2006. It was meant to give independent filmmakers another publishing outlet while Netflix got exclusive access to some interesting films. In its short history, Red Envelope produced 12 movies and distributed another 36 films from other producers.

But that gamble didn't beat the house. CEO Reed Hastings explained it in a 2008 earnings call: "On Red Envelope, we did some experiments, tried to figure out an economic model that was scalable and sensible. Unable to do that, we decided to close it down and all the closure costs are baked into our current guidance."

You can't win 'em all. So Netflix cashed in its red chips, published a few more films to honor existing commitments, and walked away. Red Envelope is now a footnote in Netflix history, leaving a few dozen unique films in the Netflix library. They're all still there. I'm partial to Maggie Gyllenhaal vehicle Sherrybaby and indie comedy The Puffy Chair myself, and they were kind of a big deal back in 2006. Your mileage may vary. Either way, I doubt that anybody signs up just to watch these aging titles anymore.

The damage
But the failed bet didn't kill Netflix. It was a measured risk, no more than the financial platform could handle. Likewise, the House of Cards generation of fresh content is small enough that Netflix will survive a total failure -- or five.

Let's get back to a more recent comment from Hastings:

We're willing to try a little bit more riskier work than we've done with a little bit of our budget, and then we're going to see how it goes. ... I don't know if it's anything we'd bet the farm on, but we're certainly willing to try it with a small percent of the budget in House of Cards and then two or three other smaller ones that we would look for. And if we're successful with it, then we would expand our circle of confidence a little bit more, a little bit more. So we'll take it step-by-step and year-by-year.

If the production cost of House of Cards comes out to $50 million in 2013, and the somewhat lower-profile shows add up to maybe $100 million all in all, you've got $150 million of new risk on the table this year. The company spent $2.5 billion on streaming licenses last year, and expects to pony up just a bit more in 2013.

The worst-case scenario
So Netflix is risking maybe 6% of its content budget on original shows, for starters. And in the meantime, this is how the revenue and working capital situation has evolved since that old Red Envelope gamble: 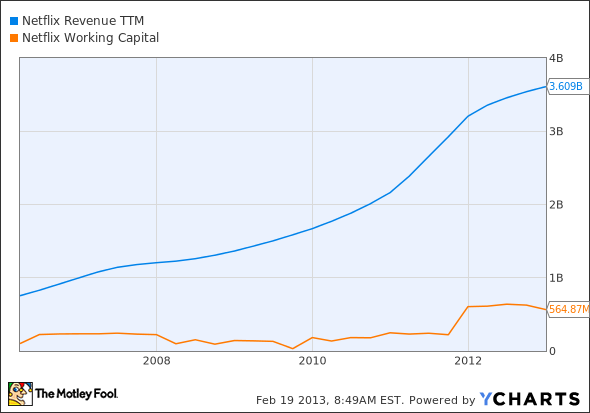 If this works out, that's great -- a solid reason for people to try the service and maybe stick around if they like it. There might be a few million long-term subscribers in it for Netflix on the upside. But if not, it's hardly an all-in bet. I'm not losing any sleep over the faint possibility that House of Cards comes tumbling down, followed by all of the other in-house series.

If worse comes to worst, Frank Underwood may never get his dream job. But Netflix will absolutely live to stream another day.

What if "House of Cards" Comes Tumbling Down? @themotleyfool #stocks $NFLX Next Article
Current