This morning the Department of Labor reported that the producer price index, a measure of inflation, rose a seasonally adjusted 0.2% in January. That's up from a 0.3% drop in December and lower than analyst expectations of a 0.4% jump. The biggest contributor was a 0.7% increase in the price of food, while energy prices fell 0.4%. Over the past 12 months, the PPI is up 1.4%. 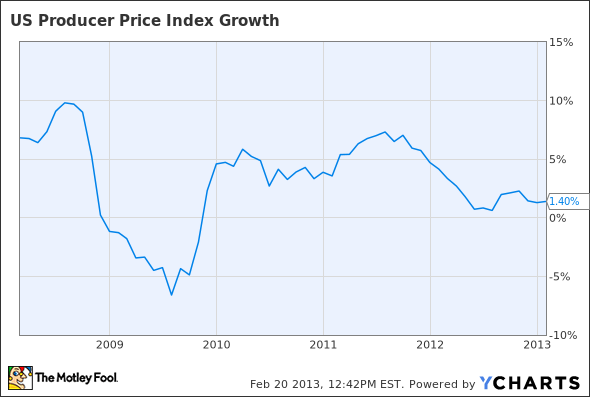 Core PPI, which excludes the volatile food and energy categories (because who uses those?), rose just 0.2%. That was in line with analyst expectations and above December's 0.1% growth.

Meanwhile, the Department of Commerce reported that new housing starts fell in January to a seasonally adjusted annual rate of 890,000. That's down sharply from December's rate of 973,000 and below analyst expectations of an annual rate of 914,000. It should be noted, however, that 890,000 is still a relatively high level versus the past few years. 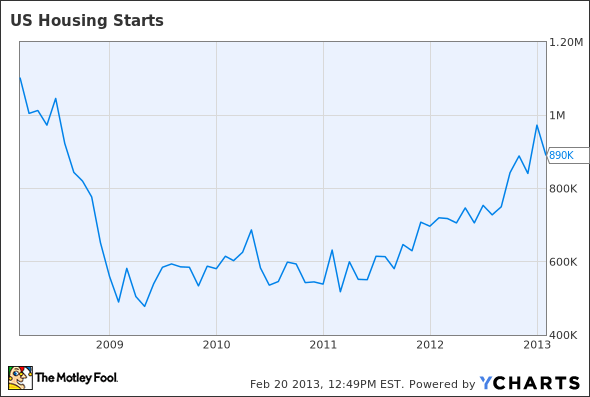 Today's Dow leader
Today's Dow leader is Boeing (NYSE:BA), up 1.4% to $75.69, slightly below its 52-week high of $78.02. 2013 has been rough for Boeing so far after its 787 Dreamliner was grounded by the Federal Aviation Administration over issues with the planes' lithium battery. While that issue is still not resolved, the company is making some headway. Last week the FAA cleared Boeing to begin test flights, and today Reuters is reporting that Boeing has found a way to fix its battery problems.

The company now has to deal with the results of a vote by one of its labor unions to strike instead of accepting a new contract. While Boeing's engineers accepted a new four-year contract, Boeing's technical workers, represented by SPEEA, did not, choosing instead to go on strike. The last time SPEEA went on strike in 2000, its 19,000 members went on strike for 40 days.