"In case you haven't seen a sales report these days, February [month-to-date] sales are a total disaster. The worst start to a month I have seen in my ~7 years with the company."

That's from a leaked internal email last week between Wal-Mart (NYSE:WMT) executives, according to Bloomberg.

This isn't good news. Two big headwinds right now are kicking consumers, particularly lower-income households that typify Wal-Mart's base: the expiration of the payroll tax cut, which raises taxes on an average middle-class family by about $1,000 a year, and the rise in gasoline prices, which have jumped 15% since December. If this hit to consumers' wallets is already feeding into Wal-Mart's sales, what will it do to the economy? The overall economy is already fairly weak. Add in a stiff headwind, and it doesn't look good.

That's the bearish view, anyway. I'd say there's a 60% chance of it being the right narrative -- austerity and higher gas prices are likely two of the biggest known threats to the economy right now.

But there is another view here. Wal-Mart is a peculiar company in that its selling point -- insanely low prices -- gains value when the economy is weak. Families who in normal times shop where it's most convenient flock to Wal-Mart when the economy sours. As the economy was falling apart in early 2009, CEO Mike Duke noted on a conference call: "Our company is stronger than ever because we deliver price leadership and value and help our customers save money so they can live better."

But that can go the other way. When the economy recovers, Wal-Mart sales might take a hit as consumers gain confidence and become less price-conscious.

That isn't just speculation. Emek Basker of the University of Missouri published a paper (link opens PDF file) in 2008 comparing Wal-Mart sales with those of Target (NYSE:TGT), which sells somewhat pricier, higher-quality goods. "I ﬁnd that Wal-Mart's revenues fall during good times whereas Target's rise during good times," Basker wrote. And guess what? As Brad Plumer of the Washington Post points out, Target's sales grew 3.1% in January.

One simple way to look at this is to compare Wal-Mart's same-store sales growth versus overall GDP growth: 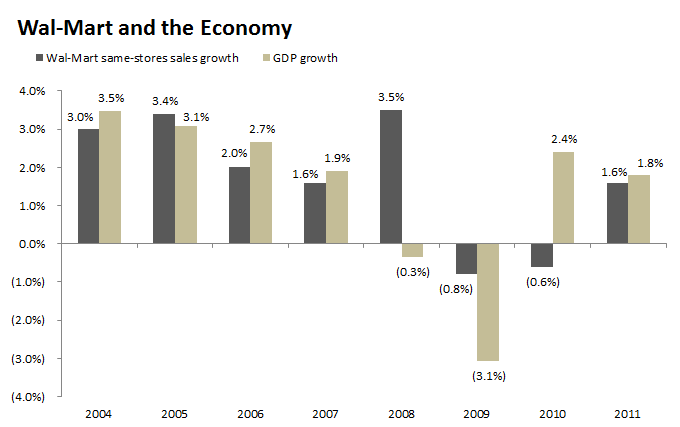 No one should be complacent. Tens of millions of consumers are in bad shape, and there are obvious headwinds that can compound quickly. But like everything else in the economy, things might be so much more complicated than they look at first glance.