I admit it's sometimes difficult to look too far down the road when the market continues to head higher regardless of the economic news. My investments have fared well as of late, and anyone who's been an optimist over the past four years is probably doing well, too. But the market doesn't have much regard for the past; it's all about what's in the future that often drives stocks. That's why I want to look at a sector that's poised for big gains over the next decade: the health care sector.

I understand there's plenty of animosity toward the sector because of high branded-drug prices and a long, drawn-out, drug development process, but there are five reasons why health care represents your best investment choice over the coming decade rather than traditionally strong sectors like technology or financials.

There is one primary reason why research costs are contributing to better drugs coming down our pipeline: Big technological advancements over the past decade.

Drug research all begins in the lab. According to the U.S. National Institutes of Health, there are more than 140,000 clinical studies currently under way. This figure has ballooned since 2000 as higher quality genome-sequencing equipment and better in-lab instrumentation has allowed researchers to conduct significantly more studies for the same previous cost. Source: ClinicalTrials.gov, a service of the U.S. National Institutes of Health.

As you can see, human genome sequencing costs have dropped through the floor, falling from north of $95 million in 2001 to less than $7,700 as recently as January 2012. The introduction of Life Technologies' Benchtop Ion Proton Sequencer should send these costs heading even lower. Note the correlation between these two charts as clinical studies soared when DNA costs began falling through the floor.

DNA sequencing is becoming increasingly important in cancer research, as sequencing tumors can lead to personalized therapy. Scientists at the Washington University School of Medicine in St. Louis, Mo., for instance, had fully sequenced 700 cancer patients' genomes, including healthy and cancerous cells, as of April last year, according to Science Daily. The lower cost of genome mapping and faster turnaround time will speed up the process of identifying mutations and could offer personalized cancer therapies in the not-so-distant future as opposed to a "one-size-fits-all" therapy.

Considering that health-care research budgets are only expanding, genome sequencing costs are falling, and that the sheer number of clinical studies being undertaken is rising, I can only assume that the next decade will see FDA approvals at a well-above-average rate than in the previous decade.

2. Follow the baby boomers
The 1990s and the first half of the 2000s was a generally good time for the financial sector as baby boomers earned a good living and had a lot of success investing their money. The train wreck that began in 2007 changed all of that, turning the financial sector into a veritable wasteland and hurting baby boomers more than any other generational class. With the first baby boomers (born 1946 to 1964) coming of retirement age in 2011, and roughly 10,000 boomers retiring each day from now through 2029, a boom in the health-care industry seems all but assured.

The Congressional Budget Office released a long-term budget forecast in June 2009 that projected that the cost of Medicare -- which is social health-care coverage offered to those age 65 and older, as well as younger people with disabilities -- would practically double from 3.5% of GDP in 2009 to 6.9% of GDP by 2035, about six years after the last group of boomers retires. Even more pressing, better treatments and healthier eating habits are greatly extending the lives of retirees beyond just the age of 65. Data from the Social Security Administration illustrates this point, with life expectancies beyond the age of 65 extending roughly seven or eight years for both males and females from 1940 through 2050. 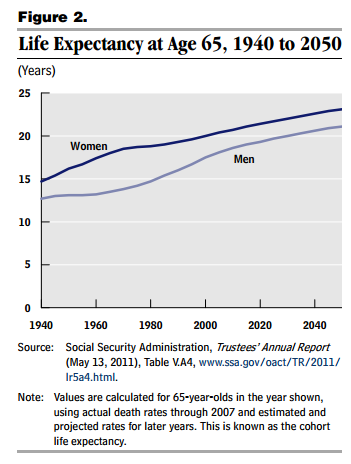 All facets of the health care sector appear likely to benefit from this trend of longer life -- from hospital and insurers, to pharmaceutical companies and medical device makers geared toward an aging population. One company that really stands out is Medtronic (NYSE:MDT). If we simply extrapolate out the fact that cardiovascular diseases are the leading cause of death in this country based on PhRMA's research, then a dramatic jump in those aged 65 and older should lead to a large boost in pacemakers, stents, and valve replacements -- all markets that Medtronic operates in. Another area of solid growth that should be spurred by boomers is spinal implants, an area where Medtronic is the head honcho.

3. Obamacare will streamline the health-care industry
Regardless of whether you support the Affordable Care Act, one thing is for certain: It will bring millions of uninsured Americans under the fold of government-sponsored Medicaid. As I noted, the baby boomers were one of the hardest-hit groups during the recession, so they may be one of the primary beneficiaries of the beginning of Obamacare in 2014.

Obamacare definitely has its share of critics, but it's expected to bring approximately 16 million newly insured Americans under the scope of government-sponsored health care. These are people who previously either avoided going to the doctor unless absolutely necessary or put holes in the pockets of hospitals because of their inability to pay their health care service costs. In addition, Obamacare mandates individuals to carry -- and businesses to provide -- health insurance or face potential tax penalties on a per-person basis.

Not surprisingly, no group of companies stands to benefit more from the streamlining of the health-care process more than hospitals. HCA Holdings (NYSE:HCA), the nation's largest hospital operator, can, as a result of Obamacare, expect its bad-debt provision to fall dramatically. This should ultimately free up funds that can be used in other aspects of its business -- including acquisitions, funding future hospital construction, purchasing new medical equipment, and perhaps even paying shareholders a dividend.

4. Little threat of drug or device commoditization
One of the biggest threats of the technology sector is that everything is slowly being commoditized. From memory to assembly line parts, many technical components can now be duplicated with ease, placing long-term downside pressure of many technology companies' margins. The same can't be said about the majority of health-care companies.

It's true that generic drugs are a form of drug commoditization in the health-care industry, and their presence does threaten to drive down branded-drug developers' margins. However, with the drug development process shortening, as well as the presumption that in-lab research costs will continue to fall, the amount of new drugs that could find their way to market over the next decade could dwarf the number of drugs set to fall off the patent cliff. This should negate a significant portion of the gross margin pain often associated with the introduction of generic medications.

The effects against commoditization are even more readily apparent in medical device makers. Intuitive Surgical (NASDAQ:ISRG), manufacturer of the da Vinci surgical system, offers the only commercially profitable surgical robotic system. Period! With few competitors on the horizon and an incredibly complex technology, I'd say its market share is safe for quite a long time. One of the greatest aspects of companies that can avoid industry commoditization is that they often boast huge margins. With few downside pressures other than its own research and development costs, Intuitive Surgical's gross margin has been a model of consistency since 2004.

5. International markets are largely untapped
You can actually make a strong point about emerging markets being a growth source for a multitude of industries, but few offer the growth potential that brand-name pharmaceuticals can bring to the table. Some of the most basic illnesses continue to go untreated in emerging-market countries around the globe and offer a jumping-off point for growth beyond just domestic markets.

One company that's taking the bull by the horns in expansion abroad is Merck (NYSE:MRK). Merck's annual report, filed earlier this month, demonstrates that it now generates 57% of its total revenue abroad. Burgeoning growth markets like India and China are where Merck's investment dollars are currently headed, with opportunities seen in cholesterol and diabetes medications, which are highly contested and largely saturated (no pun intended) in the United States.

Merck's fourth-quarter results continued to highlight this trend, with emerging-market growth up 9% and now accounting for 20% of total sales. Revenue generated from China soared 35%. This is notable as a report by research firm McKinsey & Co. that was noted by Bloomberg estimates that Chinese health care spending may nearly triple from now until 2020 and hit $1 trillion. If you head where the investment dollars are headed, you're likely to succeed.