In the past six months, Apple's (NASDAQ:AAPL) stock has fallen about 30%, numerous articles questioning Apple's direction have appeared, and hedge fund manager and investor David Einhorn filed a lawsuit against the company. But in 2012, Apple sold a boatload of phones and tablets, it generated gobs of money from its retail stores, and it grew its already huge pile of cash even bigger. Apple's stock may be slipping, but these numbers show the company's still moving in the right direction.

Shipping like there's no tomorrow
Earlier this week, Strategy Analytics released a report showing Apple took the No. 1 and No. 2 spot for most smartphone units shipped in Q4 2012. Samsung came in third place, arguably a distant third considering its Galaxy S III didn't topple the iPhone 5 or the iPhone 4S.

Here's how sales panned out for both companies the last quarter of 2012: 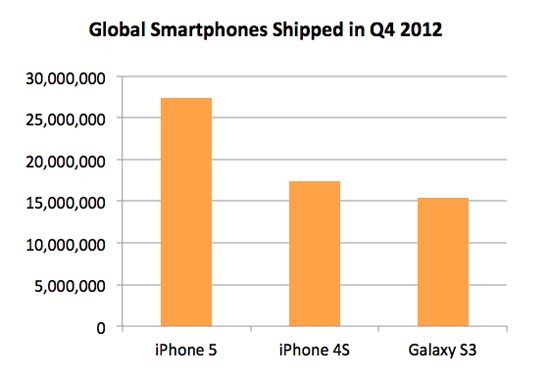 The Galaxy S III was the world's best-selling phone in Q3 of last year, but quickly lost that spot in the fourth quarter. Total iPhone shipments accounted for one in five of all global smartphones shipped in Q4 2012. With Samsung launching its new Galaxy S IV next month, it has a new chance to topple Apple's top spot (though Samsung will have to leapfrog two spots to accomplish that goal).

Snatching up tech revenue
When it comes to tech revenue, Apple and Samsung continue to battle it out -- but Apple has the upper hand. NPD Group released a report a few weeks ago showing U.S. tech consumers prefer to spend their money on tablets and smartphones with an apple on the back. 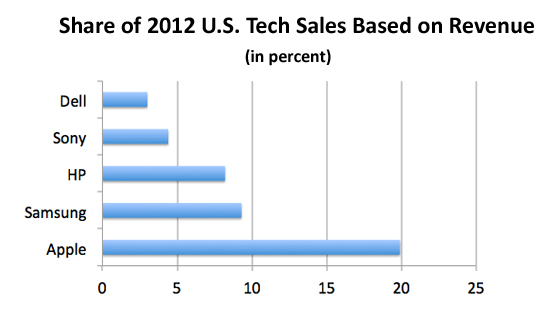 Stores galore
Aside from Apple's strong sales and digital presence, the company also dominates the physical retail tech space. Apple has about 400 stores worldwide, with 250 in the U.S. alone, and it's opening up 30 morethis year. Store numbers obviously aren't sales, but in the case of Apple, they translate into sales pretty well. In Q1 2013, Apple stores brought in $6.4 billion in revenue, with $1.6 billion in profit. Apple also saw 120 million people in its stores this quarter and about 370 million people visited them in 2012.

Apple leaves the competition far behind when it comes to its store numbers, so a graph is hardly fair, but it helps to see the comparison. 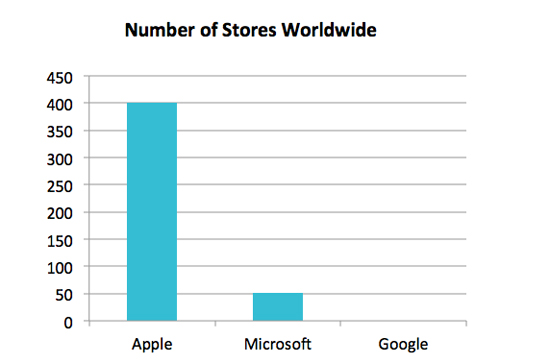 Sources: Apple and Microsoft. Google Chrome Zone stores not counted because they only showcase products and don't sell them.

According to Retail Sails, Apple makes $6,050 for each square foot of floor space in its stores. Maybe that's why Microsoft is currently making a retail push with more locations opening up. Rumors are also flying that Google will open its own retail stores soon. Google experimented with Chrome Zone stores inside other retail and public locations recently, but didn't sell products directly through the stores.

Stacks and stacks
Perhaps the most impressive of all of Apple's figures is its enormous pile of cash. The company has $137 billion in its coffers right now, and $47 billion in free cash flow has come in the past year alone. Apple's cash figure can be hard number to visualize, so let's look at a chart to compare Apple's current cash amount with PC-maker HP's revenue from 2012.

Talking about Apple's cash pile last month, CEO Tim Cook said at the Goldman Sachs Technology and Internet Conference, "[C]ash is not burning a hole in our pocket." Some Apple investors wish it would, though. Hedge fund manager David Einhorn filed a lawsuit against Apple earlier this month over what he says is the company's decision to eliminate preferred stock.

Can the numbers keep going up?
Although Apple's dominated the tech industry, many are wondering whether the company's best days are behind it. The mobile space is highly competitive and Apple can't afford to bask in its past achievements. Worldwide mobile device sales are growing, something Apple is particularly strong in, but some investors are concerned that Apple's product price points won't adapt to emerging market needs -- specifically, a cheaper iPhone. A low-cost (or at least cheaper) iPhone is only part of the equation for Apple going forward, though. Many are waiting for Apple to announce new products, like an Apple TV, to prove that the company can still introduce products that disrupt industries.

Judging by the numbers, Apple is still doing pretty well for itself, despite the lower stock price. Investors should continue to look for new product releases from the company and how it handles itself concerning emerging markets. It's obvious that Apple knows how to create and sell products that consumers want, and there's little evidence to indicate the company won't continue down that path.