Beware the momentum stock when it stalls out. 3D Systems (NYSE:DDD) fell by double digits today (but has since recovered from much of that drop) after reporting earnings. Here are the four most important numbers you need from the 3-D printing leader's earnings report:

That's a 24%-37% revenue growth rate for next year, and, at best, an 8% decrease in adjusted earnings per share. Since this guidance bakes in the three-for-two stock split, the effective pre-split EPS range is $1.50-$1.73, which works out to a 38% growth rate on the high end.

Why isn't that good enough?

3D Systems just posted 54% growth on revenue and 54% growth on earnings per share for 2012 over its 2011 annual results. The rocket might finally, slowly, be running out of fuel. I don't want to say that I told you so, but I did tell you that this was a distinct possibility last November. Now that the drop is here, the big question is: How far will it go? Is this just the start, or is it a one-day overreaction? Digging into some more nuanced numbers might help, so let's get to that now.

What the numbers tell you
Before we get started, let's first take a look at how 3D Systems' quarterly GAAP results look in terms of its recent earnings history: 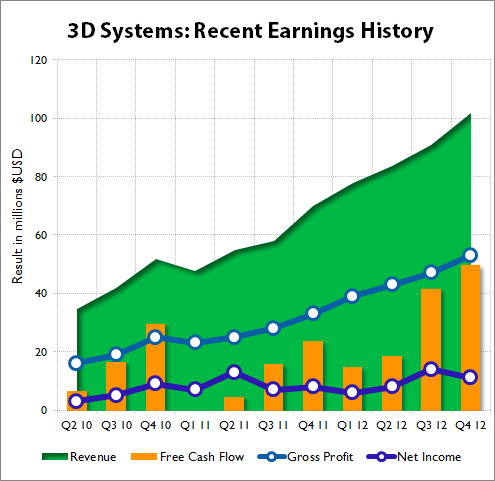 This is generally positive momentum, except for a dip in net income. After the drop, 3D Systems' market cap is roughly $3.2 billion, which gives it an 82 P/E based on the past four quarters of GAAP net income. That's slightly better than where it was earlier, but by any measures it's still an exceedingly high valuation for a company that anticipates slowing growth, even if it's slowing to a level most companies would kill for.

Free cash flow looks better now than it ever has before (the most recent result is in fact the annual result, and is not just for the fourth quarter), and a 64 price-to-free-cash-flow ratio is slightly more palatable. However, inventory levels have grown markedly:

This isn't yet a major cause for concern, but it's certainly something to keep an eye on for the future.

A big reason for 3D Systems' drop today was that its fourth-quarter revenue of $101.6 million came in below the $103.9 million Wall Street was expecting. Adjusted EPS did beat the Street, $0.39 against $0.26. The company's full-year results were very slightly ahead of expectations, beating revenue estimates by $600,000 and EPS estimates by $0.02.

Looking forward, however, 3D Systems' 2013 guidance comes in ahead of the $442 million in revenue Wall Street is seeking, and if we use pre-split EPS estimates, the company's high-end guidance also comes in well ahead of the Street's consensus of $1.58.

One very important thing to consider is organic growth. The word "acquisition" shows up over 300 times in 3D Systems' 10-K, and the company mentions that it completed nine acquisitions in the 2012 fiscal year, as well as two in early 2013. That brings to 33 the number of companies 3D Systems has acquired in the last three years. This was a major reason why I did not think that 3D Systems' growth could continue when I debated its merits last November, and the breakdown in organic growth compared to new growth is striking:

With fewer companies to buy, 3D Systems' growth is set to slow. The company is already warning of this with growth rates that fall below 2012's, and through a lower level of fourth-quarter growth against the rest of the year, after most acquisitions had already been completed.

Foolish final thoughts
The reason you buy a stock with a triple-digit, or nearly triple-digit, P/E is that you expect it to continue growing at extraordinary rates, provided cash flows aren't drastically out of line with earnings. There simply aren't that many other 3-D printing companies or ideally positioned complementary businesses left for 3D Systems to buy, especially not at the bite-sized scale that the company's preferred.

The current year's growth rate projections look to be largely organic in nature, which is better than what we've seen before, but not as impressive as the aggregate growth rates of the past year. Is this highly valued stock still worth its nearly triple-digit P/E in light of these lowered expectations? That's going to be the biggest question for investors who want to ride this rocket all the way to the moon. The last thing you want is to run out of fuel halfway up.