Last Thursday, upscale department store operator Nordstrom (NYSE:JWN) reported EPS of $1.40, which beat analyst estimates. For three years in a row, Nordstrom has delivered double-digit growth in sales and EPS, with same-store sales up by at least 7% each year. This run of consistently strong performance has helped Nordstrom's stock bounce back from its lows below $10 during the 2008-2009 financial crisis. 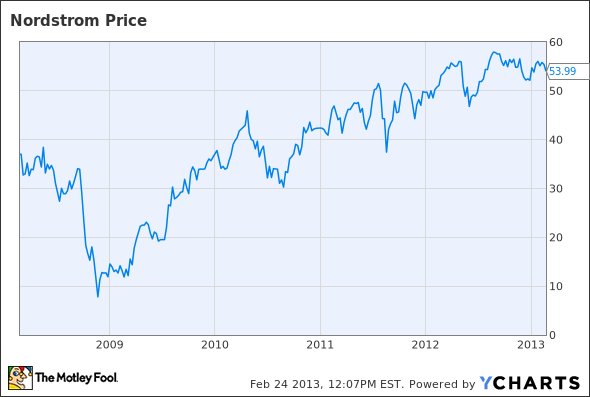 However, Nordstrom's management gave a somewhat subdued outlook for 2013. Same-store sales growth is projected to slow to a range of 3.5% to 5.5%, with total sales up 4.5% to 6.5%, primarily as a result of new Nordstrom Rack store openings, offset by the return to a 52-week fiscal year (the 2012 fiscal year had 53 weeks). EPS of $3.65 to $3.80 is projected to be just slightly higher than 2012's EPS of $3.56. While this is hardly a disastrous forecast, the company's recent performance suggests that management may be taking a conservative approach to guidance. There is a very good chance that Nordstrom will be able to maintain its strong sales momentum and meet or exceed the high end of the guidance range.

Growth initiatives
On the earnings conference call last week, CEO Blake Nordstrom outlined a growth strategy centered around heavy investments in online sales and Nordstrom Rack, along with incremental expansion of the Nordstrom full-line stores. This strategy rightly focuses on the highest-potential areas. In 2012, online sales grew by 37%, while same-store sales grew by 7.4% at Nordstrom Rack. Nordstrom opened 15 new Nordstrom Rack stores last year, boosting total sales in the Rack division by 20%. By contrast, full-line stores saw a low-single-digit increase for the full year, culminating in a 2.2% increase last quarter, with no new store openings.

The pace of sales increases in the online and Rack divisions is tipping the sales balance toward those higher growth areas, which ought to improve sales growth going forward. In fact, Nordstrom plans to double the number of Nordstrom Rack locations over the next four years, by which point nearly 50% of total company revenue could come from direct (online) sales and Nordstrom Rack.

Upside factors
For 2013, Nordstrom's management is projecting low-single-digit same-store sales growth in the full-line and Rack stores, and over 20% growth in online sales. Full-line stores are thus expected to deliver sales growth similar to last year's, but growth is expected to slow dramatically at Nordstrom Rack and online.

The maturing of the online business, which reached $1.3 billion last year, will eventually lead to slower growth rates, just because maintaining the same percentage growth rate requires adding more revenue as the revenue base grows. That said, online revenue growth actually accelerated last year, from around 30% in 2011 to 37% in 2012. With this level of momentum, 20% growth seems like a very conservative target.

The Nordstrom Rack growth projections also seem conservative. Management has stated that it usually takes three years for a new location to mature, and Nordstrom has added 50 Nordstrom Racks in the past three years. Having so many newer "maturing" locations boosts the overall same-store sales performance of the Rack division. Moreover, the company is removing some cash registers from Nordstrom Rack stores (to be replaced with mobile checkout devices for associates), which will create additional selling space and should help sales. These factors could boost Nordstrom Rack's same-store sales performance to the mid-to-high single digits.

Downside factors
While there are plenty of reasons to believe that Nordstrom can outperform its guidance, investors should remember that broader economic weakness could drag down growth. Consumer confidence readings have dropped since late last year. While lower-end retailers are bearing the brunt of this weakness, luxury retailers may also be affected this year. Most notably, wealthy Americans are facing a higher tax rate and caps on itemized deductions as a result of legislation passed in early January. Sharp cuts in government spending set to go into effect beginning in March will further slow economic growth and cut into consumer spending.

Moreover, Nordstrom has been outperforming competitors, which may not be sustainable. Saks (NYSE: SKS), which is Nordstrom's closest competitor among publicly traded companies, posted 4.3% same-store sales growth through October. (Saks will report its fourth-quarter sales and earnings results this week.) Macy's (NYSE:M) reported a similar same-store sales growth rate of 3.7% for fiscal year 2012. Macy's, like Nordstrom, has been one of the strongest-performing retail stocks over the past few years, and slowing sales growth there could be a leading indicator for future sales trends at Nordstrom.

Foolish bottom line
While there are factors pulling in each direction, on balance I think that Nordstrom has lowballed its 2013 forecast. The company is projecting noticeable slowdowns in the growth rates of Nordstrom Rack and the online business. Economic weakness and a "reversion to the mean" relative to competitors will most likely prevent Nordstrom from delivering a fourth year of 7% same-store sales growth, but there is definitely upside to the company's forecast. In light of Nordstrom's solid trajectory, the company is definitely worth a second look for growth and value investors alike.