First up, the Department of Labor reported that weekly new unemployment claims fell by 22,000 to 344,000. That's far better than analyst expectations of 362,000. The less volatile four-week moving average fell 6,750 to 355,000. New unemployment claims can be affected by numerous factors, so economists generally follow the four-week moving average. 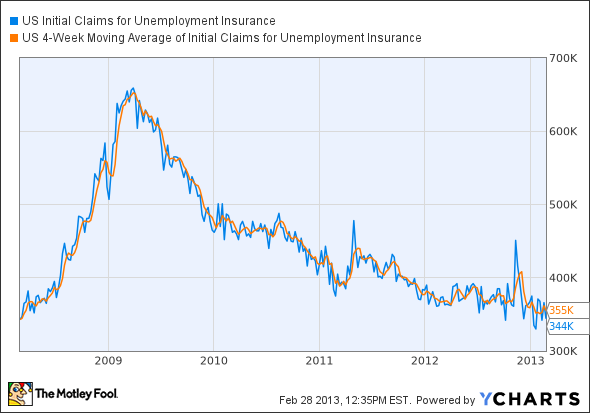 Next, the Department of Commerce came out with its revised fourth-quarter GDP numbers. GDP growth was revised to 0.1% growth, while the initial report showed a 0.1% decline. That's still below analyst expectations of 0.5% growth and is the lowest growth in nearly four years. Q4 GDP was supported by consumers who increased their spending by 2% in the fourth quarter, but big drops in defense spending and inventory spending slowed the economy. 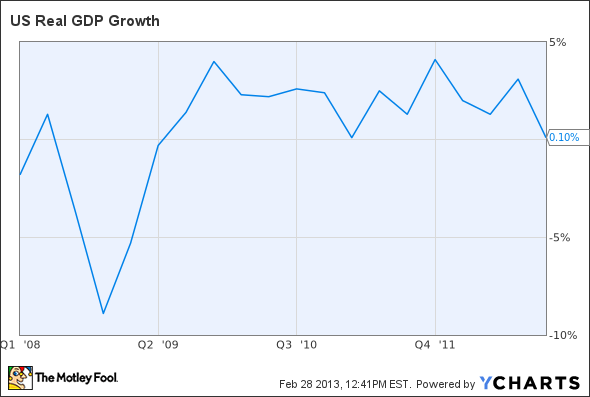 Going forward, GDP growth is expected to be slow as consumers deal with higher taxes on income and payrolls. Gasoline prices are also at a high level for this time of year, further weighing on consumers. Of course, the economy will also have to deal with slightly decreased government spending if Congress does nothing about the sequester.

Today's Dow leader
Today's Dow leader is Hewlett-Packard (NYSE:HPQ), up 2% to $20.17. Hewlett-Packard has been on a tear for the past week, rising a little more than 17% since last Thursday. The company reported earnings last Thursday that, while down, were better than expected, pushing the company's shares up. This week the good news continued, with HP announcing it had sold its webOS operating system to LG Electronics, which the company acquired when it bought Palm in 2010. Yesterday the company jumped 4% after announcing it would develop tablets using Google's Android operating system.