A backlash against Google's (NASDAQ:GOOGL) as-yet-to-be-released Google Glass has already started. The 5 Point Cafe, a watering hole in Seattle (as tech-savvy a city there is, no less), has instituted a ban on patrons wearing the revolutionary piece of technology in the establishment. 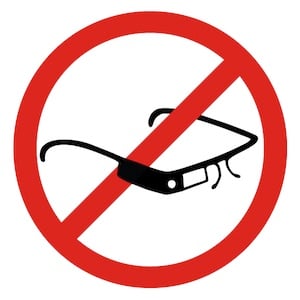 The bar, with the motto, "Alcoholics serving alcoholics since 1929," has posted this dictum on its home page:

If you're one of the few who are planning on going out and spending your savings on Google Glasses -- what will for sure be a new fad for the fanny-pack wearing never removing your bluetooth headset wearing crowd -- plan on removing them before you enter The 5 Point. The 5 Point is officially a No Google Glass zone.

And on its Facebook page, The 5 Point Cafe warned of punishment for "violators."

Bar owner David Meinert told Jamie Griswold of MYNorthwest.com it's all about privacy.

"The 5 Point ... is a sometimes seedy, maybe notorious place and I think people want to go there and be not known. Part of this is a joke ... but part of it is serious because we don't let people film other people or take photos unwanted of other people in the bar because it's kind of a private place people go," Meinert said.

Okay, I get why surreptitious video-taking would be anathema to those seeking the darkened confines of a "what happens in this joint stays in this joint" kind of place. I can also understand the experience of sitting next to a Google Glass wearer constantly issuing voice commands could wear thin quickly.

But the reality is that high-quality still and video cameras are now on just about every smartphone out there. And there's another piece of wearable computer wizardry on the way from that bastion of high tech hip -- Apple (NASDAQ:AAPL).

Will The 5 Point Cafe also issue a ban on the still-in-development "iWatch"? Bloomberg has reported 100 Apple product designers working on a wrist-wearable device that will perform iPhone and iPad tasks, according to unnamed people with knowledge of Apple's plans.

The 5 Point Cafe's banishment of Google Glass may not just be an outlying response to what more than just denizens of a self-described shadowy bar could see as an invasion of privacy. Here are two cases in point.

Joshua Topolsky wrote in his Verge column last month of his experience wearing Google Glass. Google let him review a pair and he and his film crew went to a Starbucks. The film crew was asked to stop filming but Topolsky "kept the Glass' video recorder going, all the way through my order and getting my coffee. ... The cashier seemed to be on the verge of asking me what I was wearing on my face, but the question never came. He certainly never asked me to stop filming."

Then, as reported by The Guardian, there was a Luddite-like tweet recently from David Yee, the chief technology officer of the how-to-write-better website Editorially. That lament: "There's a young man wearing Google Glasses at this restaurant, which, until just now, used to be my favourite spot."

Users of Google products, like Gmail, likely don't hold the company any more to the highest standards of privacy. I, for one, get a queasy feeling every time I get advertisements in my Gmail's sidebar triggered by the mail's content.

David Meinert told me via a Facebook exchange that The 5 Point already has a policy that doesn't allow taking photos or videotaping, but he will reserve judgement on an iWatch depending on that device's capabilities.

He also wrote that after posting the Google Glass ban on Facebook, he had the busiest Sunday in a while. "Not sure it was because of all the unexpected publicity ... but we definitely haven't slowed down."