There were two economic releases this morning.

The one to pay attention to is the Department of Labor's job openings report, which showed that job openings edged up in January by 80,000. Hiring and turnover were unchanged from December at respective rates of 3.1% and 3%. The jobs market is a key factor for the U.S. economy, and it has been holding back the domestic recovery as the unemployment rate stays high. Rising job openings show a healthier economy as companies look for more employees. 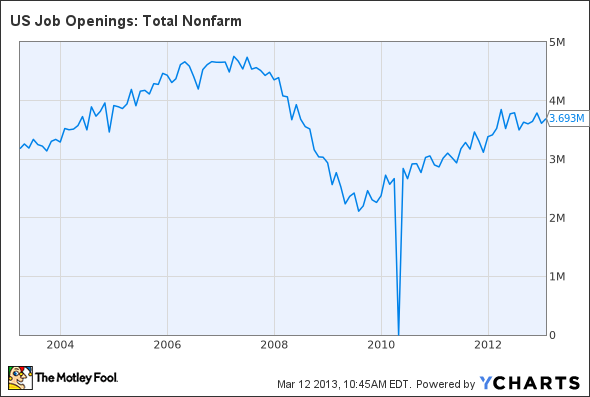 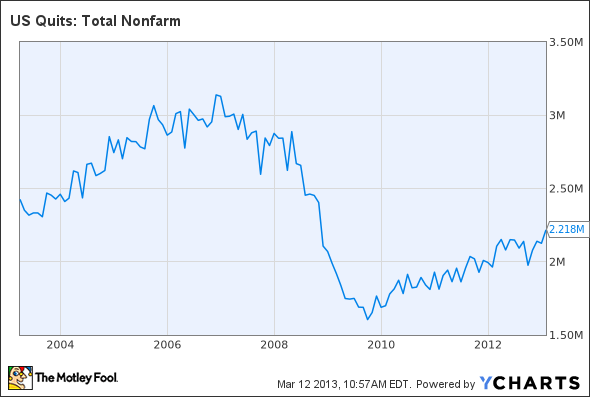 Today's Dow leader
Today's Dow leader is Merck (NYSE:MRK), up 3.3%. Earlier today, a medical advisory panel said a large trial for Vytorin can continue. Vytorin is a cholesterol-limiting drug that, along with Zetia, provided the first real competition for Pfizer's Lipitor. The trial includes 18,000 participants, was started in 2005, and is scheduled to end in September 2014.

Merck is trying to show conclusively that Vytorin is significantly more effective than Zocor, another Merck drug that is now available in generic form. Vytorin currently has sales of about $1.75 billion per year, down from 2008, when two smaller studies raised doubts over Vytorin. The first study showed that Vytorin led to an increased risk of cancer, while the second study showed that Vytorin was no more effective than generic Zocor. The continuation of the study is good news for Merck, as it shows that the panel believes the study has a good chance at a positive result. A successful Vytorin trial would be a boon for Merck going forward, but we won't know the result until next September.