As I noted two weeks ago, cancer statistics are both staggering and disappointing. Although cancer deaths per 100,000 people have been on the downswing since 1991 thanks to access to more effective medications and better awareness about the negative health effects of smoking, there is still a lot of research and progress yet to achieve. My focus in this 12-week series is to bring to light both the need for continued research in these fields, as well as highlight ways you can profit from the biggest current and upcoming players in each field.

The skinny on breast cancer

Closely following prostate cancer is breast cancer, which is forecast to be diagnosed in nearly 235,000 people in 2013 -- including more than 2,200 men! However, make no mistake about it, excluding for skin cancers, breast cancer is the most common cancer diagnosis that a woman is likely to receive. 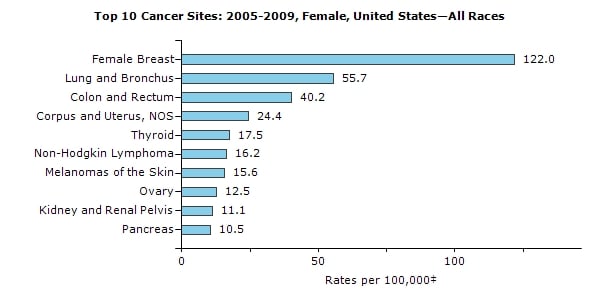 Like we saw with prostate cancer, five-year survival rates have been steadily rising for female breast cancer suffers. In 1975-1977, five-year survival rates were 75%, but have since improved to approximately 90% as 2002-2008 according to the American Cancer Society (link opens PDF). Part of this improvement can be attributed to better public awareness with regard to earlier detection, while other aspects, including better treatment options and a reduction in the use menopausal hormone therapy, which was discovered to contribute to cancer-causing risk, have played their part.

The treatment options for those with breast cancer will vary based on the stage of the disease, but most often involves either breast-conserving surgery or mastectomy (removal of the entire breast). Numerous studies have shown that breast-conserving surgery when combined with radiation compares just as favorably as a mastectomy in terms of long-term survival, but again, each case will vary. Additional treatments may include chemotherapy, hormone therapy, or radiation therapy.

By far, the most common treatment pathway in early stage breast cancer is through hormonal therapy (assuming the tumor is hormone-receptor positive). This occurs by reducing estrogen production through the use of aromatase inhibitors or blocking the effects of estrogen on cancerous cells with selective estrogen receptor modulators, or SERMs. With a definitive link between estrogen production and cancer cell growth, these treatments revolve specifically around estrogen reduction or suppression.

All told, it's quite common for early stage breast cancer suffers to be prescribed either Nolvadex or some combination of an aromatase inhibitor and a SERM.

As you might have guessed, there's also quite a bit of research and money going on into late-stage/metastatic breast cancer. Let's have a look at some of the most common advanced-stage treatments.

However, not every drug vying for approval in breast cancer has received the green light from the FDA -- not even the incredibly dominant Roche. In 2011, Roche's Avastin, which had been approved by the FDA under an accelerated review basis to treat breast cancer in 2008, had its approval revoked. The FDA ruled that Avastin's survival benefits in breast cancer were minimal compared to its potential serious side effects including high blood pressure and hemorrhaging.

What's coming down the pipeline
Now that you have a better feel for what the current standard of treatment looks like for the early and late stages of breast cancer, let's take a look at some of the upcoming treatments that could revolutionize breast cancer treatment.

Your best investment
If you haven't figured it out by now, Roche is clearly the company to own if you want breast cancer treatment exposure! Roche is finding meaningful new ways to extend the patent life of its blockbuster Herceptin through combination therapies and has an array of cancer combatants that work via different pathways which gives it the upper hand when it comes to finding new combination partners.

If you're willing to take a bit more risk, I happen to think ImmunoGen will offer the best risk-reward ratio. Although it'll only see somewhere in the 3% to 5% range with regard to royalties on sales of Kadcyla, it's all about flaunting its TAP technology. Geared as a combination therapy, it won't take long for ImmunoGen's technology to start being combined with blockbuster FDA-approved drugs to increase PFS and median overall survivals for multiple types of cancers -- including breast cancer.

Stay tuned next week when we tackle the current and upcoming therapies for the treatment of lung cancer in this Tackling Cancer series.