The wealth-building power of compound interest will never cease to amaze me.

It's a story of patience and attention to detail, where small, short-term differences add up to massive divergence over decades. And in the end, the biggest winners don't always deliver the fattest share-price returns.

Sometimes, it's not even about having the most generous dividend policy. Let's call in IBM (NYSE:IBM) to show you what I mean.

Big Blue has totally crushed its peers on the Dow Jones Industrial Average (DJINDICES:^DJI) over the last two decades. Over this time, the stock price has soared by 1,580% while the Dow eked out an 83% gain. Throw in dividend reinvestments along the way and the Dow jumps to a 152% gain. IBM's total returns balloon to 2,59%. 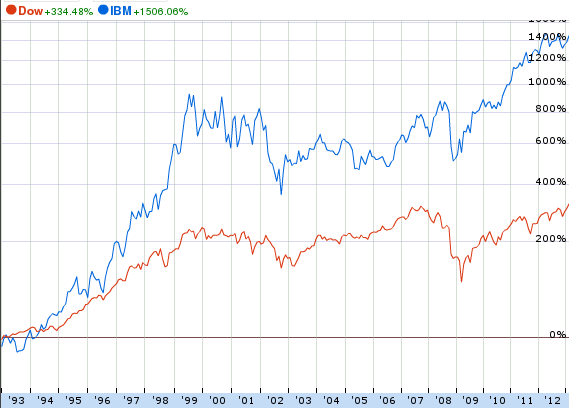 Dividend checks over this period added up to $31 billion, which would have been enough to buy the entire company twice in 1993. That alone would be more than enough to beat the Dow's average returns, even if share prices had stayed flat throughout.

That being said, dividends actually play a rather small part in IBM's efforts to return cash to shareholders. Prepare to be amazed. 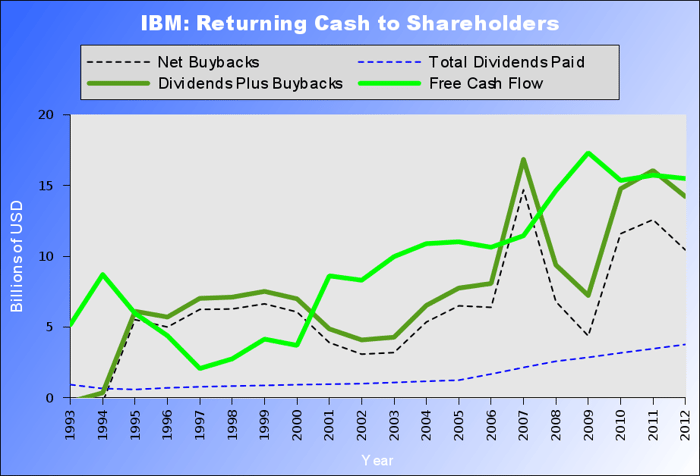 That thin blue line at the bottom of this chart is IBM's dividend payouts that made such a big difference in our discussion above. Wouldn't you agree that it looks tame next to the much fatter share buybacks?

In these two decades, IBM has collected $186 billion in free cash flows and pumped 66% of it, or $123 billion, right back into share repurchases. Sure, IBM would still have beaten the Dow quite comfortably without these buybacks, but the effort more than doubled the total value of your 1993 investment. Who's complaining about an additional nine-bagger?

The company has occasionally returned more cash to its owners than operations were able to crank out. That was the case in the late 1990s, when shares were cheap and IBM went through a serious rebuilding phase. It was true again in 2007, when the company borrowed $12 billion to retire $14.7 billion worth of shares. And Big Blue is tapping into the debt market right now while borrowed capital is cheap.

Last year, the company spent $3.8 billion on dividends and $10.5 billion on buybacks. If all that cash were funneled into dividends instead, the effective yield today would have jumped from 1.6% to a fantastic 6%. Don't forget about buybacks when thinking about management's generosity toward shareholders.