Investors are finicky; one moment a trend is the next big thing and the next moment it's a forgotten memory. When natural gas prices plunged a few years back, the shares of exploration and production companies went down as well. Investors are once burned and twice shy when it comes to investing in producers with heavy natural gas exposure.

Instead, many savvy traders have taken the opposite bet and shorted the companies with heavy natural gas production. One such company is Magnum Hunter Resources (NYSE: MHR), which had more than 20% of its outstanding shares sold short at last count. Could these investors be burned again as this hated stock becomes a market darling?

Back in the heart of the financial crisis Magnum Hunter Resources' stock bottomed out at just $0.37 a share as it collapsed along with natural gas prices. At its low the company's entire market cap was just $10 million, and it looked like the company's days were numbered. Instead, new management took over and improved operations -- now its market value has soared in excess of $500 million.

Still, investors will point out the fact that too much of this company's production comes from natural gas and that it's a big risk given what's happened in the past. At last count, 45% of Magnum Hunter's production was natural gas, which is too much given that it also has a lot of debt. Also at last count, the company had more than $600 million in debt and another $300 million in preferred stock outstanding. When you add a production mix heavily weighted to natural gas and a balance sheet weighted down by a heavy debt load you get a stock that's hated by the market.

Why it should be loved
The thing that the market is missing is that this isn't the Magnum Hunter of old. Its production mix is moving solidly toward oil and liquids, as you can see in the following chart: 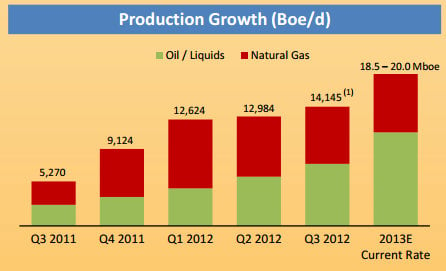 That mix will only get better as the company now has operations in three of the best liquids growth plays in the country. As you can see in the picture below, it has acreage in the Williston Basin, Eagle Ford Shale, and Appalachia: 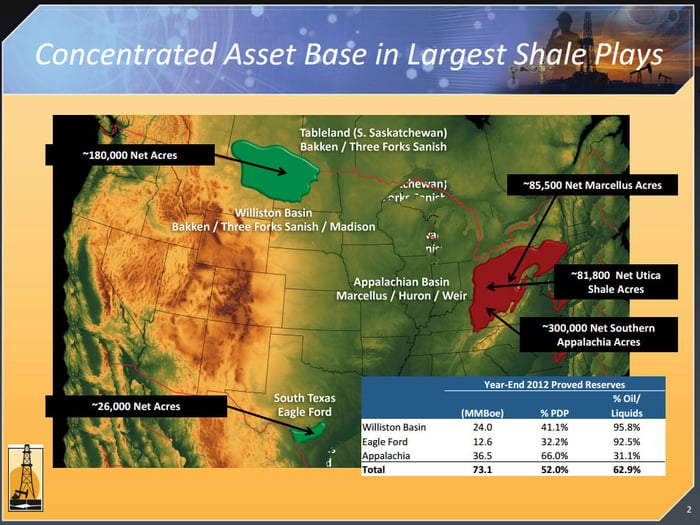 The Bakken is an amazing oil-rich formation that's been one of the keys to growing our nation's oil production in a way that we never imagined was possible. That growth has been a boon for small producers like Kodiak Oil & Gas (NYSE: KOG), which has grown production by more than 100% in each of the past three years. With more than 150,000 net acres, Kodiak still has a lot of room to grow. Interestingly, Magnum Hunter has even more acres in the area.

I'll also point out that the company has a small but exciting position in the Eagle Ford. This is a play that's getting the most attention these days from major producers. Chesapeake Energy (OTC:CHKA.Q), for example, is spending 35% of its entire capital budget on developing its liquids-rich Eagle Ford acreage. As the country's No. 2 natural gas producer, that says a lot. Meanwhile, top U.S. independent ConocoPhillips (NYSE:COP) has a five-year plan to spend $8 billion to develop its Eagle Ford acreage. That's more than 30% of its planned U.S. onshore capital spending. With so much capital pouring into the Eagle Ford, you know that Magnum Hunter's investment dollars are being spent well, especially when 100% of its acres are in the oil window.

Finally, Magnum Hunter has a very large position in Appalachia, which includes both the Marcellus and Utica Shale. Until gas prices rise, the key here is the company's Utica Shale position. The Utica, which is very similar to the Eagle Ford with three distinct windows, has very exciting potential. According to Gulfport Energy (NASDAQ:GPOR) the Utica is "one of the most promising up-and-coming oil-levered plays in North America." That means a lot coming from a company with acreage in the Canadian oil sands and the Permian Basin.

My Foolish Take
When you add it all up there is a lot to love about this company. The key takeaway here is that its liquids-focused growth will continue to push down the natural gas portion of its production mix. As it does, these higher margin liquids will give the company more flexibility to fix its balance sheet. That doesn't sound like an appealing short-sale candidate if you ask me.

Why so Much Hate for This Natural Gas Company? @themotleyfool #stocks $CHKA.Q $COP $GPOR Next Article
Current