After sporting impressive capital ratios throughout 2012, and expanding into new markets with the acquisition of RBC Bank, PNC Financial Services (NYSE:PNC) will be rewarding its shareholders with an increased dividend.

Thursday evening, the Federal Reserve released the second part of the annual banking stress test results, which examined the largest U.S. banks' ability to make capital distributions and maintain certain capital levels during an economic downturn. While it stood out as one of the most well-capitalized banks during last week's stress tests, PNC shareholders received more good news, with an increased dividend, but they did not receive details.

Similar to its decision during last year's tests, PNC did not release the amount by which it plans to hike its quarterly dividend. The bank's board of directors will consider the official increase amount in April. Last year, PNC boosted its dividend roughly 17%. The company did acknowledge that it did not include a share repurchase plan in its capital plan because of its acquisition of RBC Bank, and other recent expansion efforts.

Despite the lack of details, these Comprehensive Capital Analysis and Review (CCAR) results highlight the strength and sustainability of PNC's balance sheet and evolving strategy.

How it will impact its capital ratios
Despite posting a lower actual Tier 1 common ratio in Q3 in 2012 compared to 2011 because of acquisitions, PNC posted an impressive minimum Tier 1 common ratio of 8.7% under the severely adverse scenario. That hypothetical 8.7% was determined with the assumption the bank will continue its $0.35 quarterly dividend throughout the nine-quarter stress period. Even with its newly approved capital plan, the CCAR results revealed that PNC's Tier 1 common ratio would only fall to 8.55%. 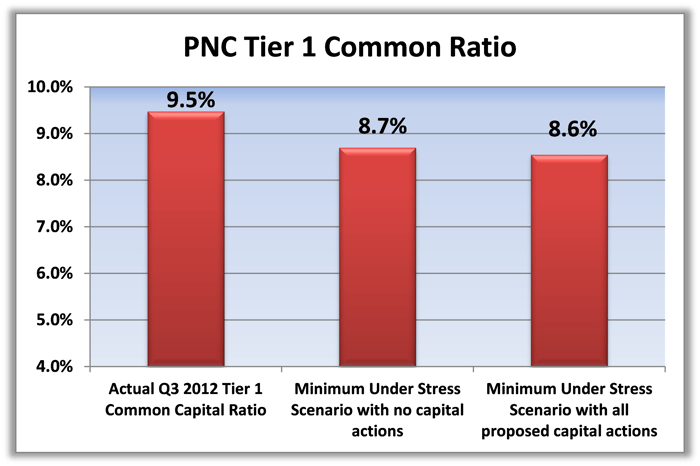 Regardless of some investors clamoring about the ease of the tests this year, it is hard to deny the improvements PNC has made to its balance sheet and business prospects. PNC's focus on building a stronger balance sheet, while continuing to expand into new markets when other banks are scaling back, should give investors confidence regarding the prospect of future capital gains, as well as dividends.