Even with its stock sitting near a 52-week high, Costco (NASDAQ:COST) keeps giving investors reasons to continue buying.

The latest excuse to bulk up on shares came when the company reported earnings earlier this week. Costco's sales were up 8% on the quarter, while profits surged by 38%.

Yes, that profit figure was inflated by accounting for the special dividend it paid shareholders in December. But if you back that out, you still get a blistering 22% rise in profits on a solid 5% growth in comparable-store sales. Overall, for the first half of its fiscal year, the retailer booked a cool $1 billion in profits and more than $47 billion in sales. Costco's sales growth beat Wal-Mart's 2.3% rise at Sam's Club locations. And it trounced Target's 0.4% growth on the quarter.

Those are all great reasons to have bought the stock a while back. But prospective investors have a lot to be excited about, too. There are solid reasons why Costco shares look enticing right now.

Globally, Costco expects to open a total of 28 new stores this year. That's almost double the growth from last year's tally, and will be the highest annual number of warehouses that it has opened since 2007.

And international expansion continues to be a major focus, as only one of last quarter's new warehouses was opened stateside. Two more were launched in Canada, one opened in central England, and one was brought to the outskirts of Seoul, Korea. Costco's business model translates well across geographies.

All of this store growth is good for the usual retail reason: It will boost the square footage available as selling space next year. But the real benefits will accrue in the years ahead as those stores mature.

Costco's warehouses get better with age. By a lot.

Consider that the 15 locations Costco opened last year averaged a strong $105 million in annual sales, while the company's oldest stores kicked in a much higher figure, $166 million last year.

New warehouse locations need time in order to build up a large membership base. And you can see a steady trend of increasing sales figures as the stores grow up. 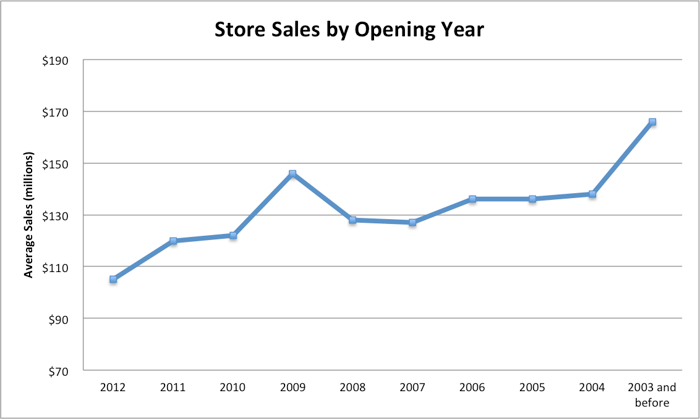 Loyal membership base
And speaking of members, Costco's subscriber base just took another step toward loyal fan club. The retailer raised subscription rates about a year ago. That helped boost membership fees to 2.17% of sales, which is a key reason that the company can sell merchandise at such razor-thin margins. Membership fee revenue was about $2.1 billion last year, accounting for three-quarters of Costco's operating income.

But that fee increase had no negative impact on membership turnover. In fact, just about all of Costco's renewal rates are on the upswing. Business member renewals clocked in at 93.9% in the U.S. and Canada last quarter, up from the already stellar 93.7% two quarters ago. Globally, where rates are pushed down by the large percentage of new markets, renewals still managed to tick higher -- from 86.4% to 86.5% over two quarters. Costco members are getting plenty of value out of their membership, and they're renewing at ever higher rates as a consequence.

Happy investor base
It's not just Costco's stores that build loyalty, though. The company is a longtime Wall Street darling, meaning that shares hardly ever go on sale. The stock has been perched at around 25 times earnings for the past few years. That's a big premium compared to other national retailers like Wal-Mart and Target, which fetch closer to 15 times trailing earnings. And Costco is actually a bit more expensive than it looks on a trailing basis, thanks to that special dividend goosing profits this past quarter.

Still, looking forward, Costco is trading at about 20 times expected earnings for next year. With a long runway of geographic expansion ahead and a fiercely loyal membership base, I think now is as good a time as ever to begin a position or bulk up on an existing one in this retailer. Costco looks set to continue to outperform from these levels.

A good time to bulk up?