We're still months away from a possible launch of Apple's (NASDAQ:AAPL) latest iteration of its iOS, but some people close with Apple are already saying iOS 7 won't be the revolutionary operating system that some are hoping for. Apple is much more than its mobile operating system, but at a time when Apple's stock is waning so harshly, so the company could use a new OS to bring back some of its sparkle.

Earlier this week, BlackBerry CEO Thorsten Heins told the Australian Financial Review, "The rate of innovation is so high in our industry that if you don't innovate at that speed you can be replaced pretty quickly. The user interface on the iPhone, with all due respect for what this invention was all about, is now five years old ." While it's debatable how much the CEO of BlackBerry can speak on smartphone innovation, it is true that the user interface of iOS has, for the most part, stayed the same since 2007.

Obviously, big updates with each new version have come along, but with an iOS 7 launch looming this summer, many are hoping for a huge leap forward. But some people close to Apple have stressed that iOS 7 won't be the drastic change some may be anticipating. An iOS developer, Guy English, who's close with people at Apple, said this on well-known Apple blogger John Gruber's podcast, "Maybe iOS 8 will be interesting, but iOS 7 will be less of a leap than many people are hoping for." He went on to say, "... no matter how impressive iOS7 will be, it's not going to be the first iPhone ."

Skepticism like this is not completely unwarranted. Last year, Apple CEO Tim Cook fired the company's chief of iOS Scott Forstall after the Apple Map fiasco and installed Jonathan Ive, Apple's longtime hardware designer, and Craig Federighi. Although having fresh eyes working on iOS could eventually bring radical change to the mobile platform, this will take time. Ive and Federighi have only been in charge of the next iOS since October, which isn't much time to build a completely new OS from the ground up.

Why investors should care
A new iOS isn't technically a moneymaking product. It's baked into Apple's latest mobile devices and used as a selling point for the products. But investors shouldn't overlook how important Apple's mobile OS is to the iPad and iPhone. According to an IDC report in Q4 2012, developers prefer to make apps for iPads and iPhones over any other mobile platform. 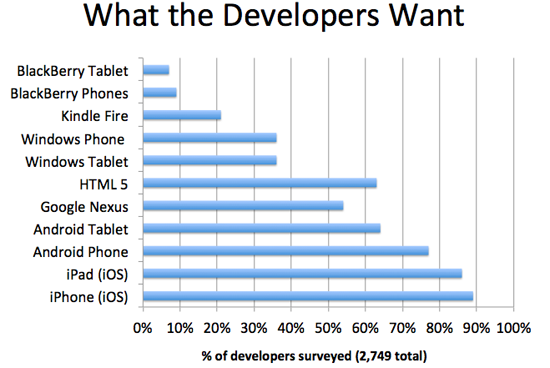 This helps Apple get more apps into its Apps Store, or at least get them sooner. More apps, and better apps keep users tied into Apple's ecosystem and make them less likely to switch to another product.

As Android sales increase globally, iOS will continue to come under constant pressure to be better. Recently, The New York Times reported that Android tablets will overtake the iPad this year. 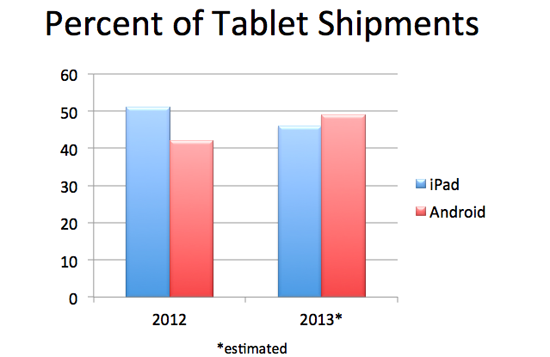 Shifts in the amount of Android tablets and phones in the market could certainly change developer's sentiment on iOS. Consumers don't necessarily chase what developers build for, but as Android tablets overtake iPads consumers may be more willing to use the Android platform for both their smartphone and tablets -- cutting into Apple's ecosystem.

A lackluster iOS won't spell doom
The disparity in customer satisfaction research makes it difficult to tell how customers truly feel, but if even some of the research on Apple's lower customer satisfaction is true, than significant upgrades to the current OS could boost consumer sentiment. Morgan Stanley's analyst Katy Huberty said on CNBC recently, "This [iPhone] 5S cycle this year will be about a killer feature that drives consumers increasingly to the platform, and that increases the value of those 500 million accounts ."

If that's true, than Apple investors could be very happy with the next iteration of the iPhone and iOS. But even if Apple doesn't release huge upgrades to its next version of iOS, it's unlikely that a mediocre OS upgrade this cycle will spell doom for the next iPhone update. What Apple really needs to do is build an iOS that leapfrogs Android features and causes consumers to think twice about switching away from their iPhone -- or give them reasons to come back.

Apple's Next iOS: Why Investors Should Care @themotleyfool #stocks $AAPL Next Article
Current