We talk a lot about home prices. We compare average prices today to a year ago, 10 years ago, or more.

But there's a flaw in doing this. To rationally compare the price of an average home today to an average home any number of years ago, you have to assume that the two homes are the same -- apples to apples. But they're not. The average American home has changed drastically over the last three decades.

The median new home built in 2012 was 2,309 square feet, according to the Census Bureau. That was a new record, up nearly 10% in the last decade. Plot the average since 1974, and our humble abodes have grown by more than half: 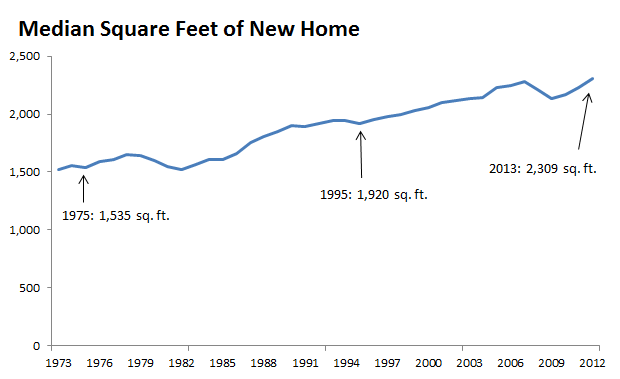 There are two takeaways from this.

One, keep in mind that this is the median, not the mean average that would be skewed upward by a few Russian oligarch's palatial estates. The average new home is far larger today than it has ever been. Why is that? Is the average American richer? Compared with three decades ago, probably. Compared with a decade ago, probably not. What's changed is that we're spending more of our income on housing. In 1984, a typical household devoted 16% of their budget to shelter. By 2011 that figure was up to 19%, according to the Bureau of Labor Statistics. As I've shown before, the relative cost of things like food and apparel have dropped over the last few decades, and an average household now devotes about half as much of its budget to food today than it did in the 1970s. Part of that savings looks like it's made its way into housing. Even if total wealth hasn't increased much, the composition of what we're spending money on has.

Second, this should change the discussion about home prices. The average new home sold for $221,000 in 2010, which is virtually unchanged since 1987 when adjusted for overall inflation. But adjust for size, and the average new home today is 24% cheaper today than it was then, simply because a buyer today is getting more square footage per dollar. Thinking this way also changes how we talk about utility bills. Even if energy prices stayed flat, changes in average home sizes mean it should cost 50% more to heat or cool an average home today than it did in the 1970s.

And even though we're living in larger homes, the size of an average household is shrinking -- a function of a lower birthrate. In 1975 the average American household had 2.94 persons. By 2004 that was down to 2.57. Oddly, as recently as 1986, just 12% of new homes had three or more bathrooms. Last year, nearly a third did. Indeed, the average new home now has more bathrooms than occupants. Look how far we've come, grandma.