Giant oil discovery in the Gulf of Mexico has big implications for ConocoPhillips and its partners.

I've recently spent a good bit of time drilling down into ConocoPhillips' (COP -2.87%) future plans. Despite spending billions of dollars over the next few years, the company will only be able to grow its production by 3%-5% annually through 2017. A good portion of that development capital will be spent just to overcome the natural decline of the company's base assets.

Looking past 2017, the company has several exploration and appraisal projects under way. The company is planning to spend about $2.5 billion, or 15% of its capital budget, this year alone in hopes of seeing a return beyond 2017. One of those exploration projects that I highlighted includes the potential of the company's Gulf of Mexico prospects (see below). That potential is becoming a little clearer as the company and its partners provided an exciting update to the project. 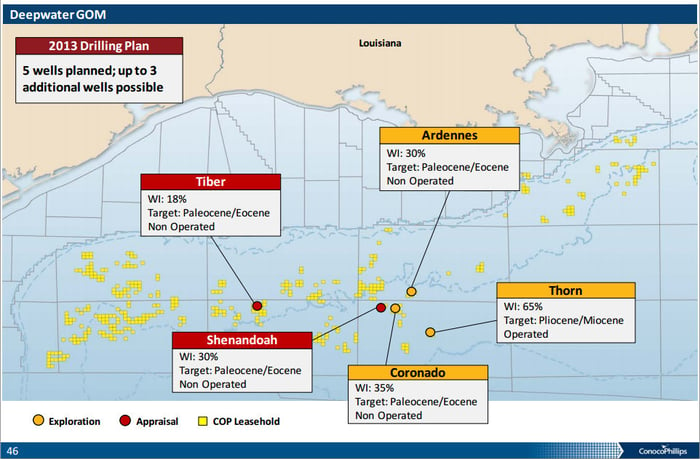 What happened?
ConocoPhillips, along with partners Anadarko Petroleum (APC), Cobalt International Energy (NYSE: CIE) and Marathon Oil (MRO -0.61%), announced a significant oil discovery at the recently drilled Shenandoah appraisal well in the deepwater of the Gulf of Mexico. The partners encountered more than 1,000 feet of net pay, which refers to the thickness of a reservoir capable of producing commercially viable oil and gas. For perspective, the first Shenandoah appraisal well drilled in 2009 encountered about 300 feet of net pay. The well was drilled at a water depth of about 5,800 feet and the well itself was drilled to a total depth of 31,405 feet.

This discovery bodes well for Conoco's Corondo wildcat exploration well located just 12 miles away. That well, in which it is partnered with Chevron (CVX 0.26%) and Anadarko, was drilled to a depth of nearly 32,000 feet in over 6,000 feet of water. The partners are still evaluating the results and it's likely that additional appraisal wells will be drilled to determine the extent of the resources in place. However, the initial results according to ConocoPhillips are very positive.

What's it mean?
This has the potential to be a "giant" project according to Anadarko, as the Shenandoah marks one of the company's largest oil discoveries in the Gulf of Mexico. The 1,000 net feet of oil pay is of much higher quality than anything else discovered in the Lower Tertiary of the Gulf. It has the potential to be one of the most prolific new areas in the deepwater of the Gulf.

Offshore oil and gas production comes with its share of risks; however, the potential payoff from wells like this make the risks worth it. ConocoPhillips has quietly built up a large leasehold position in the Gulf and is now a top-five leaseholder in the deepwater with more than 2 million net acres. The long-term potential is really exciting given the early results from its exploration and appraisal prospects.

My Foolish take
It's a good day to be a long-term investor in ConocoPhillips. The key to these projects is keeping that long-term mind-set as these projects are unlikely to add a significant impact to the company's production or earnings for years to come. The good news for investors is that the company pays a very generous 4.5% dividend while you wait for that future upside to be realized.

Fool contributor Matt DiLallo owns shares of ConocoPhillips. The Motley Fool recommends Chevron. We Fools may not all hold the same opinions, but we all believe that considering a diverse range of insights makes us better investors. The Motley Fool has a disclosure policy.