It was the year 2007. The Apple iPhone had just hit the scene, and most consumers didn’t even know what a smartphone was, let alone what it would do for the world. With its introduction, the iPhone brought the mobile computing revolution to the forefront, forever changing the world in the process. Fast-forward less than six years later, and a record 918 million smartphones are expected to ship this year across the planet. For those keeping track at home, that’s almost three smartphones for every one PC shipment!

Companies that failed to see the sudden shift have seen their attractiveness wane with investors. As these companies attempt to claw their way back into the realm of investor relevancy, those who fully understand what transpired stand to gain valuable perspective. 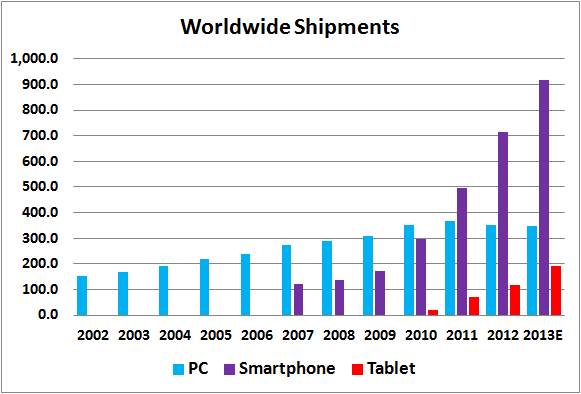 Last year marked the first year since 2002 that PC shipments witnessed a worldwide decline. For something that’s been declared dead by many industry pundits, you would expect that PC sales had fallen off a cliff by now. Although a 3.5% year-over-year decline in sales could be considered alarming, given the fact that Microsoft (NASDAQ:MSFT) failed to revitalize the PC industry with the release of Windows 8, I think it’s a little early to call the PC officially dead. For now, the evidence suggests that the PC has experienced a bit of maturation in an era where users have rapidly shifted their preferences to a combination of smartphones and tablets. However, I do not believe investors should conclude that since smartphones and tablets have seen rapid adoption, it means that PCs will no longer be adopted.

What this really means: chips have changed 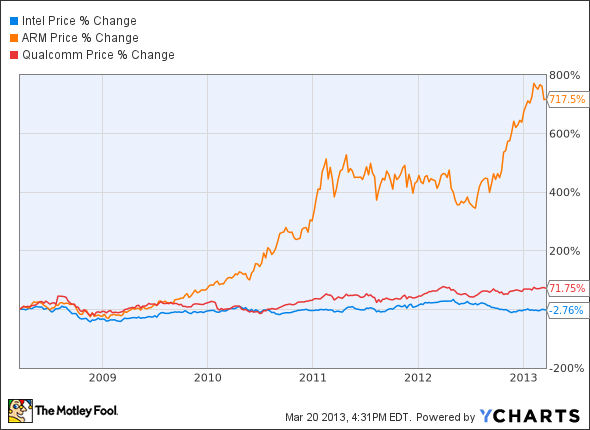 This wasn't necessarily too relevant for the end user, but for the chip investor, it meant the difference between strong share appreciation and stagnation over the last five years. Mobile-focused companies like Qualcomm and ARM Holdings have largely taken the wind out of Intel's (NASDAQ:INTC) PC-entrenched sails. In the coming years, Intel hopes it can reclaim what it missed during the rise of mobile computing with the introduction of compelling mobile chips.

Investors shouldn’t take this to mean that if Intel sells mobile chips, it will automatically lead to better days ahead. This could be the case, but it’s largely dependent on a number of factors, including how successful Intel is within mobile, and what kind of prices it can sell these chips for. At this time, Intel doesn’t command the pricing power in mobile like it did during the PC heydays. This will likely mean that Intel will have to compete on price, which could potentially threaten its gross profit margin.

The year that changed everything

It wasn’t until last year that the assault on the PC showed up in the numbers. It took nearly 830 million devices to noticeably chip away at the PC’s throne. I don’t know about you, but that’s a lot of devices for only a 3.5% decline in annual PC sales.

I think the bigger takeaway isn’t that the smartphone and the tablet are “killing” the PC, it’s that mobile computing devices threaten to prolong the PC-replacement cycle. If consumers switched from upgrading their PCs from every four years to every five years, it would be the equivalent of killing 20% of PC demand. Since PCs haven’t seen a decline anywhere near this level, the ominous threat of mobile computing destroying PC demand is likely still a ways off.

The storm shall pass
Thanks to softness in China related to the Chinese New Year, and stricter enforcement of anti-corruption measures, IDC now expects that first quarter PC shipments could decline by as much as 10% year over year. Although dramatic, it wasn’t enough for IDC to change its forecast that calls for a modest 1.3% drop in PC sales this year. Moreover, IDC expects that PC shipments will begin to rise again in the future, driven largely by emerging market growth. By 2017, the firm expects worldwide PC shipments will reach 382 million units, which represents a more than 10% increase from its 2013 estimates. By that time, the majority of PCs should be able to compete better against the convenience features of tablets, while still offering greater productivity. Perhaps it’s a bit premature to call the PC dead?