It’s not easy being an oil giant. You’re in a constant struggle to find new sources of oil and gas production to offset the natural decline of wells currently producing. Those new sources of energy are located in difficult-to-reach places that are accessible only by employing deepwater drilling technologies and hydraulic fracturing.

For ExxonMobil (NYSE:XOM), the struggle is even greater. Not only does the company deal with the law of large numbers as it tries to grow its massive energy business, but because of its size it’s a name that everyone knows. With that name comes great expectations, and few of those expectations align, meaning that at any point in time, someone is unhappy with the company.

This massive burden of expectations can cause a company to make decisions that might not be in its best interests. The company can choose to placate its investors by sending large portions of its massive cash flows back to line their pockets through both share-buyback and dividend increases. This takes cash away from what could have been spent on growing its production to meet the world’s energy demands.

According to the company, those future energy demands are huge. According to the company's estimates, global energy demand is expected to grow by about 35% by 2040. The company sees oil demand growing by about 0.8% annually, while natural gas demand is expected to grow at a much faster clip with an expected 1.7% annual growth rate. That means companies like Exxon need to grow production at least as fast to keep up with demand, if only to keep prices stable.

If its past is any indication, that might not be as easy as it sounds. You see, while the company has grown its production per shares by 48% from 2003 to 2012, overall production is up less than 1% per year. Some $207 billion in share repurchases have helped hide slow production growth over the past decade.

Despite spending $39.8 billion last year and more than $41 billion this year, total oil and gas production this year will be down 1% in 2013. Looking ahead, the company plans to spend about $38 billion per year through 2017, which it expects will grow production by 2% to 3% annually. However, this is a company that, according to analysts, hasn't hit its annual production target since 2006. With all the money flowing into and then out of the company, has it lost its way? Is this once great energy empire beginning to crumble?

I don’t think so. The company has 31 major project start-ups scheduled to deliver production volume growth between now and 2017. The projects are expected to add more than a million barrels of oil equivalent per day of production, and 90% are focused on the more profitable oil and natural gas liquids. The company has a diverse set of projects, spread around the globe. Indeed, the global empire is expanding, not crumbling:

Last year, the company delivered a reserve replacement ratio of 115%. That means the company was able to find new sources of future production in greater quantities than what it produced last year. The company has 87 billion barrels of oil equivalent reserves in various stages of development. So, no, the empire is nowhere near crumbling. If anything, it's about to hit a new phase of production growth.

Does that mean Exxon is a great investment? Maybe not, especially relative to some of its peers. This is a company that's already trading at a premium to these peers. Its production growth rate is lower, and at 2.6%, it does have a lower dividend yield. For example, ConocoPhillips (NYSE:COP) projects to grow its production by 3% to 5% annually through 2017 while sporting a 4.5% dividend. Meanwhile, Chevron (NYSE:CVX) has a 3% dividend yield while it expects to grow its production 6% annually through 2017.

They aren't alone in growing production faster than Exxon. Joining them with a projected 5% annual growth is Royal Dutch Shell (NYSE:RDS.A). The difference here is that Shell pays its investors a top dividend rate to wait for that growth to materialize, as its dividend yield comes in at more than 5%. Exxon's dividend yield is the lowest of the bunch because it's focused its capital on those share buybacks.

Sure, the company could spend more money to produce more energy, but instead it took a total return approach, which included dividend increases and share buybacks along with plenty of capital spent on future growth projects. Over the years, this path has served its investors well: 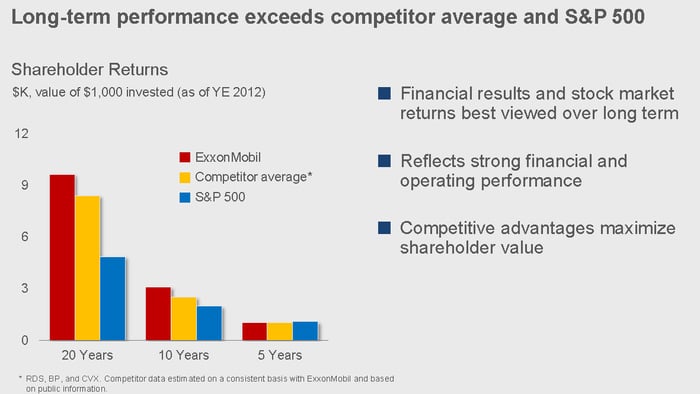 That balanced approach will keep Exxon as the top energy holding for many investors for years to come. While it might not outperform those peers, it's still likely to be a pretty good investment over the long term. The ExxonMobil empire is rock solid, if you ask me.