These two market leaders are on the bargain counter. Opportunities like this don't come around every day.

"It's far better to buy a wonderful company at a fair price than a fair company at a wonderful price," Warren Buffett, the world's greatest investor, has famously said. But sometimes Mr. Market offers investors emotionally driven, irrational bargains, and, rarely, he'll even offer you a wonderful company for a wonderful price. When this happens, it's definitely time to buy. Going into April, Apple (AAPL 0.17%) and Baidu (BIDU -0.69%) -- two profitably growing market leaders -- are on the bargain counter.

Apple
Apple's stock is down more than one-third from the company's all-time high in September. 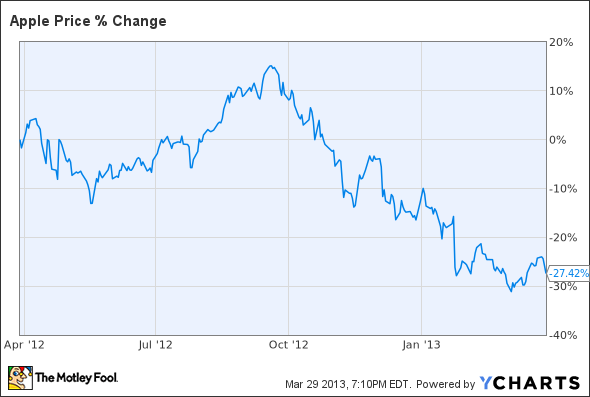 iPhone sales didn't live up to the Street's expectations in light of increasing competition from Samsung, and the stock plummeted. At 51% of sales, the health of the iPhone product line is ultimately the biggest driver of the company's stock price.

Furthermore, gross profit margin was down significantly, at 38.6%, compared to 44.7% in the year-ago quarter. The decline was mainly a result of a significant redesign on the casing of the iPhone 5 compared to the iPhone 4 and 4S that boosted unit costs. Also, the company had an overwhelming amount of sales during the quarter coming from recently launched products -- 80% of sales, in fact. With so many new products sold in one quarter, the company's unit costs were, on average, higher on the cost curve than usual.

But at 10 times earnings, the stock isn't priced for growth anymore, so a number of drivers could potentially boost the stock. Two potential drivers, in fact, are just around the corner:

Baidu
The online search king has taken a significant beating over the last 12 months and is down 40%. 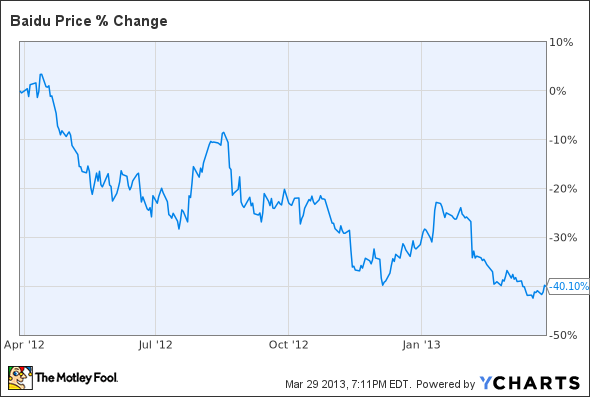 There are three main reasons for Baidu's significant decline:

Web browser and antivirus software maker Qihoo's aggressive expansion into online search during 2013 no doubt played a role in Baidu's decelerating growth. But Baidu still possesses significant advantages over Qihoo. For instance, Baidu controls about 70% of China's paid search dollars and an even larger percentage of search queries. Baidu's advantage is even more evident when you compare the companies' balance sheets. Baidu boasts $14 billion in cash and cash and short-term investments. Meanwhile, Qihoo has a paltry $344 million.

The company's decelerating growth isn't a significant concern, either; EPS still increased a whopping 36% year over year during the company's most recent quarter. Maybe it's not the 77% increase the company reported in the year-ago quarter, but it's still significant in light of the stock's conservative valuation at just 13.9 times forward earnings.

Finally, Baidu's substantial investments in research and infrastructure promise to create more opportunities. The company generates significant cash, and investors should hope that management allocates that cash to places that build shareholder value. Management explained that it is increasing spending in efforts to build out its mobile product portfolio and focus on an increase in marketing efforts. Both of these are excellent strategic moves for long-term investors.

Don't wait too long
It's tough to buy when the sentiment surrounding a stock is negative, but going against the crowd often works out great for investors -- especially when the stocks on the bargain counter are leaders in their respective markets, like Apple and Baidu. I've crowned both companies top picks among my brief list of outperform CAPScalls. Opportunities like this don't come around every day.

All of these reasons might compel you to unleash your inner contrarian this April. If you need a final nudge in that direction, consider another famous quote from Warren Buffett: "Be fearful when others are greedy and greedy when others are fearful."