Are phablets a fad? Flurry Analytics sure thinks so. Apple may eventually come out with a larger iPhone, but don't expect an iPhablet.

By now, you've probably heard of the rising consumer trend toward "phablet" devices, oversized smartphones that flirt with tablet turf. Phablets have played a notable role in Samsung's rise to the top of the smartphone market, thanks to the relative success of its Galaxy Note lineup.

Analysts and investors alike continue to call for Apple (AAPL -1.00%) to release a larger iPhone to address that growing market. Investor perception that Apple is falling behind the times has contributed to the Mac maker's pullback since September. Although if you look at the actual data, there's a big disconnection that casts doubt on how meaningful the phablet trend really is.

Data from Strategy Analytics showed that the iPhone 4S (3.5-inch display) handily outsold the Galaxy S III (4.8-inch display) last year, which certainly implies that Apple can afford to wait. The newest evidence comes from Flurry Analytics, which now gathers data on 1 billion mobile devices in use around the world.

Flurry considers a phablet as a device with a 5-inch to 6.9-inch display. Its data shows that only 2% of device models in use qualify as phablets. 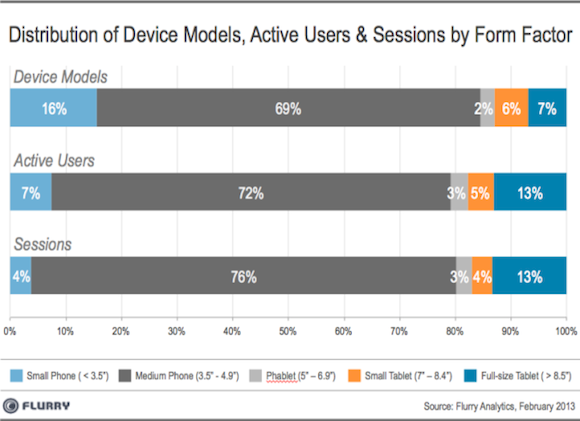 The bulk of devices fall into the "medium phone" category, which includes 3.5-inch to 4.9-inch displays, including the iPhone. This is why Flurry goes as far as to call phablets a fad. By these definitions, Samsung's newest Galaxy S4 barely crosses into phablet territory with its 5-inch display, while the predecessor Galaxy S III was simply on the larger end of the "medium phone" spectrum with its 4.8-inch display.

Even within Google Android, the predominant phablet platform, only 7% of active users are using the hybrid devices. 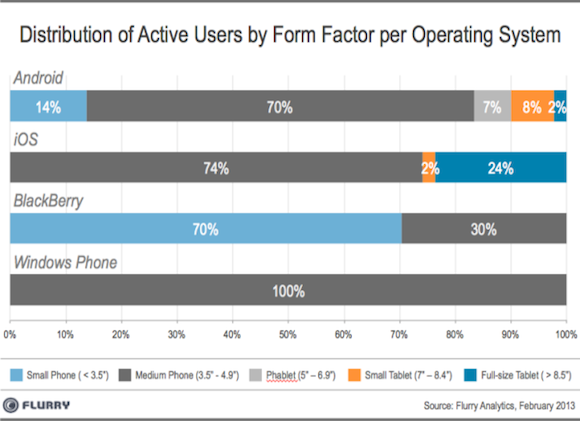 There's still a case to be made that Apple has room to expand up into the 4.5-inch to 4.8-inch display segment, since the market seems to be honing in on that form factor. Still, don't ever expect an iPhablet to compete directly with the 5.5-inch Galaxy Note 2, and don't expect a larger iPhone until 2014.