After proposing new standards for reducing sulfur in gasoline, the EPA should be extended an olive branch from the refining industry rather than a list of grievances.

Just last week the Environmental Protection Agency, or EPA, announced plans for cleaning up the nation's transportation fuels. The new standards would cut the sulfur content of gasoline by 67%, and the content of nitrogen oxides, or ground-level ozone, by 80%. Although the health benefits alone could total billions of dollars per year, the refining industry is warning consumers that they'll have to fork over more money at the pump.

It seems the ongoing spat between the EPA and refining industry over mandatory ethanol credits hasn't left either side running on empty. The two are now battling over how the new standard will affect gasoline prices. The EPA says prices will rise by one penny per gallon, while a study from the American Petroleum Institute claims the number will be between six and nine cents. In the end, the added costs could easily be swallowed up by several consumer- and industry-friendly trends. In fact, it's likely that the mandate could actually help boost profits for refining companies.

1. Upgrading domestic infrastructure
As a general rule of thumb, oil tends to get "dirtier" as it becomes more difficult to recover. That poses a problem for refineries processing the growing volumes of unconventional hydrocarbons flowing out shale reserves and the Canadian tar sands. The Energy Information Agency, or EIA, has watched the sulfur content of crude oil inputs into American refineries climb in recent years as conventional oil reserves dry up. Here's a brief comparison of sulfur content of crude oils sourced from various locations: 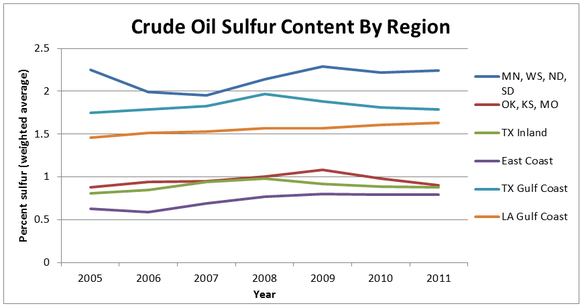 Despite the heavier crude going into refineries, gasoline prices today are $0.30 lower than they were this time last year. How? One reason: Companies processing the influx of shale oil have already begun responding to changes on the ground and show no signs of slowing. HollyFrontier (HFC) has raised its budget for capital expenditures from just $140 million in 2011 to an estimated $400 million in 2013. BP (BP -0.34%) spent that much bringing a single refinery in Ohio into the future.

Not all refineries are created equal, but no novel or prohibitively expensive technology is required to comply with the new standards. One senior official said that only 16 of the nation's 144 refineries would require major capital investments. In other words, the industry has already begun preparing facilities for heavier crudes and cleaner fuels.

The new standards will act as the extra motivation needed to expedite capital projects and revitalize all of America's refining capacity. That's great news for investors, since improving infrastructure has been the driving force behind the most profitable trend sweeping the industry: exports.

2. Fanning the flames of exports
The proposed rules will normalize the quality of gasoline sold in all 50 states to that of California, Japan, and the European Union -- all of which have taken steps to reduce impurities. Currently only 29 domestic refineries can efficiently produce in-spec gasoline and ultra-low-sulfur diesel for exports. Of that total, 20 are located in California for the state's consumption. Imagine what the trend in exports could look like in five years when all refineries making gasoline have the ability to sell products internationally.

Chevron (CVX 0.96%) and Valero (VLO 2.88%), which own 37% of California's refining capacity, were among the first to capitalize on the crack spread and refining efficiencies for exports. Many blamed the focus on exports for the spike in gasoline prices following a series of refinery outages in the state last summer. Executives shot back by saying that exports keep refineries "operating at high capacity, improving efficiency, and keeping costs down". It seems a bit silly for them to change their tune now.

Essentially, the proposed rules would open up newer markets -- and expand current markets -- for American-made gasoline and allow more refineries to play the export card. Aside from international trade, the rules should also be welcomed news for California residents. The high volatility experienced in the state's gasoline prices will become a thing of the past as more refineries are able to step in when problems arise.

Foolish bottom line
Mandating cleaner gasoline would be a rare win all around for public health, investors, the refining industry as a whole, and the economy. It would be just the thing needed to swiftly bring domestic refining infrastructure into the 21st century, which will be necessary to keep up with the volume of unconventional oil flowing out of the country's veins. It seems that the refining industry should be extending an olive branch to the EPA rather than a list of grievances.