New data shows Windows Phones may have taken the No. 3 smartphone spot away from BlackBerrry, but it may be too early to decide a winner.

After a quick look at latest numbers from Kantar Worldpanel, investors will see that over the past three months Microsoft (MSFT -0.23%) Windows Phones have made some significant gains, Android units are continuing to take more market share, and iPhone sales remain stable across the board. But according to the research, there is one smartphone maker falling behind the pack -- but maybe not for long.

Where they all stand
Kantar took a look at the latest smartphones sales over a three-month period ending in February and found these interesting, but not entirely surprising, stats. 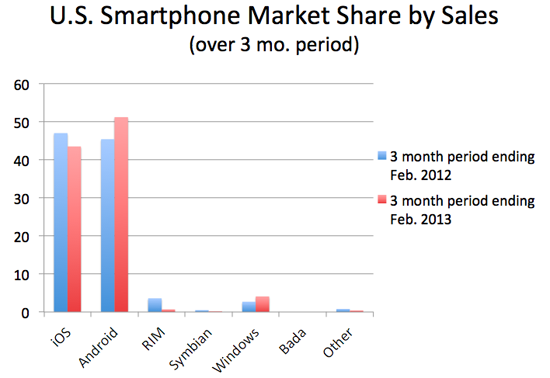 This chart may not be new information for many investors, considering that its not news that Apple's iOS and Google's Android dominate the U.S. market. It's worth pointing out the 3.5% drop in iOS' share and increase of 5.8% for Android, but the most important change is the flip-flop from BlackBerry (BB -2.00%) holding the No. 3 smartphone spot to Windows Phone taking it with 4.1% of the market by sale over the three-month period.

What isn't fully reflected, though, is BlackBerry's latest product launches and its new BB10 operating system (more on this in a moment).

Looking at the U.K. numbers, we see a similar picture with a growing Android share, stagnant iOS share, and BlackBerry losing its place to Windows Phone. 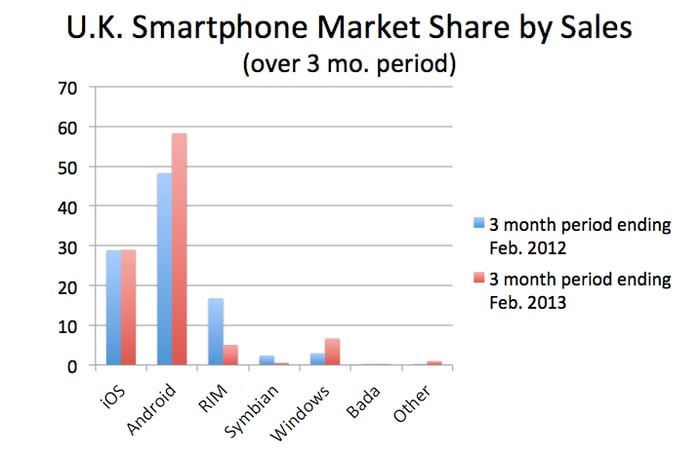 This graph shows that BlackBerry's drop has been much more dramatic in the U.K. than in the U.S. The company lost 11.7% market share in the U.K. during those three months compared the same three months last year. Meanwhile, Android shot up 10% and Windows Phones went up 3.7%. But as we mentioned a little earlier, there's more to BlackBerry than the charts may show.

Let's find out why.

A possible silver lining for BlackBerry
Kantar Worldpanel's research only encompasses one month of BlackBerry's latest operating system and Z10 smartphone launch in the U.K. and basically zero time for sales of the new product in the U.S. So while Windows Phone has made definite gains in both markets, and BlackBerry's numbers have fallen, it's still may be too early to truly give Windows Phone the No. 3 smartphone market share spot.

Obviously, BlackBerry faces stiff competition from Windows Phones in a market that's completely overshadowed by Apple and Android. The coveted third position is the only place that Windows Phone and BlackBerry can contend for, which will likely lead to a back and forth between the two operating systems for the near future.

Looking ahead
Investors need to consider a few things that have yet to be revealed for BlackBerry. First, the Z10 just launched in the U.S., and although it's doubtful the device has tons of pent-up demand, it's still hard to say that Windows Phone takes third place before a much longer period of sales have been factored in.

Second, BlackBerry still has markets where its BB10 operating systems hasn't launched yet. Until the new system is rolled out across the globe, it'll be hard to nail down who indeed is holding the No. 3 spot. And finally, BlackBerry hasn't release its newest phone, the Q10, yet. With a launch coming in April or May, some consumers may be holding off on a BlackBerry purchase until the Q10 comes out.

Whether or not these three scenarios will help BlackBerry hold (or take back) the third spot is yet to be seen, but to consider the company TKO'd out of its No. 3 position right now may be calling the fight too early.