Great news: Americans are giving up on one of the most ruthless destroyers of wealth the numerically challenged have ever known: Credit cards. 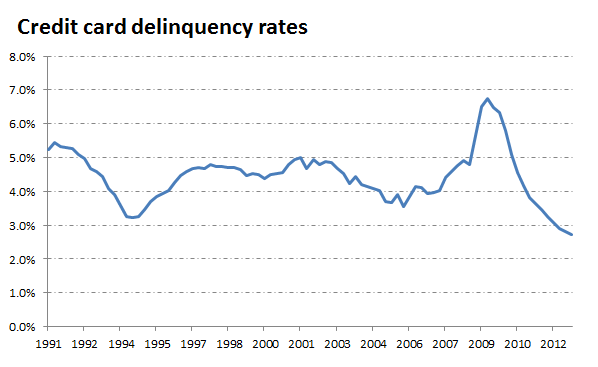 Consider that the unemployment rate in 2000 was 4%, versus 7.7% today, and these numbers are astounding. No job? Pay cut? Doesn't matter. We're more current on our credit card bills than we've been in decades.

How is that possible? In part, it's because the most egregious lending made to borrowers who never stood a chance of repayment has been defaulted on and written off.

But there's more to it than that.

If you look at this data from Card Hub, you'll see that total credit card debt outstanding fell by about $200 billion from 2008 to 2012. During that time, banks wrote off $208 billion of bad credit card debt. So, the net increase in credit card debt between 2008 and 2012 was perhaps $8 billion, or virtually flat when compared to the $800 billion of debt outstanding. Inflation during that period totaled about 10%, and the U.S. population increased by 10 million. Debt in real, per-capita terms, therefore, is declining in excess of defaults. People are really, truly shunning credit cards.

In fact, real credit card debt per capita is now at the lowest level since 1996, and down by a quarter since the peak in 2007: 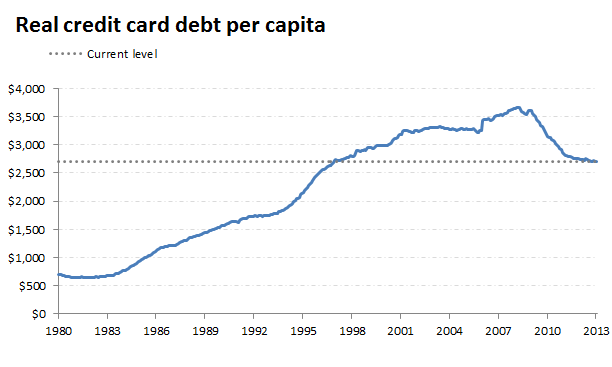 Another is that the number of cards in circulation is flatlining, or even declining slightly. Take Visa (V -0.71%). While its debit card business is booming, the number of credit cards it had outstanding fell from 2009 to 2011, and as of the end of 2012, it was about flat from three years earlier: 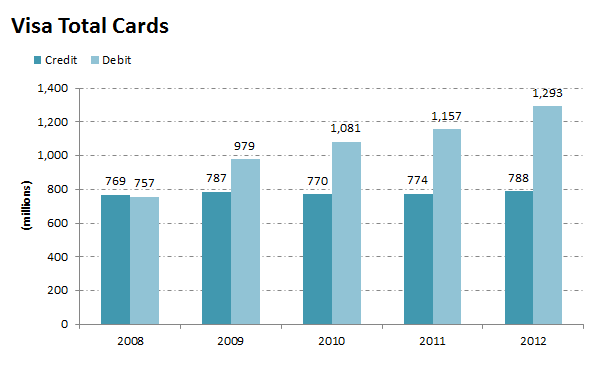 I won't burden you with another chart, but the pattern is similar for MasterCard (MA -0.92%). We're just much more interested in debit cards than credit cards these days.

Which is great, frankly. Consumers are left with stronger finances. The three big credit card issuers -- Citigroup, Bank of America (BAC -1.02%), and JPMorgan Chase (JPM -0.70%) -- are left with stronger balance sheets. And the old style of American consumerism, one built on debt, may be coming to an end. Total household debt as a share of GDP has been declining for five years.

Is this a new trend? An enduring one that won't revert back to the old, unsustainable ways? Let's hope so. Good riddance, credit cards.