The Dow is unchanged, but these three stocks are all up 1%.

There was one U.S. economic release today.

Following yesterday's disappointing private-sector jobs report, all eyes were on today's unemployment claims report. Seasonally adjusted unemployment claims came in at 385,000, which is 28,000 higher than last week and 35,000 above analyst expectations. The jump moved the four-week moving average up by 11,250 to 354,250. 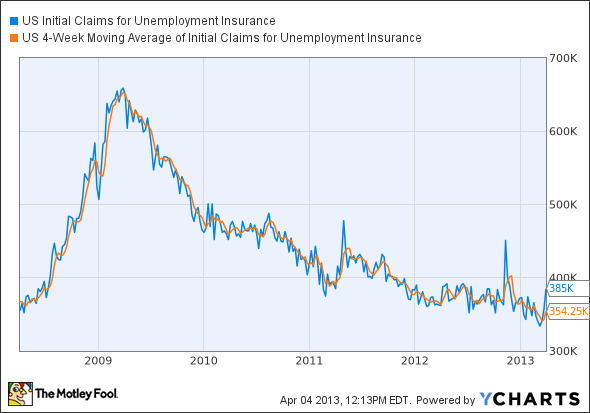 The jump may not be as bad as it appears. Economists from the Department of Labor seasonally adjust the numbers so that you can compare them across the year, taking into account seasonal fluctuations. For instance, extra workers hired before Christmas for the sales rush lower unemployment claims, so unemployment claims are adjusted upward to compensate. The end of March is a tough time to determine an appropriate adjustment, as some economists believe holidays and spring breaks cause the Department of Labor to seasonally adjust claims too much.

The actual number of unemployment claims, i.e., non-seasonally-adjusted unemployment claims, actually fell by 1,600 to 314,000. Investors thus see today's number as a technical jump and not a real one and are thus overlooking the bad report. Tomorrow brings the much-anticipated jobs report for March. Analysts expect jobs growth of just 190,000 versus 236,000 in February.

Today's Dow leader
Today's Dow leader is AT&T (T 1.43%), up 1.3%. Yesterday rumors surfaced, but were later denied, that AT&T and Verizon would team up to purchase Vodafone, with Verizon taking over Vodafone's 45% stake in Verizon Wireless and AT&T getting the international operations of Vodafone. Today's big news is the Facebook phone event, where analysts speculate the company will announce a "Facebook Phone." AT&T and Verizon are loath to let another company create experiences between itself and people who use its network.

Second for the Dow today is Hewlett-Packard (HPQ 5.62%), up 1.3%. Yesterday HP plunged 5.2% after Goldman Sachs analyst Bill Shope downgraded the stock to sell. Shope believes that low sales will hurt prices and margins, that investors are overconfident in the turnaround of the business, and that the stock has run up too far. Today HP is gaining as some investors hope yesterday's drop was a buying opportunity.

Third for the Dow today is McDonald's (MCD -0.99%), up 1%. McDonald's hit a 52-week high this morning of $100.72 before dropping back slightly. McDonald's employees are on strike in New York City, but it looks like nothing can stop the ubiquitous burger-seller from moving forward. McDonald's is one of Fool analyst Russ Krull's top-two holdings. You can read his pitch and find out why.