The beverage and snack giant is on the elite list of Dividend Aristocrats. Here's how it got there.

Investors have always been interested in stocks that pay dividends, but lately, low interest rates on bonds and other fixed-income investments have made solid dividend payers even more valuable. Among the most promising dividend stocks in the market is PepsiCo (PEP 1.34%), and one big reason is that it is one of the few exclusive companies to make the list of Dividend Aristocrats. In order to become a member of this elite group, a company must have raised its dividend payouts to shareholders every single year for at least a quarter-century. Only a few dozen stocks manage to make the cut, and those that do tend to stay there for a long time.

Some see PepsiCo only as an also-ran in the soft-drink market, perennially lagging behind Coca-Cola. But even though Coke has the No. 1 brand in the world and a much bigger presence in the pure beverage market, PepsiCo's snack-foods division gives it a vital source of diversification and growth that fits extremely well with its extensive distribution network. Let's take a closer look at PepsiCo to see whether it can sustain its long streak of rewarding dividend payouts to investors.

Has PepsiCo been perking investors up lately?
PepsiCo isn't just a dividend giant; it also stands as one of the 25 best companies in America, with its dedication to workers, customers, and shareholders. A key driver for PepsiCo's status among the nation's industry leaders is its strategic vision, with CEO Indra Nooyi having been early to realize that trends toward greater awareness of health and nutrition would give PepsiCo an opportunity as an early adopter of healthier products. In light of the concerns about obesity and diabetes that have hit PepsiCo, Coke, and other players in the soft-drink industry, Nooyi's foresight has proven invaluable in giving the company a head start on diversifying its product base, and responding proactively to changing demand.

In addition, PepsiCo has realized the importance of having an image as an innovative company. A big marketing push on its core brands helped boost sales substantially during the fourth quarter of 2012, and the company has positioned its new Kickstart sparkling caffeinated juice blend to go up against Monster Beverage and other big players in the energy-drink space. Expanding geographically has also been a key source of growth for Pepsi, with success in Russia and ongoing plans to bolster its presence in China and India representing important strategic moves for the company. 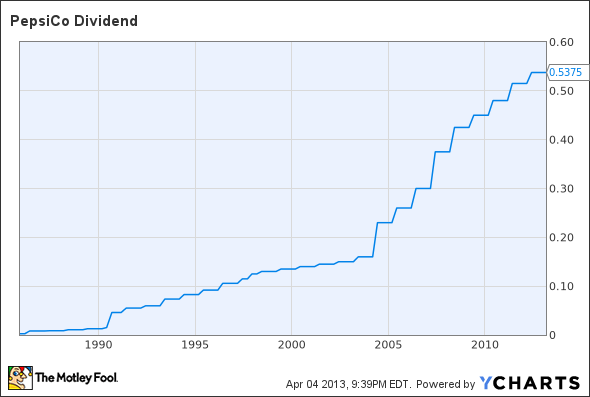 As you can see, PepsiCo has managed to keep its payouts strong over the years. Yet, like any company with a decades-long track record of raising dividends, PepsiCo faces its share of challenges. Although it has done a better job than Coke at keeping its North American beverage sales up, PepsiCo still has a tough road ahead to navigate the threats to its earnings growth.

Perhaps the most interesting piece of news for PepsiCo involves speculation that it will merge with fellow snack giant Mondelez International (MDLZ 1.55%), which got spun off from Kraft Foods last year. Neither company substantiated the rumors, which were largely based on the fact that activist investor Nelson Peltz's Trian Fund Management had taken substantial positions in both companies. The combination of the two companies would create a massive business that might raise some antitrust concerns, but given the merger and acquisition activity elsewhere in the food space, the prospect for a Pepsi/Mondelez combination is nevertheless intriguing.

When will dividends rise again?
Because it's been almost a year since PepsiCo last raised its dividend, the company is almost due for another increase. Last year's increase of just over 4% represented a slower pace of growth than dividend hikes in previous years, suggesting that slow sales volumes in Pepsi's domestic beverage market might be forcing the company to hang onto more of its free cash flow. Yet, with decades of dividend increases in its history, PepsiCo seems poised to take advantage of global growth opportunities to keep shareholders happy well into the future.

Click here to add PepsiCo to My Watchlist, which can find all of our Foolish analysis on it and all your other stocks.