Let's see what the numbers say about Kodiak.

Investors love stocks that consistently beat the Street without getting ahead of their fundamentals and risking a meltdown. The best stocks offer sustainable market-beating gains, with robust and improving financial metrics that support strong price growth. Does Kodiak Oil & Gas (NYSE: KOG) fit the bill? Let's take a look at what its recent results tell us about its potential for future gains.

What we're looking for
The graphs you're about to see tell Kodiak's story, and we'll be grading the quality of that story in several ways:

What the numbers tell you
Now, let's look at Kodiak's key statistics: 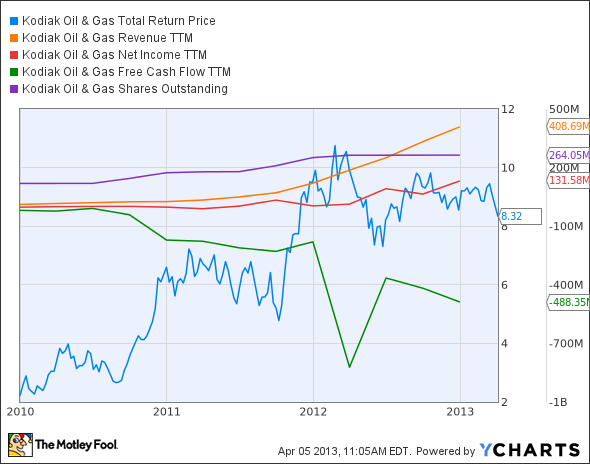 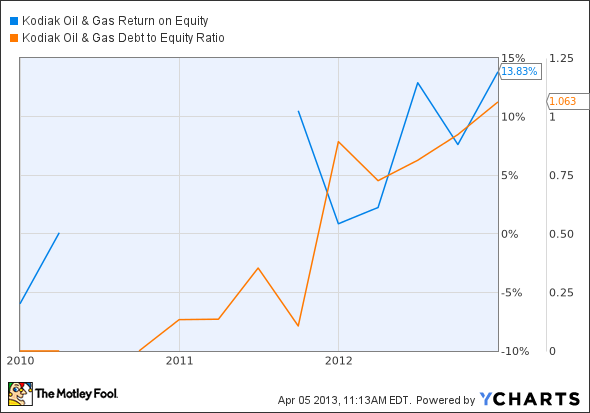 How we got here and where we're going
Kodiak puts up the sort of strong performance -- with some caveats -- that you might expect out of a fast-growing oil exploration upstart. Free cash flow is in the tank, and debt has risen dramatically, but shouldn't investors expect such financial trends of a company that's rapidly expanding its production capacity? The major concerns going forward will revolve around whether this dramatic growth can continue, and whether it can continue in a way that will reverse the free cash flow bleed and bring debt to equity back down again.

Some of our Foolish energy analysts have taken a closer look at Kodiak since its latest earnings report, and they've generally come away with positive conclusions. Contributor Matt DiLallo points out that Kodiak's debt is offset by a fairly deep pool of liquidity, and that Kodiak has done a much better job than larger peers Chesapeake Energy (CHKA.Q) and SandRidge Energy (NYSE: SD) at operating within its financial capacity, which means it's unlikely to be forced to sell large swaths of promising acreage, as both companies have in the past year. Although free cash flow remains in the dumps, Kodiak's operating cash has moved into positive territory.

Matt points to Kodiak's high cost of drilling a well problem as one problem area preventing stronger cash flows. At roughly $10 million per well, Kodiak's sinking wells with far less fiscal prudence than fellow Bakken players Whiting Petroleum (WLL) or Continental Resources (CLR 4.45%), which both report well costs in the $8 million range. If the company can clamp down on this cost, it should be able to move closer to (or into) positive free cash flow territory. On the other hand, Kodiak's wells have some of the lowest drilling times in the Bakken -- it may simply be able to move toward a less-rushed timetable as its resource base widens, without enacting any major technological changes.

Kodiak hasn't quite won the market's respect yet, as more than 10% of its shares were sold short at the end of 2012. That number's at 12% as of this writing, which points to continued uncertainty over the company's ability to control costs as it grows. Answering this concern would mark Kodiak as a clear winner in the oil and gas space, but it's definitely one to keep an eye on right now.

Putting the pieces together
Today, Kodiak has many of the qualities that make up a great stock, but no stock is truly perfect. Digging deeper can help you uncover the answers you need to make a great buy -- or to stay away from a stock that's going nowhere.