Let's see what the numbers say about hhgregg (HGG).

Investors love stocks that consistently beat the Street without getting ahead of their fundamentals and risking a meltdown. The best stocks offer sustainable market-beating gains, with robust and improving financial metrics that support strong price growth. Does hhgregg (HGGGQ) fit the bill? Let's take a look at what its recent results tell us about its potential for future gains.

What we're looking for
The graphs you're about to see tell hhgregg's story, and we'll be grading the quality of that story in several ways:

What the numbers tell you
Now, let's take a look at hhgregg's key statistics: 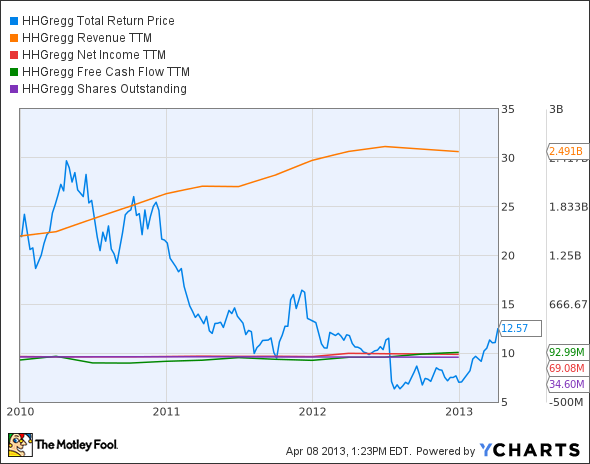 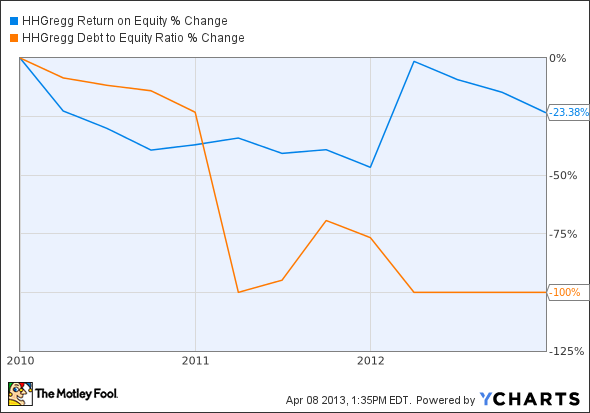 How we got here and where we're going
With the exception of a weaker profit margin, hhgregg puts forth a surprisingly strong performance for such a hated stock. Five out of seven passing grades is nothing to sneeze at, but with a share price nearly cut in half over the last three years, we really should ask: Is the market wrong, or are these numbers completely meaningless for the future? Let's dig a little deeper to find out.

Although hhgregg's three-year performance has been decidedly underwhelming, it's joined fellow brick-and-mortar electronics retailers Best Buy (BBY -1.84%) and RadioShack (RSHCQ) in a bit of a 2013 rebound. None of these companies has actually shown progress -- in fact, all three suffered same-store sales declines, and hhgregg's took the worst fall, with its similar "comparable-store" metric down 8.3% for the holiday quarter. Since Best Buy's same-store results were essentially flat domestically, hhgregg investors ought to be seriously concerned about its long-term viability in a shrinking sector. Despite this threat, hhgregg's shares were already moving higher during the actual holiday season, particularly after a November earnings report sent shares spiking.

However, there's one obvious reason to appreciate hhgregg in spite of its flaws: It's still profitable. Recent earnings reports from Best Buy, RadioShack, and specialty retailer GameStop (GME -6.70%) all took floundering shares from value to value trap territory, and even prior to those reports, all posted higher valuations than hhgregg: 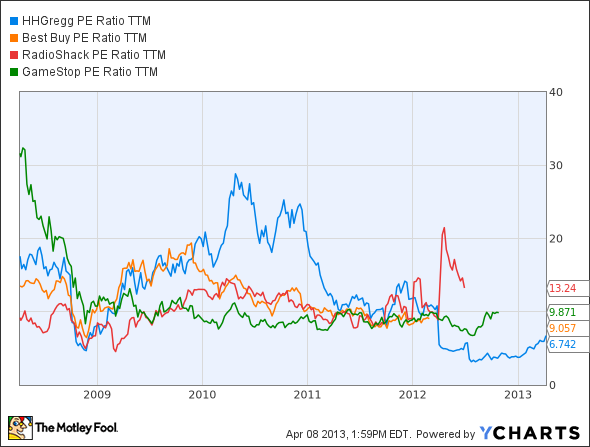 Conn's (CONN -3.56%) doesn't look good on this chart, so I left it out, but the gist is that it's been inconsistently profitable and is currently more than three times as highly valued as hhgregg, even though analysts project similar growth for both companies over the next five years. The only real advantage Conn's has is a better one-year forward growth rate, but even that only pulls its forward P/E roughly in line with hhgregg's 14 to 16.

The sad fact is that this entire sector of the economy may have little reason to exist as it's currently constituted. You can buy virtually anything found at Best Buy, RadioShack, GameStop, or Conn's online (whether on a certain Bezos-led e-retailer or not), and most of these retailers haven't shown that they can claim a niche valuable enough to justify investor optimism. Conn's has a bit more investor appeal in its big-ticket diversity, but there may be room in the market for the appliance-centric hhgregg -- if it can attract customers. Its latest earnings report shows that this remains an uphill battle.

Putting the pieces together
Today, hhgregg has some of the qualities that make up a great stock, but no stock is truly perfect. Digging deeper can help you uncover the answers you need to make a great buy -- or to stay away from a stock that's going nowhere.

What to Make of Best Buy's Holiday Sales
Conn's and hhgregg Are No Best Buy, Folks

1 Retail Stock to Ditch in 2015
Can This Hard-Goods Retailer Successfully Turn Around?