Please ensure Javascript is enabled for purposes of website accessibility
Log In Help Join The Motley Fool
Free Article Join Over 1 Million Premium Members And Get More In-Depth Stock Guidance and Research
By Steve Symington - Apr 8, 2013 at 10:20AM

It certainly wasn't a hasty decision; I've kept the company in my sights for the better part of the last two years, and even initiated an outperform CAPScall on the stock last September.

While that call has outperformed the broader market by more than 12% so far, those of you who've kept track probably know 3D Systems has taken investors on one heck of a ride since then: 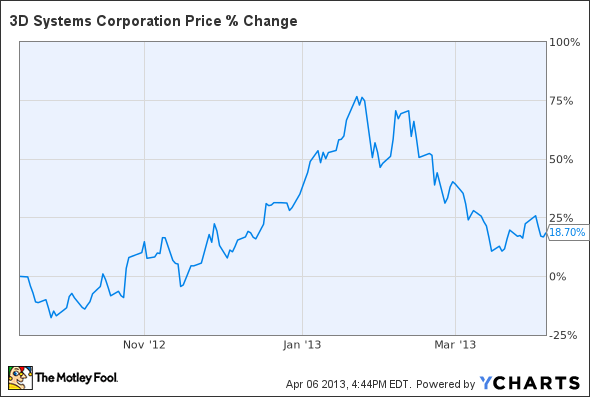 So why did I finally take the plunge? It surely wasn't the valuation, especially considering 3D Systems was trading around 70 times trailing earnings even after falling more than 30% from the 52-week-high it had set less than three months ago. Though that pullback admittedly made my decision a little easier, it merely brought the price down from "absurd" to something closer to "terribly expensive." Still, the stock looks much more palatable now that shares are trading at a much more respectable 24 times forward earnings estimates.

This, in part, highlights the fact that the real allure of 3D Systems lies in its future ability to play a central role in redefining manufacturing as we know it. Even so, many prospective investors remain skeptical as truly wide-scale adoption currently seems out of reach given 3-D printing's relatively limited consumer utility.

On one hand, I suppose you can't blame them, since many 3-D printed products find their place behind the scenes in niche markets like medical implants and custom parts for motorcycles, cars, and the aerospace industry.

To be sure, 3D Systems is one of only a few companies beginning to place significantly more focus on the consumer market with its Cube line of desktop printers. However, the devices are limited to using just two types of plastic printing materials, and they've only recently graduated to printing in up to three colors:

Baby steps in 3-D printing
Big whoop, right? It's nice to see a change from the same old monochrome trinkets, but why should anyone be excited about a gimmicky hobbyist printer which starts at around $1,300 and can only let us make trinkets?

To answer that question, remember what our fellow Fool Isaac Pino reminded us a few weeks ago: high-end production 3-D printers from companies like 3D Systems, Stratasys (SSYS 1.82%), and ExOne (XONE) are capable of using dozens of materials to print infinitely more complicated items including shoes, saws, guitar bodies, and other functioning tools with moving parts. Heck, 3-D bioprinting specialist Organovo (ONVO 2.84%) is currently working feverishly on perfecting the process of designing and creating functional human tissue which -- putting inevitable regulatory hurdles for using the technology aside -- could obviously change the health care world as we know it.

Then there's iRobot (IRBT 5.85%), which filed a patent recently for what it's calling a Robotic Fabricator, or a 3-D printer which can print and assemble a robot without the need for human interaction. While we likely won't see this awesome invention implemented anytime soon, it also serves as another reminder of the industry's potential.

Now 3D Systems isn't directly involved in every one of the above-mentioned innovations, but remember that the steam propelling additive manufacturing in general has been building for decades. And 3D Systems, for its part, boasts the most comprehensive portfolio of 3-D printing solutions out of any other company, largely thanks to multiple acquisitions over the last few years.

Foolish final thoughts
This doesn't mean 3D Systems will be the only company to benefit in the space. To the contrary, I also own shares of iRobot and fully intend to add Stratasys to my portfolio down the road.

In the end, I'm convinced its only a matter of time until 3-D printing solidifies its place as a permanent fixture in our everyday lives. Unless some miraculous unforeseen event manages to change my opinion, I plan on holding shares of 3D Systems in my portfolio for decades to come.