Please ensure Javascript is enabled for purposes of website accessibility
Log In Help Join The Motley Fool
Free Article Join Over 1 Million Premium Members And Get More In-Depth Stock Guidance and Research
By Matthew DiLallo - Apr 9, 2013 at 10:31AM

SandRidge is one of the more interesting emerging oil plays on the market. Here are three reasons why you'd want this company in your portfolio.

Over the past few years SandRidge Energy (NYSE: SD) has undergone several transitions, which has dramatically altered the company and in some ways clouded its investment picture. In an effort to simplify the investment thesis, I've distilled everything down to three reasons why you'd buy shares of the company.

1. SandRidge is the top lease holder and most active driller in the Mississippi Lime formation. The central thesis to an investment in SandRidge is your belief in the company's Mississippian growth plan. While the company has operations in the shallow water of the Gulf of Mexico and the West Texas Overthrust, SandRidge is virtually synonymous with the Mississippian. It has twice the wells as its closest competitor, Chesapeake Energy (CHKA.Q). It's running three times the number of drilling rigs as Devon Energy (DVN 0.59%). As you can see in the slide from a recent SandRidge Energy investor presentation below, the company is simply head-and-shoulders above its competitors in the play: 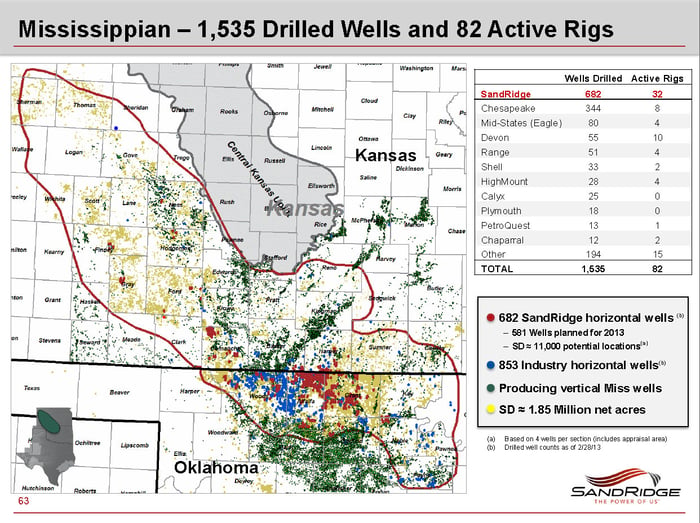 The company has also spent nearly half a billion dollars to build out its own saltwater disposal system and it's even installed its own electrical grid. It's done all this in an effort to get its well costs down as low as possible. These wells, which produce on average 45% oil and natural gas liquids along with 55% natural gas, yield a very high rate of return for the company. That rate is increased thanks to the aforementioned infrastructure investments.

The rest of the energy industry is beginning to take notice of the play's potential. Phillips 66 (PSX -0.60%) recently signed a deal to get Mississippian oil shipped to a local refinery. When added to SandRidge's recent percent-of-proceeds natural gas liquids contract with Atlas Pipeline Partners (NYSE: APL) we're beginning to see some validation of the Mississippian's tremendous potential for SandRidge.

2. The company has improved its financial position and its capital plan is fully funded through 2014 with multiple options to fund its plan through 2015. Like most of the smaller oil and natural gas exploration and production companies, SandRidge has more potential for growth than it can fund through its current cash flow. That's forced the company to sell assets, including the recent sale of its Permian Basin acreage. That deal provided enough capital to enable the company to pay down its debt, while fully funding its capital plans through the end of next year. The company has a variety of options to access additional funding which puts it on very solid financial footing for the first time in years.

The bottom line here is that you're investing in SandRidge because you believe in the future of the Mississippian. While that is an important part of the story, it's by no means the whole story.