Three of the best dividend stocks for long-term investors.

Stable, dividend-paying stocks may not be as exciting as their more volatile non-dividend cousins, but there's a reason world-class investors like Warren Buffett love them.

Over the long term, dividends are undoubtedly the lifeblood behind overall stock market returns. Take a look at the gains over the past decade for both the S&P 500 and the Dow Jones Industrial Index, with dividends ("Total Return") and without them: 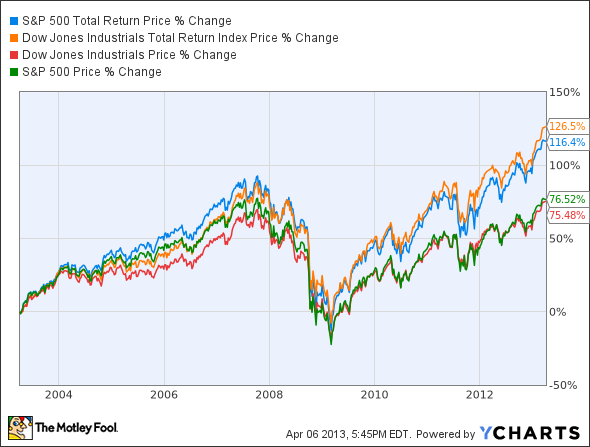 Of course, even without dividends, the indexes still turned in a respectable performance. However, the inclusion of dividends added a whopping 51% and 40% to the Dow and S&P 500's returns over the past 10 years, respectively.

So which dividend stocks should you buy for the long haul? Here are three possibilities:

This ain't Monopoly money
Despite trading near 52-week-highs, I'm convinced toy maker Hasbro (HAS 1.27%) has what it takes to keep shareholders happy for decades.

In addition to being the name behind such perennial hit games as Magic: The Gathering, Twister, Monopoly, and Battleship, Hasbro is also poised to benefit by creating merchandise for every blockbuster movie from entertainment giant Disney, so you can bet it was happy when Disney announced plans for multiple new Star Wars movies following its acquisition of Lucasfilm late last year.

In the meantime, Hasbro can look forward to renewed sales from next year's new installment of the Transformers movie franchise, and long-term investors can rest easy collecting a solid 3.7% dividend.

Clean profits from a dirty business
If you're looking for another durable long-term business, look no further than garbage disposal and recycling expert Waste Management (WM 1.91%).

While the stock doesn't look particularly cheap at nearly 22 times trailing earnings, its 3.8% dividend should help in the long run.

Graphics chips and much, much more
Last but not least, thanks to the initiation of its inaugural dividend late last year, I'm happy I can now include NVIDIA (NVDA 5.38%) in the list of my favorite dividend stocks. After all, the graphics chip specialist currently trades for less than 14 times trailing earnings and had a jaw-dropping $3.73 billion in cash on its balance sheet at the end of its most recent quarter. This, for those of you keeping track, represents nearly half NVIDIA's entire market capitalization.

NVIDIA has been incredibly busy lately, building a moat of its own as it strives to become a one-stop shop for all things graphics processing. In addition, its recently announced Tegra 4i is poised to give competing mobile chips from the likes of Qualcomm a run for their money. If NVIDIA can steal any meaningful market share from Qualcomm in the mobile segment alone, it's a safe bet that patient, long-term investors will be richly rewarded as both the share price and dividend continue to increase.