Please ensure Javascript is enabled for purposes of website accessibility
Log In Help Join The Motley Fool
Free Article Join Over 1 Million Premium Members And Get More In-Depth Stock Guidance and Research
By Dan Caplinger - Apr 9, 2013 at 10:18AM

If you only expect to see traditional industrial companies in the Dow Jones Industrial Average (^DJI 0.23%), then you're way behind the times. The Dow now includes companies from nearly every sector of the market.

Energy stocks don't make up a huge portion of the Dow, with only two traditional integrated oil and gas companies in the average. But given their size, those stocks have a big impact on the Dow. Let's take a look at how these companies have fared so far in 2013 and what their prospects are for the rest of the year and beyond. 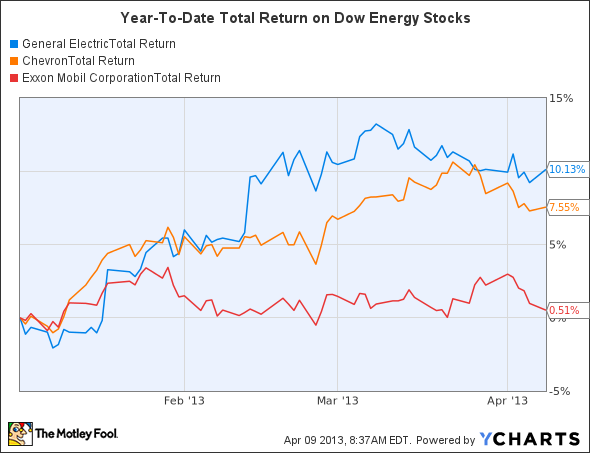 It's no mistake that I've included General Electric (GE 0.94%) on this list. Despite the extensive reach that the conglomerate has across many industries, GE has focused heavily on energy as part of its core strategy for boosting its growth. Just yesterday, GE reaffirmed its commitment to energy by making a buyout bid for Lufkin Industries (NASDAQ: LUFK), boosting its presence in the oil services sector and building more capacity as it grows into an energy infrastructure giant. GE's exposure to the booming energy sector is a big part of how it has been able to recover so strongly from its financial-crisis depths.

For Chevron (CVX 1.65%) and ExxonMobil (XOM 1.45%), on the other hand, production and pricing have been ongoing obstacles to growth. Given their size, it's incredibly difficult for these oil supermajors to find enough new energy-producing assets to make up for the natural rate of decline in any given well's production levels. Yet although Exxon is projecting just 2% to 3% annual growth in production over the next four years, Chevron hopes for better results, with its plan to raise its production by a million barrels per day representing growth of between 9% and 10% annually.

Meanwhile, the energy boom has once more heightened environmental concerns over oil and gas production and transportation. Exxon's recent Arkansas spill from a crude-oil pipeline break and Chevron's ongoing multibillion-dollar environmental lawsuit in Ecuador highlight the importance of responsible development in avoiding costly damages and a bad reputation.

To start performing to their full potential, energy stocks need the support of stronger overall economic growth. Once the global economy starts firing on all cylinders, demand for oil and gas should start supporting prices and creating more profit for Exxon and Chevron. Meanwhile, so long as companies are looking for energy, GE stands poised to help them find it -- and take its fair share of the profits in the bargain.

Fool contributor Dan Caplinger has no position in any stocks mentioned. You can follow him on Twitter @DanCaplinger. The Motley Fool recommends Chevron. The Motley Fool owns shares of General Electric. Try any of our Foolish newsletter services free for 30 days. We Fools may not all hold the same opinions, but we all believe that considering a diverse range of insights makes us better investors. The Motley Fool has a disclosure policy.